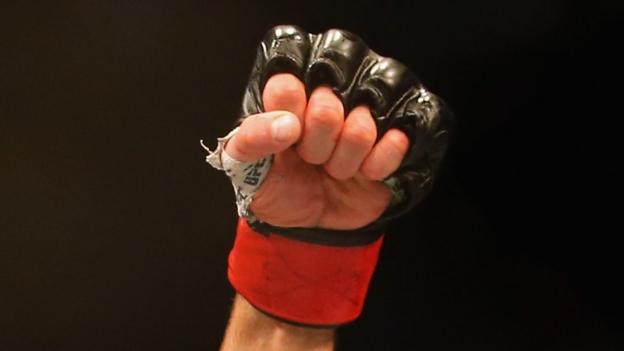 Cage fighters are risking their lives by taking extreme weight-loss measures before fights, according to academics.

Mixed martial arts (MMA) is one of the fastest-growing and most controversial sports in the world.

A UK-based study has found some competitors are dehydrating themselves to dangerous levels.

The International Mixed Martial Arts Federation said work is being done to educate fighters on how to manage their weight safely.

The sport, which combines techniques from wrestling and martial arts, is banned in France, but attracts millions of television viewers across the globe.

It is becoming increasingly popular in the UK and Ireland as a result of high-profile stars such as Dublin's Conor McGregor.

As a combat sport, those who take part say they know and accept the risk of injury in the cage as a result of blows to the body and head.

But Ben Crighton from Liverpool Moores University's School of Sport and Exercise Sciences says many are risking their lives before they even get into the cage by severely dehydrating themselves in order to meet strict weight limits.

Severe dehydration can cause kidney failure and other health problems. In extreme cases it can be fatal. Medical research has also shown it can increase the risk of brain injury during a fight.

He said he had found "alarming weight cutting behaviour in mixed martial arts".

"Such losses are greater than in other combat sports, likely due to the requirement to possess higher lean mass for grappling and the significant time between weigh-in and competition," he added.

MMA fighters are generally weighed 24 hours before a bout, with many dehydrating themselves to lose weight in the hope they can then rehydrate before the fight the following day.

In recent years a number of fighters have become ill or have died from complications associated with severe dehydration.

In September 2013, Leandro Souza, 26, from Brazil died after reportedly attempting to lose 20% of his body mass in seven days. Chinese fighter Yang Jian Bing, 21, died before a fight in December 2015 after suffering extreme dehydration trying to meet the weight limit.

Mr Crighton said a limited number of weight categories in MMA meant fighters had to lose more weight than boxers to drop a classification.

He found professional fighters were losing the biggest amount of weight, with one fighter losing 7.4kg - nearly 11% of his body weight - in the 24 hours before a fight.

He found only 20% of professional fighters took advice from qualified nutritionists, with many using techniques they'd found out about on the internet, such as sitting in a sauna or hot bath for long periods of time, and starving themselves.

Nearly 70% of the professionals he spoke to said they had engaged in water loading, which involves drinking excessive amounts of water to force the body to expel it.

And 17% said they had taken prescription or over-the-counter diuretics.

The study found 61% admitted taking supplements without knowing whether they contained banned substances or not. Others said they had used intravenous lines to rehydrate themselves after being weighed.

Amateurs reported losing up to 10kg in the week before a fight and up to 7kg in the 24 hours before, with some saying they had shed weight 20 times in a year.

Nearly 10% exhibited the classic signs of having an eating disorder.

In February this year Dhafir Harris, whose fighting name is Dada 5000, suffered renal failure and two heart attacks during a fight after losing 25% of his body weight.

He told 5 live Investigates he had to have months of dialysis and treatment to help him recover.

"I wouldn't wish the last couple of months of my life on anybody," he said.

The BBC also spoke to an amateur MMA fighter who said he suffered kidney damage after losing weight for a fight. As a result, he was forced to retire from the sport on the advice of his doctor.

Joe Neill said: "I'd water load. I'd drink eight litres, then six, then 24 hours before weigh-in I'd drink one litre and then nothing. Then you get in the sauna and a hot bath and you sweat the rest of the weight off.

"As I was cutting weight I was struggling. I had to be placed back into the bath because I was so weak. I weighed in for the next day but I lost that fight."

Neill added: "After that I started getting pains in my side. I went to the doctors. They said my kidney function was down.

"When I explained the process of cutting weight, they were hugely concerned by that and said I had to stop. That scared me, to be honest.

"You are basically sweating yourself to the edge of death.

"There is always that risk that someone will lose their life. No-one thinks it's going to be them. It's ridiculous what I was doing."

As a relatively new sport in the UK and Ireland there is no regulatory body to ensure businesses, or promoters who organise MMA fights, take measures to safeguard the welfare of competitors, although big promoters say they do take safety very seriously.

In a bid to address safety concerns, a voluntary organisation, Safe MMA, was set up by fighters, business people, industry experts and doctors.

The organisation works closely with the International Mixed Martial Arts Federation (IMMAF) and its UK equivalent, which represents those involved in all aspects of the sport.

A spokeswoman for IMMAF said: "Extreme weight-cutting practices are a concern in MMA and are strongly condemned as a dangerous risk to athletes by IMMAF and its medical committee."

She said those taking part in IMMAF-approved or organised amateur tournament events taking place over a series of days were encouraged to compete at their "walk around" weight. She said they were also weighed more frequently and closer to the fight and had to pass medical examinations before and after each fight.

She added IMMAF was proposing to introduce a mandatory online educational course on weight-cutting risks, to be included in the online registration application form for IMMAF competitions.

She said the organisation would not oppose the introduction of more weight categories in the sport if it could be shown that it would reduce extreme weight-cutting.

Bellator, which organised Dada 5000's fight, is one of the biggest companies involved in MMA.

A spokesman said the company prided itself on looking after the safety of athletes, funded brain health research and insisted all fighters passed a number of medical tests before competing.

5 live Investigates is on BBC 5 live on Sunday 8 May at 11:00 BST. Listen online or download the programme podcast.