England international Vardy is hoping to hold talks with Leicester over an improvement to the £70-000-a-week contract he signed in February. (Times - subscription required)

The Foxes could break their transfer record to try to sign 27-year-old Lucas Perez, who is Spanish club Deportivo La Coruna's leading scorer this season. (Guardian)

Leicester manager Claudio Ranieri is also interested in signing Pescara striker Gianluca Lapadula, 26, as he tries to bolster his squad for next season. (Sun)

Meanwhile, Tottenham manager Mauricio Pochettino has been spotted having lunch with former United boss Sir Alex Ferguson in London, sparking speculation the Argentine could be heading for Old Trafford this summer. (Daily Mirror)

Arsenal forward Alexis Sanchez, 27, could end his two-year stay with the club this summer, with Serie A champions Juventus leading the race for the Chile international's signature. (Daily Mail)

The Gunners are closing in on the signing of midfielder Granit Xhaka, with a £33.8m bid ready to be made and the 23-year-old's club Borussia Monchengladbach looking for a replacement. (RP Online via Daily Star)

Chelsea captain John Terry, 35, will learn if he has a future at the club this week after being summoned to a meeting with two of owner Roman Abramovich's key aides, Marina Granovskaia and Michael Emenalo. (Times - subscription required)

Chelsea have had a £23m bid plus performance-related bonuses for midfielder Radja Nainggolan, 28, rejected by Italian club Roma. (Guardian)

Incoming Chelsea boss Antonio Conte is planning talks with Belgium international Courtois to try to convince him to stay at the London outfit. (Daily Telegraph)

Liverpool are the prime candidates to sign Monaco midfielder Thomas Lemar, but Bayern Munich and Atletico Madrid are also watching the 20-year-old. (L'Equipe via Daily Express)

Swansea City are considering a return for 27-year-old Manchester City striker Wilfried Bony, who has made just 15 Premier League starts since leaving Wales for the Etihad Stadium in January 2015. (Daily Mail)

Former Arsenal defender Tony Adams, 49, is in talks to become the next manager of Danish club Brondby. (Guardian)

Former Newcastle United midfielder Dietmar Hamann believes manager Rafael Benitez, 56, could be persuaded to stay with the Magpies if they are relegated. (Talksport)

Newcastle are willing to pay manager Rafael Benitez £5m a season to stay with them even if they are relegated to the Championship. (Daily Express)

Watford boss Quique Sanchez Flores says he is not worried about his future and only focused on the final two games of the season. (Watford Observer)

But the Hornets have made former Inter Milan manager Walter Mazzarri is one of their top targets to replace Quique Sanchez Flores at Vicarage Road. (Daily Telegraph)

Aberdeen are weighing up a move for Bournemouth forward Jayden Stockley, 22. (Daily Echo)

Relegated Bolton Wanderers have made "significant" cuts to their backroom staff as they prepare for life in League One. (Bolton News)

Rochdale boss Keith Hill is in the running to become the next Blackburn Rovers manager. (Lancashire Evening Telegraph)

Manchester City are expected to send five young players on loan to NAC Breda after a new tie-up with the Dutch second-tier club. (Manchester Evening News)

Goalkeeper Kelvin Davis, 39, says his testimonial game next week will be his last game for Southampton after 10 years at the club. (Daily Echo) 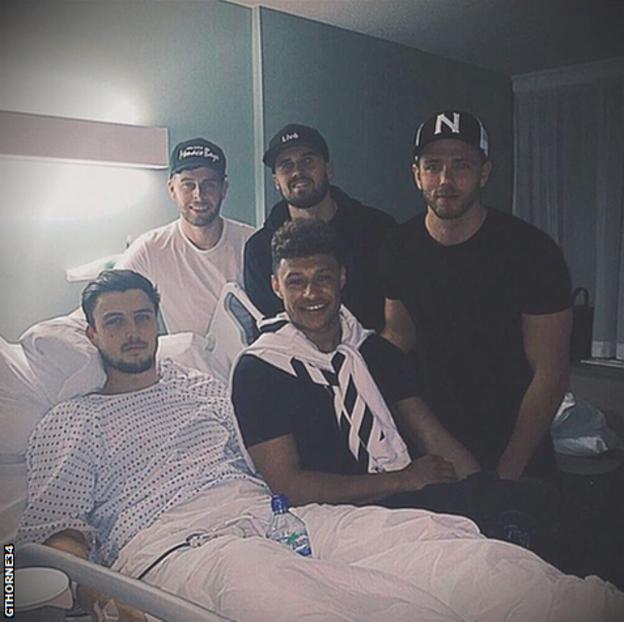 Former England defender Paul Konchesky, 34, has thanked well-wishers on Twitter after he was involved in a car accident. "Just would like to say thank you to everyone over the last couple of days for all your support and nice messages!! Feel a lucky man to have walked away from it with just cuts and bruises," wrote Konchesky, who has spent the season on loan at QPR from Leicester City.

Liverpool midfielder Joe Allen, 26, will cut his hair and beard - if he scores in the Europa League final against Sevilla on 18 May. (Liverpool Echo)

Wolverhampton Wanderers fans have handed over a petition with over 13,000 signatures opposing the club's shirt sponsorship deal with a payday loan firm. (Express & Star)