Real Madrid defender Raphael Varane, 23, will only sign for Manchester United if they appoint Jose Mourinho as manager. (Daily Star)

Jurgen Klopp has spoken to Ousmane Dembele and wants to bring the 18-year-old Rennes forward to Liverpool in a deal that could be worth almost £28m. (Guardian)

Arsenal will step up their interest in Juventus striker Alvaro Morata, 23, after Danny Welbeck was ruled out for nine months with a knee injury.(Daily Mirror)

Midfielder Ilkay Gundogan, 25, a target for incoming Manchester City boss Pep Guardiola, has been told to sign a new deal at Borussia Dortmund or leave the club. (Ruhr Nachrichten, via Manchester Evening News)

Liverpool target Mario Gotze, 23, has been told by incoming Bayern Munich manager Carlo Ancelotti he may not be needed by the German champions next season. (Suddeutsche Zeitung - in German)

Manchester United are among the bookmakers' favourites to sign Chelsea defender John Terry when the 35-year-old's contract expires this summer. (Daily Star)

But United could miss out on Villarreal defender Mateo Musacchio, as Barcelona hope to partner the 25-year-old with Gerard Pique. (Sport, via Daily Express)

Cristiano Ronaldo, 31, has agreed to stay at Real Madrid, but only if they win the Champions League. (Don Balon, via Daily Star)

Oostende's Belgium international Jordan Lukaku, brother of Everton's Romelu, believes he would suit the Premier League, with the 21-year-old defender saying he is a fan of Arsenal. (The Set Pieces)

Leicester City midfielder N'Golo Kante, 25, expects to stay at the club next season - ending the hopes of Arsenal, Chelsea and Paris St-Germain of signing the France international. (Daily Mail)

Aston Villa defender Jordan Amavi, 22, is being lined up for a move to Serie A side AC Milan. (Calcio News24, via Daily Express)

Former Chelsea boss Jose Mourinho is no closer to returning to management and has "no idea" where his next job will be. (Sirius XM, via Metro)

A Chinese consortium is close to taking over Aston Villa in a £75m deal. Villa will play in the Championship next season after relegation. (Daily Mirror)

Leeds United boss Steve Evans, 53, will be sacked this summer, with Oldham manager John Sheridan, 51, in talks to take over at the Elland Road. (Daily Mirror)

Former Chelsea and West Brom manager Roberto di Matteo has emerged as the favourite to take over at relegated Aston Villa. (Birmingham Mail)

Sporting Lisbon's Scotland international Ryan Gauld, 20, will go out on loan next season, with Huddersfield Town a possibility. (Huddersfield Examiner)

Chelsea's kit deal with Adidas will cease at the end of next season after the pair decided to terminate their current agreement six years early. (City AM)

Barcelona could be set to lose the biggest sponsorship deal in the club's history, with Qatar Airways instead opening negotiations to sponsor La Liga. (Diario AS, via Daily Mail)

After the club's relegation, former Newcastle striker Faustino Asprilla tweeted: "Welcome to the Championship; you guys worked very hard to get there!" He followed up with this picture of him, former manager Kevin Keegan and ex-team-mate David Ginola. 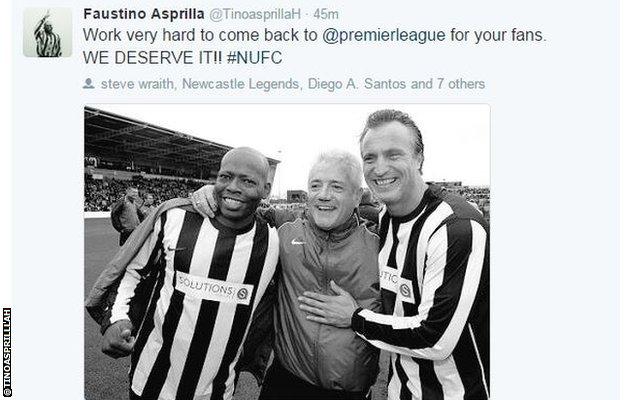 Match of the Day pundit Alan Shearer said the St James' Park outfit did not learn from their relegation in 2009, when he was their manager at the end of the season.

It was a "day of special signatures" for 38-year-old goalkeeper Gianluigi Buffon, who earned a new contract at Juventus and received a Leicester City signed shirt. He added: "Mine with Juventus until 2018 and then those of Leicester. Grazie Mister Ranieri!"

Welbeck said on his Twitter account "I will be back stronger", with the Gunners' Wales midfielder Aaron Ramsey adding: "Gutted for you, Welbz. Hope it's a speedy recovery."

Stoke City goalkeeper Shay Given joined Neil Lennon and Ally McCoist on BBC Radio 5 live for Wednesday night's football, joking he would have to keep the former Celtic and Rangers players and managers apart.

Former Cameroon international Samuel Eto'o sent a heartfelt birthday wish to old Barcelona team-mate Andres Iniesta, tweeting: "Happy Birthday to you my brother. You're such an incredible player and man, much love to you!"

Manchester City and England winger Raheem Sterling posted this picture on Instagram, adding: "Had a good afternoon with the Manchester Police Trust, discussing ways to help the community."