PSG are keen on Manchester United striker Anthony Martial and hope they can persuade the 20-year-old to make a move worth £60m with the lure of Champions League football. (L'Equipe via Daily Express)

Liverpool's Belgium striker Christian Benteke, 25, will not be at Anfield next season, according to Derby County player Dean Sturridge - the uncle of Reds forward Daniel. (NBC, via Daily Star)

Newcastle manager Rafael Benitez met the club's owner, Mike Ashley, for the first time following the win over Tottenham as the Spaniard weighs up whether to stay with the Magpies following their relegation to the Championship. (Times - subscription required)

Southampton boss Ronald Koeman has challenged the club to match his ambition if they want him to extend his contract beyond the year he has left on it. (Daily Mail)

Manchester United target Zlatan Ibrahimovic says he already knows where he will be playing next season after announcing he will leave Paris St-Germain, but the 34-year-old Sweden striker is not telling anyone. (BeIn Sports, via Metro)

Arsene Wenger wants to add three players to his Arsenal squad for next season. (Daily Star)

And majority shareholder Stan Kroenke will give the Arsenal boss the money to build on the club's best finish under the American's tenure. (London Evening Standard)

Hodgson was at Arsenal's game against Aston Villa on Sunday to watch Gunners midfielder Jack Wilshere, 24, make his first and only start of the campaign as the England boss prepares to name an initial squad of 28. (Guardian)

Colombia international Radamel Falcao, 30, currently on loan at Chelsea, will return to Monaco next season, according to the club's vice-president Vadim Vasilyev. (Goal.com)

Departing Watford boss Quique Sanchez Flores says that he "loves" the club's fans and they will be "in my head forever". (Watford Observer)

Atletico Madrid are in contract negotiations with their France forward Antoine Griezmann and the 25-year-old says he would decline transfer talks with Real Madrid manager Zinedine Zidane. (FourFourTwo)

West Ham midfielder Reece Oxford, 17, will keep West Ham waiting over a signing new contract as he is concerned over his amount of first-team football. (Daily Mirror)

Champions Leicester City will use four buses for their Premier League trophy parade through the city. (Sun)

Foxes defender Danny Simpson added on Twitter: "Great reception at Stamford Bridge today. Best season of my life which I'll never forget. Thank you to the staff, players and the fans."

Manuel Pellegrini signed off his tenure as Manchester City boss on Sunday, and striker Sergio Aguero was quick to thank the Chilean on Twitter: "My gratitude goes to Manuel Pellegrini for these years and with high hopes for what comes next. See you soon!"

Meanwhile, City midfielder Yaya Toure also had a message for Pellegrini: "I want to thank Pellegrini. He is a good man who helped us and brought City trophies. Thank you Manuel!"

Fabio Borini, who played his part in Sunderland's successful survival bid, was mobbed by away fans during the club's final game of the season at Watford.

Tottenham striker Harry Kane asked fans to see the "bigger picture" and "stay proud" after a 5-1 defeat by Newcastle saw Spurs finish the season in third. He added: "Today was nowhere near good enough. It shows we are still learning and still have a lot to improve on."

But Arsenal goalkeeper Wojciech Szczesny, currently on loan at Roma, was not feeling sympathetic towards his club's north London rivals.

Arsenal and Wales midfielder Aaron Ramsey enjoyed some family time on the Emirates Stadium pitch after the final game of the season, tweeting this picture: 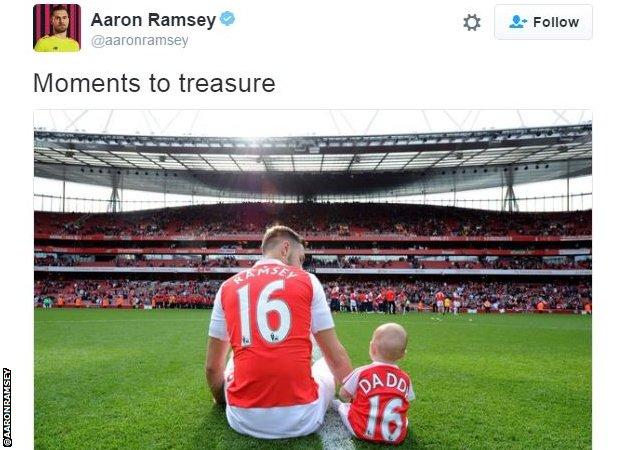 Manchester United supporters have paid for a fan from Sierra Leone, who travelled to England for Sunday's game that was postponed against Bournemouth, to attend the FA Cup final at Wembley next weekend instead. (Daily Mirror)