Manchester United are set to appoint Jose Mourinho as their new manager after Saturday's FA Cup final against Crystal Palace at Wembley. (as.com)

The father of Barcelona and Brazil forward Neymar says Manchester United made a £145m offer for the 24-year-old.(COPE, via Daily Express)

Mauricio Pochettino is prepared to sell Son Heung-Min, 23, less than a year after the South Korean joined Tottenham from Bayer Leverkusen for £22m and will also listen to offers for Nabil Bentaleb, 21, and Ryan Mason, 24. (Daily Telegraph)

Arsenal will offer Juventus forward Alvaro Morata a five-year-contract worth £155,000-a-week in order to beat Chelsea to the 23-year-old's signature. (Sun)

Chelsea remain hopeful of signing Radja Nainggolan, despite the 28-year-old midfielder's public claims that he does not want to leave Roma.(Daily Telegraph)

Everton want more than £23m for Ramiro Funes Mori following interest from Lazio in the 25-year-old, who the Toffees signed for £9.5m last summer. (Daily Mirror)

Belgium international Lukaku can speak for himself regarding his future and his dad should keep quiet, according to former Toffees midfielder Barry Horne. (Liverpool Echo)

France forward Antoine Griezmann, 25, is ready to sign a long-term contract at Atletico Madrid, despite interest from Manchester United.(Sun)

Midfielder Moussa Sissoko, 26, is being targeted by Arsenal and could be the first Newcastle player to leave following the club's relegation from the Premier League. (Daily Mirror)

The Gunners are poised to make their first signing of the summer with the acquisition of 23-year-old midfielder Granit Xhaka from Borussia Monchengladbach for a fee in the region of £35m.(Daily Mail)

Nottingham Forest will battle Blackburn Rovers for manager Neil Warnock, who has three promotions from the Championship on his CV. (Daily Mirror)

Real Betis hope to sign Chelsea midfielder Charly Musonda on a permanent basis, but believe the 19-year-old's transfer fee is "laughable".(Goal - in Spanish)

Leicester City will attempt to convince 19-year-old defender Ben Chilwell his future lies with the Premier League champions after he was linked with a move to Arsenal or Liverpool. (Leicester Mercury)

Everton are expected to hand 17-year-old midfielder Tom Davies a new long-term contract after his first-team breakthrough this season.(Liverpool Echo)

Bayern Munich defender Philipp Lahm is confident Manchester City have a coach in Pep Guardiola who is about "more than winning trophies".(Daily Mail)

Walter Mazzarri is meeting Watford's board to finalise his contract, though the club are not expected to announce their new boss until next week.(Watford Observer)

Leicester City manager Claudio Ranieri has been appointed a Grand Officer of the Italian Order of Merit, one of his home country's highest honours.(Guardian)

Foxes defender Robert Huth says people can call Ranieri the "Tinkerman or Thinkerman", but to him the boss is like "your favourite teacher at school".(BeIn Sports, via Leicester Mercury)

Bradford co-chairman Mark Lawn says the Bantams cannot afford the Football League proposals made this week to create four divisions of 20 teams in the Football League - reducing the number of home games each club play by four - and the plans "will be the straw that breaks the camel's back."(The Times)

Tottenham and Belgium midfielder Mousa Dembele, 28, says his intention was not "to do something bad" to Chelsea's Diego Costa, 27, in an altercation that cost him a six-game ban. (World Soccer)

The Olympic Stadium may not be ready for West Ham's first game of next season if the club qualify for the Europa League. (Daily Mail)

Harry Kane, one of five Spurs players in the England squad, insisted Tottenham's disappointing end to the season will not have a negative effect on preparations for Euro 2016.(The Times)

Former Crystal Palace striker Mark Bright believes the Eagles' current squad can go one better than his 1990 team-mates and make history by winning the FA Cup against Manchester United.(BT Sport)

Manchester United midfielder Ander Herrera says he came to England to win trophies, tweeting: "It's time for the FA Cup Final. It'll be tough, but we want to win this trophy for our fans."

Arsenal's Mesut Ozil tweeted this picture after joining up with Jordan's Under-17s women's team, adding: "Saw great potential in the Jordan U17 women's team. I wish them the best of luck in the World Cup." 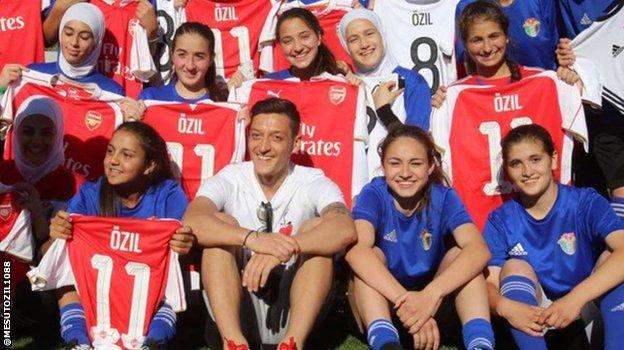 Scotland international and Stoke City midfielder Charlie Adam is a fan of Celtic's new managerial appointment, the former Rangers man posted on Twitter: "Big statement from Celtic with the appointment of Brendan Rodgers. Can't wait for next season."

Defender Adam Smith has signed a new deal at Bournemouth. But was not so impressed with the video the club tweeted alongside the announcement. "Stitched me up here," he said.

A Leicester City fan endured a seven-hour process to get Foxes manager Claudio Ranieri's face tattooed on his back. (Leicester Mercury)

A Croydon hospital has warned fans "not to get too drunk" if Crystal Palace win the FA Cup on Saturday. (Croydon Advertiser)