Jose Mourinho wants to make Real Madrid striker Karim Benzema, 28, one of his first signings as Red Devils manager. (The i)

But he faces a battle to sign Everton defender John Stones, with Manchester City and Barcelona the favourites to sign the 21-year-old England international.(Daily Telegraph)

United legend Eric Cantona believes Mourinho is not the right fit for Old Trafford "in terms of the type of football he plays" and would have preferred Pep Guardiola. (Guardian)

Assistant manager Ryan Giggs, 42, will be offered the Red Devils Under-21s manager's job in a bid to keep him at Old Trafford under Mourinho. (The Sun)

Chelsea's hopes of signing long-term target Koke this summer look to be over. The Spain midfielder, 24, says he has no intention of leaving Atletico Madrid. (London Evening Standard)

Southampton manager Ronald Koeman is set to sign a new two-year contract as the Saints look to stave off interest from Everton. (Daily Mirror)

Tottenham's Harry Kane believes he and Leicester's Jamie Vardy should be considered "among the best" strikers at the Euros. (The Times - subscription required)

Newcastle United winger Andros Townsend, 24, appears to be close to signing for Sporting Lisbon - after images surfaced of the England international apparently on a flight to Portugal. (Daily Express)

Liverpool midfielder Sergi Canos, 19, could leave the club for £4m after reaching a stalemate over a new contract. (Liverpool Echo)

Sunderland are keen on signing West Brom midfielder James Morrison, 29, on a free transfer. However, the Scotland international is reported to have been offered wages of £70,000 a week by former club Middlesbrough. (Newcastle Chronicle)

The Black Cats are weighing up a move for Lyon winger Rachid Ghezzal, 24, who has one year remaining on his contract with the French side. (Sunderland Echo)

Tony Pulis will stay on as West Brom boss as chairman Jeremy Peace is happy to keep him at the club despite criticism from fans for his style of play. (Birmingham Mail)

Crystal Palace have been linked with moves for defender Davide Santon, 25, midfielder Cheick Tiote, 29 and striker Demba Ba, 31, who all played under manager Alan Pardew at Newcastle. (Croydon Advertiser)

Middlesbrough, newly promoted back to the Premier League, are closing in on a £3.8m transfer for 21-year-old Ajax winger Viktor Fischer. (Daily Mail)

Joey Barton says he is "coming to be the best player" in Scotland after signing a two-year deal at Rangers. (Daily Record)

Republic of Ireland goalkeeper Shay Given - along with forward Jon Walters - revealed on Twitter how the team are preparing for Friday's pre-Euro 2016 friendly against the Netherlands... 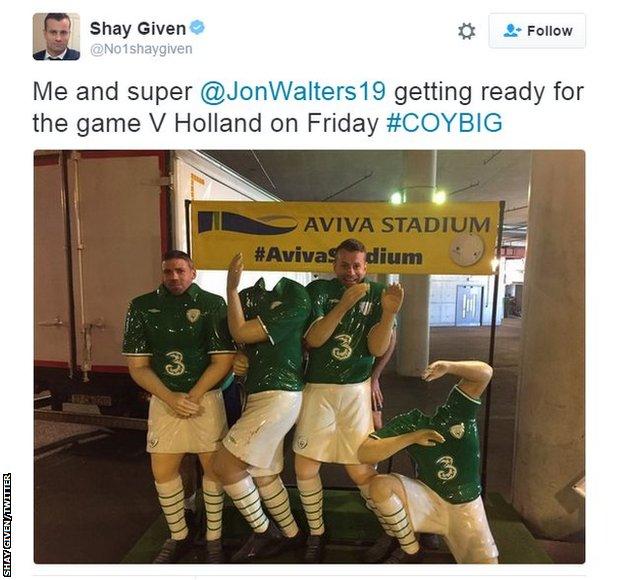 Wayne Rooney's wife Coleen could be a contestant on the next series of ITV's jungle-based reality show 'I'm A Celebrity - Get Me Out Of Here'. (Daily Star)

Middlesbrough striker David Nugent will be best man at Leicester striker Jamie Vardy's wedding on Wednesday. Foxes team-mate Danny Drinkwater has permission to go to the ceremony but must return for England training at 16:00 BST.(Leicester Mercury)