But Ibrahimovic's agent has cast doubt over his move to the club, saying where the Sweden forward ends up may be a surprise. (Expressen, via Daily Star)

Midfielder Yaya Toure, 33, will tell new boss Pep Guardiola he wants to stay at Manchester City after rejecting the chance to move to China to be the highest paid player in the world. (Manchester Evening News)

Arsenal fear Mesut Ozil is being targeted by Bayern Munich after contract talks with the 27-year-old midfielder were put on hold until the end of the summer. (Sun)

Liverpool have been told they will have to pay £45m for right-back Aleix Vidal, 26, as Barcelona see him as a replacement for Dani Alves, 33. (Mundo Deportivo, via Daily Express)

Arsenal's Hector Bellerin says he is "happy" to receive interest from other clubs, with the 21-year-old emerging as Barca's first choice should Alves join Juventus. (Daily Mirror)

Antonio Conte does not want to sell Willian, 27, to Manchester United but the Chelsea head coach is willing to let fellow Brazil international Oscar, 24, leave this summer. (Daily Mail)

Tottenham manager Mauricio Pochettino was photographed watching the Republic of Ireland draw with the Netherlands in Dublin - and he was sat next to Southampton striker Shane Long's agent. (Telegraph)

Didier Deschamps is to file a legal complaint against Eric Cantona after his former France team-mate suggested the squad selection for Euro 2016 may have been racially motivated. (Guardian)

West Ham are facing questions over their move to the Olympic Stadium, after it emerged that the club donated £12,500 to the Conservative Party. (Telegraph)

Swansea's Ashley Williams, 31, has admitted he is nervous about watching his Wales team-mate Gareth Bale, 26, play for Real Madrid in the Champions League final in case he gets injured. (Wales Online)

Stoke's Marko Arnautovic, 27, still rates Jose Mourinho as the best coach in the world, even though the new Manchester United manager only gave him three substitute appearances in their season together at Inter Milan. (Stoke Sentinel)

England captain Wayne Rooney tweeted his congratulations to fellow goal-scorer Marcus Rashford following their 2-1 friendly win over Australia. The 30-year-old said: "Great to be back playing with @England. Congratulations to @MarcusRashford scoring on his international debut."

The 18-year-old Manchester United forward himself then tweeted: "Big win and another goal!"

Former United defender Rio Ferdinand seemed to enjoy Rashford's goal-scoring debut for England. He posted a message about the teenager on his Facebook page. 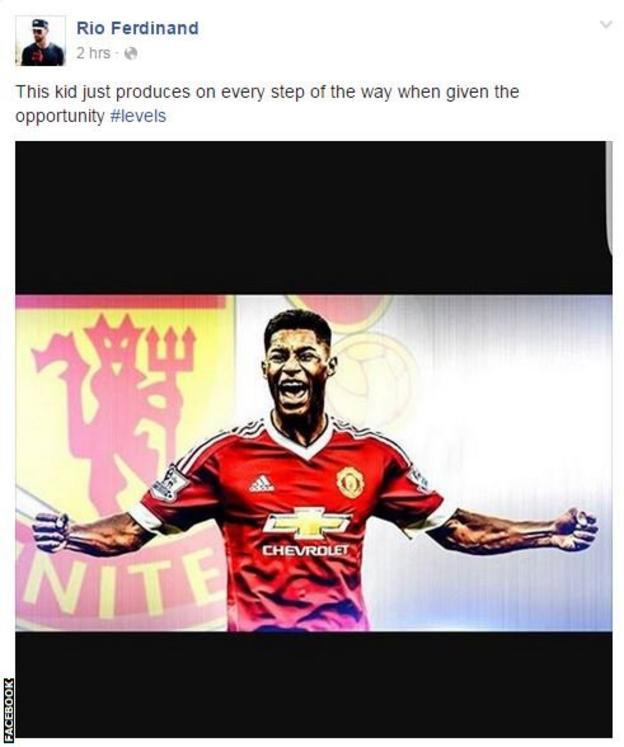 Manchester United's managerial saga has sent Twitter into a frenzy. Half a million tweets were sent following Jose Mourinho's appointment on Friday and six million have been posted about the story over the last two weeks. (Daily Mail)

Netherlands and Man Utd midfielder Memphis Depay ended up with his name spelt incorrectly on the team-sheet for his side's friendly with the Republic of Ireland on Friday. And Sky Sports made matters worse when they also spelt it wrong in their line-ups. (Sun)

Sheffield FC, who play in the Northern Premier League, have made an audacious bid for Manchester United target Zlatan Ibrahimovic. (Daily Star)