England's assistant manager Gary Neville believes Roy Hodgson should stay on as national team boss beyond the end of his current contract, which expires after Euro 2016. (Daily Telegraph)

Tottenham goalkeeper Hugo Lloris has rejected a new contract offer at White Hart Lane as the France international, 29, holds out for a better deal. (Daily Mirror)

Liverpool are closing in on a £4m move for Anderlecht's Belgium Under-21 midfielder Samuel Bastien, 19. (Daily Mail)

New Manchester United boss Jose Mourinho is pulling out of his first match in charge at Old Trafford as the manager of an England team for a Soccer Aid charity game on Sunday. (The Sun)

Rafa Benitez could add to his coaching staff at Newcastle United after losing number two Fabio Pecchia, who has become the new manager of Hellas Verona following their relegation from Italy's Serie A. (Newcastle Chronicle)

Manchester City are set to confirm Ilkay Gundogan, 25, as their first signing under new manager Pep Guardiola in a £21m move from Borussia Dortmund. (Daily Mail)

United and England forward Marcus Rashford, 18, has received backing from Pele ahead of Euro 2016, despite the Brazil legend never having seen him play.(Daily Express)

Jose Mourinho spent time on his first day at Old Trafford speaking to Port Vale chairman Norman Smurthwaite about who the League One club should appoint as manager.(Daily Mail)

Recently promoted Hull City will offer new contracts to Tom Huddlestone, 29, and Ahmed Elmohamady, 28, before their current deals expire next month, but 27-year-old forward Sone Aluko has been told he is free to leave the KC Stadium.(Hull Daily Mail)

Leicester City are close to making their first signings of the summer, with the arrival of Germany goalkeeper Ron-Robert Zieler, 27, and Spanish defender Luis Hernandez, 27. (Leicester Mercury) 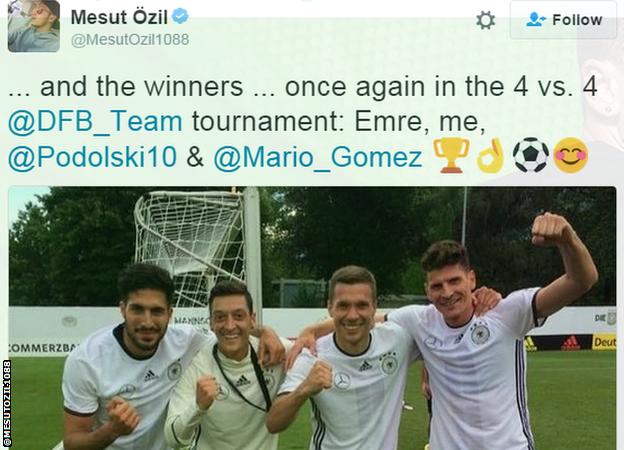 At least Arsenal midfielder Mesut Ozil has won something this season. But the Germany international will be hoping to celebrate a bigger prize than a 4v4 win in training at Euro 2016 later this month.

Juan Mata is not going to Euro 2016 and so has the summer off. According to this post from the Spaniard's Twitter account, it looks like the Manchester United midfielder is enjoying some classy motoring.

New Manchester United manager Jose Mourinho could be looking to move to a castle in North Wales. (Daily Post)

The terrace chant 'Will Grigg's on Fire', produced in homage to the Wigan and Northern Ireland striker, is threatening to enter the charts in the UK top 40. (Wigan Today)