But Manchester City have ended their interest in France international Pogba. (Guardian) 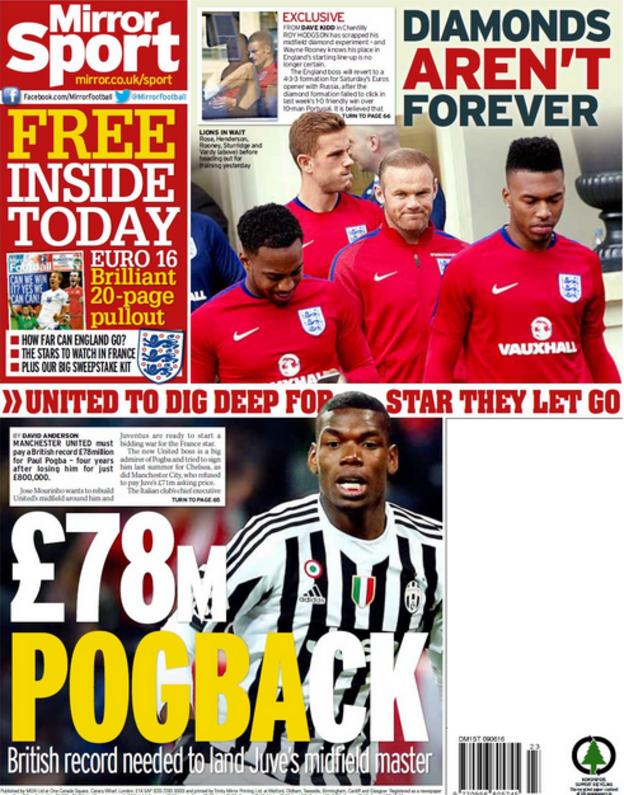 Liverpool could table a late bid to rival Arsenal's in the chase for Leicester striker Jamie Vardy, 29. (Daily Star)

Chelsea forward Diego Costa, 27, wants to return to Atletico Madrid this summer, according to the Spanish club's president. (Antena 3 Sports, via Metro)

Roma midfielder Radja Nainggolan, 28, has spoken to Conte about moving to Chelsea and says his Belgium team-mates Eden Hazard and Thibaut Courtois have urged him to move to Stamford Bridge. (Daily Telegraph)

Manchester City boss Pep Guardiola is not allowed to sign any players from Bayern Munich, according to the German champions' midfielder Douglas Costa, 25. (Globo Esporte, via Manchester Evening News) 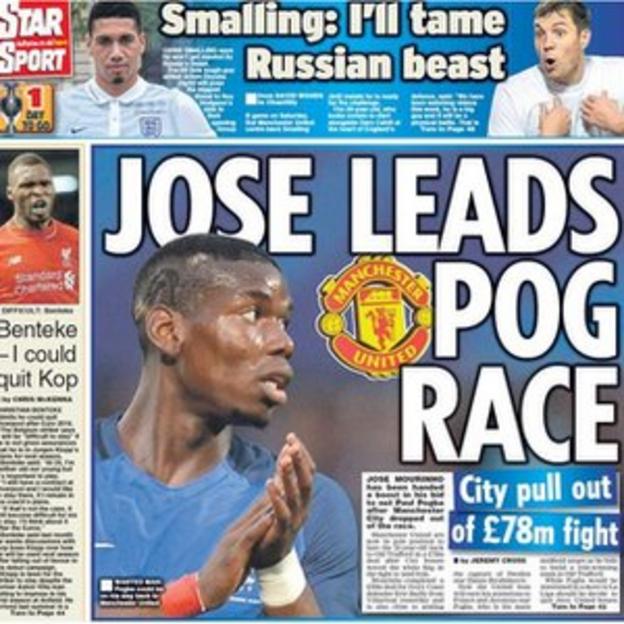 But United are willing to let Matteo Darmian leave, with Juventus favourites to sign the 26-year-old full-back. (Tuttosport, via Gazzetta dello Sport)

Southampton are braced for a Tottenham bid for 24-year-old midfielder Victor Wanyama, who has just one year remaining on his St Mary's deal. (Daily Mirror)

Arsenal forward Theo Walcott, 27, has no intention of leaving despite the Gunners bidding for Leicester's 29-year-old striker Jamie Vardy. (ESPN)

Stoke striker Peter Crouch, 35, says he may take up coaching when he finishes his playing career. (Daily Star)

Newcastle manager Rafael Benitez has made signing a striker his priority, but wants a proven goalscorer rather than a youngster with potential. (Newcastle Chronicle)

Championship side Wolves want to sign 20-year-old Manchester United forward James Wilson on loan for next season. (Express and Star)

Celtic plan to release Republic of Ireland striker Anthony Stokes on a free transfer, and the 27-year-old could join Rotherham. (Daily Mail)

Juventus are set to sign Roma playmaker Miralem Pjanic for £25m. The 26-year-old has been linked with Manchester United. (Gazzetta World)

Wednesday was National Best Friends Day, but Eric Dier was not feeling the love from Tottenham and England team-mate Dele Alli...

What's on Jose Mourinho's to-do list over the next few weeks? If you're blessed with superhuman vision you might be able to find a clue among the paperwork on his desk.

Former Tottenham striker Roberto Soldado, now at Villarreal, had a message for new Manchester United signing Eric Bailly. "I don't like red colour in England, but I wish you all the best my friend," he tweeted.

Manchester United winger Ashley Young appears to have dramatically aged - with the help of a Snapchat filter, that is...

Liverpool's players were reluctantly transformed into rap stars, with 'LL Cool A' (Adam Lallana) and 'C Bizzle' (Christian Benteke) among those to show off their skills on the mic before their pre-season tour of the United States. (Liverpool FC YouTube channel)

Leicester and England striker Jamie Vardy bought himself Shut the Box - a traditional pub board game - while he browsed the local shops near England's Euro 2016 base in Chantilly. (Daily Mail)

Chelsea and Belgium goalkeeper Thibaut Courtois' grandfather has revealed he is a nudist. (Derniere Heure)

Borussia Dortmund striker Pierre-Emerick Aubameyang - who has been linked with a move to Manchester City - has been filmed brushing up on his English slang. (YouTube)