Bournemouth's Eddie Howe, 38, has emerged as a contender to be next England manager, with Harry Redknapp, 69, in the frame as assistant. (Daily Mail)

Former Germany striker and current USA boss Jurgen Klinsmann is in talks with the Football Association for the England role. (Daily Star)

Real Madrid are ready to compete with Manchester United to sign Paul Pogba, 23, from Juventus for what could be a world record transfer fee. (La Gazzetta dello Sport)

But according to Spanish journalist Guillem Balague on BBC Radio 5 live, midfielder Pogba is heading to United.

Manchester City want to complete the signing of 20-year-old Schalke winger Leroy Sane swiftly now that the Germany international is out of Euro 2016. (Manchester Evening News)

The president of the Spanish football league is worried Barcelona forward Lionel Messi, 29, could leave to play in another country after being found guilty of tax fraud. (Daily Mail)

Arsenal have held talks over a move for Lyon's 25-year-old forward Alexandre Lacazette but are reluctant to pay an asking price of £42m. (Daily Mail)

The Gunners have rejected a £30m offer from Juventus for 27-year-old Chile striker Alexis Sanchez. (Tuttosport - in Italian)

West Ham have turned down the chance to sign Robin van Persie from Fenerbahce, even though the former Arsenal and Manchester United striker, 32, was willing to take a huge pay cut to join them. (Daily Mirror)

The Hammers have made a £25.7m bid to bring Colombian striker Carlos Bacca, 29, to the Premier League from AC Milan. (Sun)

Southampton are negotiating the £13m sale of Italian international striker Graziano Pelle to Chinese club Shandong Luneng, with his transfer expected to be completed early next week.(Daily Telegraph)

Borussia Dortmund have given Liverpool and Middlesbrough target Neven Subotic permission to talk to other clubs, with a fee of £4m expected for the 27-year-old defender. (Bild - in German)

Striker Vincent Janssen was allowed to miss training and cleared his AZ Alkmaar locker on Friday as he waits to complete an £18.8m move to Tottenham Hotspur. (Daily Telegraph)

Everton are favourites to sign Manchester United midfielder Juan Mata, 28, because Barcelona are not interested in signing the Spain international. (Sport.es via Liverpool Echo)

West Ham's Senegalese striker Diafra Sakho, 26, is a £15m target for West Brom and Sunderland - after missing the Hammers' pre-season tour of the USA. (Sun)

West Brom striker Saido Berahino, 22, has been offered a new contract worth £65,000 a week to stave off interest from Stoke. (Express and Star)

Arsenal and Germany midfielder Mesut Ozil posted a message on Twitter expressing his disappointment at his country's Euro 2016 semi-final defeat to France on Thursday...

....but France midfielder Paul Pogba had some consoling words for Ozil. 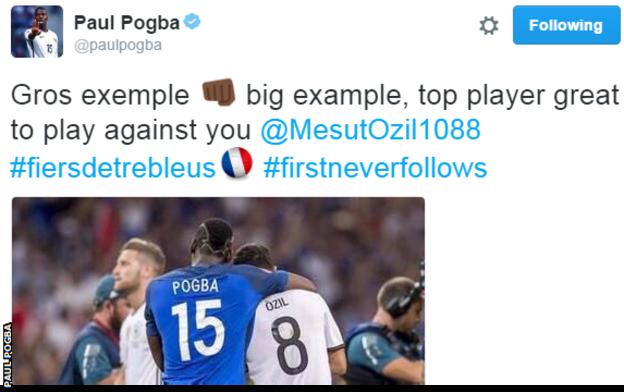 Liverpool striker Mario Balotelli has been making new friends by inviting some ducks into his home and feeding them - he posted a video of the encounter on Instagram...

The hills are alive with the sound of... Saido Berahino and his West Brom team-mates getting ready for the new season...

Liverpool striker Danny Ings celebrated his first outing in nine months following a knee injury by scoring the Reds' winner in a pre-season friendly at Tranmere.

The ball with which Argentina forward Lionel Messi missed a penalty for Argentina in the Copa America final is being sold by a fan because he is terrified of burglars breaking in to steal it. (Sun)