Sunderland boss Sam Allardyce is to be interviewed for the England manager's job this week. (Guardian)

Arsenal boss Arsene Wenger has indicated he would like to manage the England team. (Bein Sports, via Metro)

The Blues' players face a gruelling pre-season as new manager Antonio Conte has promised to make them work far harder than they have under his predecessors. (Times - subscription)

The wife of Inter Milan captain Mauro Icardi says the Italian side want to sell the 23-year-old this summer - although a move to either Arsenal or Chelsea looks highly unlikely. (Calciomercato via London Evening Standard)

Barcelona are willing to sell Turkey captain Arda Turan, 29, at two thirds of the 40m euros (£34m) they paid Atletico Madrid for him last summer. (Marca)

Swedish centre-back Joel Ekstrand, 27, is close to joining Leeds after being released by Watford.(Watford Observer)

Liverpool could receive up to £4.5m if they sell Spanish winger Sergi Canos, 19, to Norwich. (Liverpool Echo)

Portugal captain Cristiano Ronaldo's first-half departure on a stretcher during Sunday's Euro 2016 final drew numerous Twitter posts - many of them sympathetic, and led by his Real Madrid team-mate Gareth Bale.

Golfer Sergio Garcia was also quick to offer his sympathy as he tweeted: "So sad to see Cristiano get injured! Hope his left knee is not too bad."

"I'm so much for France but I'm so sad for Cristiano to see him go out of this," posted former Fulham, Manchester United and Everton striker Louis Saha.

Former European and Commonwealth 400m champion Iwan Thomas added: "Love or loathe him, that's sad to see when a top sportsman is injured on the big stage."

Darren Eadie, the retired ex-Norwich and Leicester midfielder, shared Thomas' view: "Self-belief often mistaken for arrogance. I have nothing but huge admiration for Ronaldo."

And Chelsea midfielder Nathaniel Chalobah added: "Love or hate Ronaldo, those tears just show how many emotions you can go through on a football pitch. Feel for the guy."

As Ronaldo sat distraught on the Stade de France turf, a moth landed on his face. Inevitably, the moth had numerous spoof Twitter accounts before the match had even reached half-time. 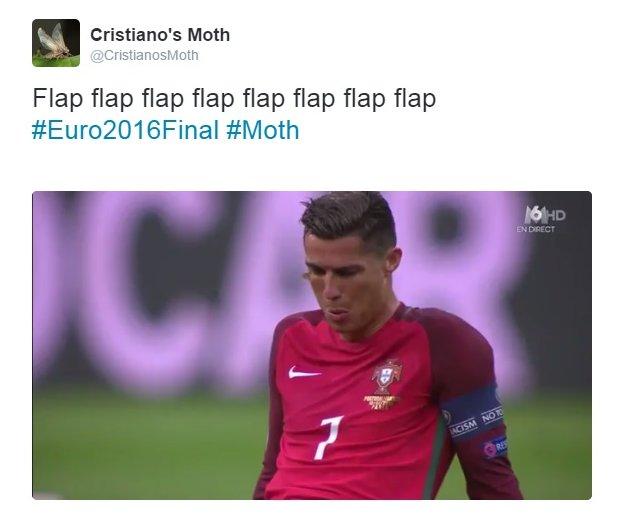 Richard Osman, co-host of BBC game show Pointless, managed to tie up Ronaldo's injury with the recent political turmoil in the UK. "Even Ronaldo's resigned," he tweeted after the forward's early exit from the final.

"My wife says the moths will go away if they turn the lights off," wrote journalist and broadcaster Martin Kelner.

Poet Ian McMillan, the Bard of Barnsley, added: "Ronaldo's Moth signs up for I'm A Celebrity Get Me Out Of Ear."

"I'm not saying this game is boring but the moth is now grateful it hasn't got eyes," posted comedian and actor Ricky Gervais, perhaps wondering if a David Brent-style dance might liven things up.

Canadian-Portuguese singer Nelly Furtado, who had a UK hit with I'm Like A Bird in 2001, could follow up with I'm Like A Moth if her rather poetic tweet about Ronaldo's injury is anything to go by. She wrote: "In absence of moonlight, a moth moves to the next best thing: man-made light. Ronaldo dares to be great and cares about something. Try it."

Manchester City midfielder Ilkay Gundogan - forced to miss Euro 2016 with a knee injury - believes his Germany team-mates should have been in Sunday's final, tweeting: "Still hard to believe but the tournament's best team will not take part in the final."

Former Liverpool defender Jamie Carragher offered some gossip on the identity of England's next manager, posting: "Just got to my seat for the Euro 2016 final and I'm sat next to the Iceland assistant coach. He doesn't want the England job."

Plenty of footballers were happy to pay tribute to Andy Murray after he won the Wimbledon men's singles title for a second time on Sunday. Tottenham and England forward Harry Kane wrote: "Congratulations, Andy Murray! Such a great performance against a tough opponent! Fully deserved!"

In other football news, an Inverness Caledonian Thistle fan not only took his dog to Sunday's pre-season friendly at Highland League side Clachnacuddin, but also made sure the animal was decked out in a replica shirt... 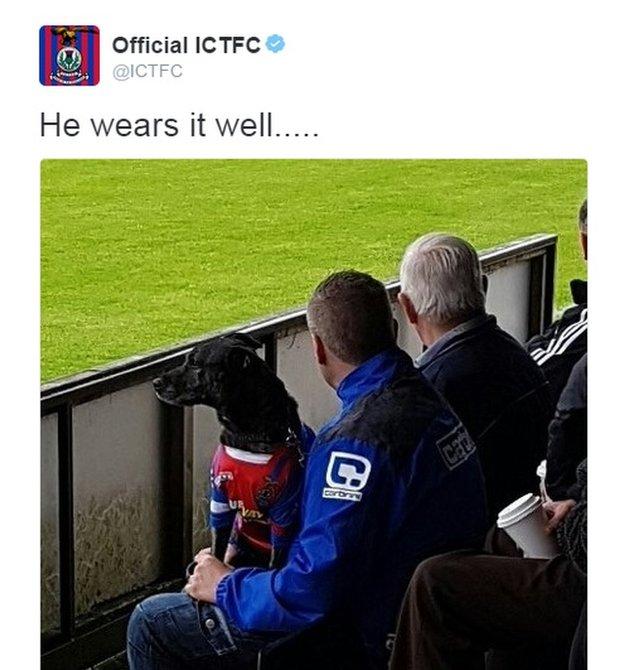 Millwall forward Lee Gregory responded cryptically to reports he has handed in a transfer request so he can return to his native south Yorkshire to join Rotherham.

New Manchester United striker Zlatan Ibrahmovic has been told he can never be called the King of Old Trafford - because club favourite Eric Cantona says that title belongs to him. (Eurosport)