Chelsea are planning to add to the signing of Leicester and France midfielder N'Golo Kante, 25, by going back to the Foxes to try to sign 25-year-old Algeria winger Riyad Mahrez. (Sunday Express)

Leicester City could also lose head of recruitment and assistant manager Steve Walsh as Everton want to bring him in as sporting director. (Sunday Telegraph)

Manchester United defender Marcos Rojo, 26, is wanted on loan by La Liga side Villarreal if the Argentine can fit into the club's wage structure.(Mail on Sunday)

Red Devils midfielder Jesse Lingard, 23, is in talks over a new £40,000-a-week deal with the club. (Sunday Mirror)

New United boss Jose Mourinho wants to sign Monaco and Brazil right-back Fabinho, 22, in a deal which could be worth £22m. (Sun on Sunday)

Defender Laurent Koscielny, 30, and Arsenal have stalled in their talks over a new £90,000-a-week contract, with Bayern Munich interested in the France international. (Sunday Express)

Liverpool boss Jurgen Klopp has defensive concerns and the Reds have contacted Barcelona about centre-back Jeremy Mathieu, 32. (Le Parisien via Sun on Sunday)

West Ham striker Diafra Sakho, 26, has refused to travel with the team to their Austria training camp as the Senegal player looks to push through a move away. (Mail on Sunday)

Liverpool are looking to keep full-back Jon Flanagan, 23, despite the player being linked with a loan move to Brendan Rodgers' Celtic. (Liverpool Echo)

Southampton and Serbia midfielder Dusan Tadic, 27, is wanted by Bundesliga side Schalke if their Germany forward Leroy Sane, 20, completes a £42m move to Manchester City. (Mail on Sunday)

West Brom owner Jeremy Peace is close to selling the club to Chinese investors in a £150m deal which could be completed in the next two weeks. (Sunday People)

Serie A side Roma want £37.6m for Greece defender Kostas Manolas, 25, who has been linked with Premier League sides Arsenal, Chelsea and Manchester United. (Goal.com)

New Chelsea manager Antonio Conte says he provides "education and respect to all people" but warned "if I don't have this, you are asking for trouble, for a problem". (Sunday Telegraph)

Blackburn manager Owen Coyle says he is waiting on answers for loan moves on "one or two" Premier League players.(Lancashire Telegraph)

Manchester United full-back Luke Shaw was pleased to get back on the pitch after 10 months out with a broken leg.

New Manchester United manager Jose Mourinho enjoyed some Portuguese cakes after taking charge of the Red Devils for the first time against Wigan on Saturday. 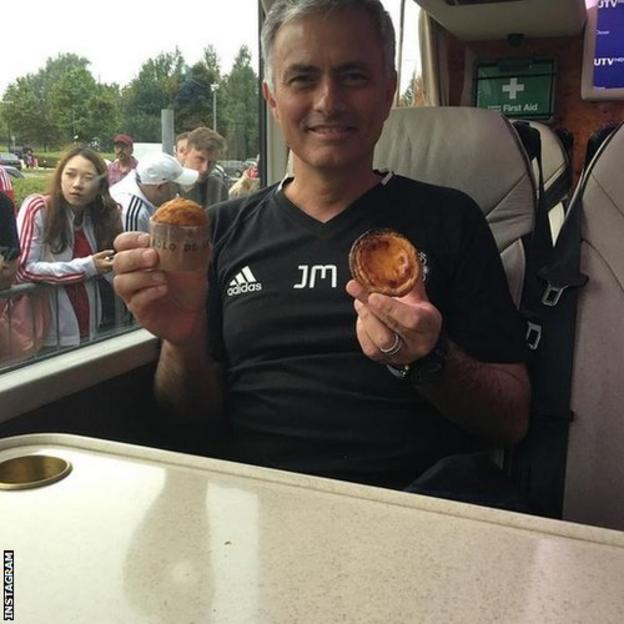 Former Sunderland manager Mick McCarthy feels Sam Allardyce is the right man for the England job... because he is just like new Prime Minister Theresa May. (Chronicle)