Russia should be banned from this summer's Olympics and Paralympics after evidence was found of a four-year, state-sponsored doping programme, says the World Anti-Doping Agency.

A Wada-commissioned report found urine samples of Russian competitors were manipulated across the "vast majority" of summer and winter Olympic sports from late 2011 to August 2015.

The International Olympic Committee (IOC) will decide on Tuesday whether to provisionally ban Russia from the Rio Olympics, which start on 5 August.

He said the findings of the report are a "shocking and unprecedented attack on the integrity of sport and on the Olympic Games".

Richard McLaren led the independent commission that looked into allegations of state-sponsored doping in Russia.

He said his investigative team had found that 580 positive tests were covered up across 30 different sports in the build-up to the 2012 Olympic in London 2012 and during the 2014 Winter Olympics in the Russian city of Sochi.

McLaren added he had "only skimmed the surface" in his 57-day investigation.

Now Wada wants the Canadian law professor to "complete his mandate" by identifying athletes who benefited from the programme.

Wada president Sir Craig Reedie described the "scope and scale" of the findings as a "real horror story".

Russia's track and field athletes are already barred from competing at the 2016 Olympics in Rio after the body that governs world athletics, the International Association of Athletics Federations, voted in June to maintain a global competition ban on the All-Russia Athletic Federation (Araf).

Araf hopes to overturn the suspension and will find out by Thursday if its appeal to the Court of Arbitration for Sport has been successful. 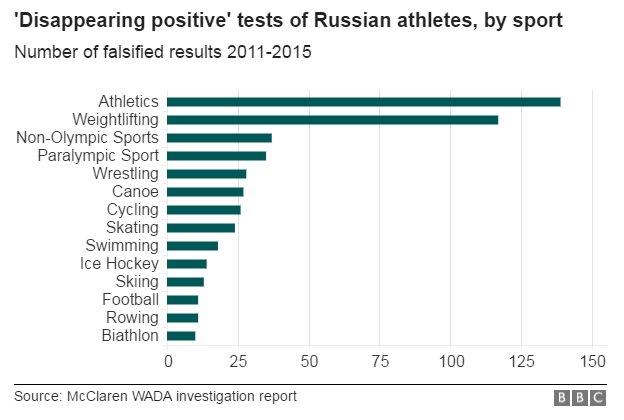 Why was the report commissioned?

The commission was set up to look into claims by Grigory Rodchenkov, the former head of Russia's national anti-doping laboratory, that he doped dozens of athletes, including at least 15 medallists, in the build-up to Sochi.

He claims this was the result of an elaborate and orchestrated plot with the Russian government, which exploited its host status to subvert the drug-testing programme. The country's government has repeatedly denied the claims.

Rodchenkov, now in hiding in the United States, also alleges he doped athletes before the 2012 Olympics in London, the 2013 World Athletics Championships in Moscow and the 2015 World Swimming Championships in Kazan.

What did the report say?

Russia's sports ministry made sure positive urine samples disappeared from late 2011 to 2015 to improve the country's international sporting performance.

It was supported by the country's security service (FSB), the Russian Anti-Doping Agency (Rusada) and the Center of Sports Preparation of National Teams of Russia (CSP),

When this was not enough to hide doping - such as at an international event like Sochi 2014 - positive urine samples were switched with clean ones from a freezer through a "mouse hole", with FSB agents on hand in the Sochi laboratory disguised as maintenance workers.

The claims in detail: 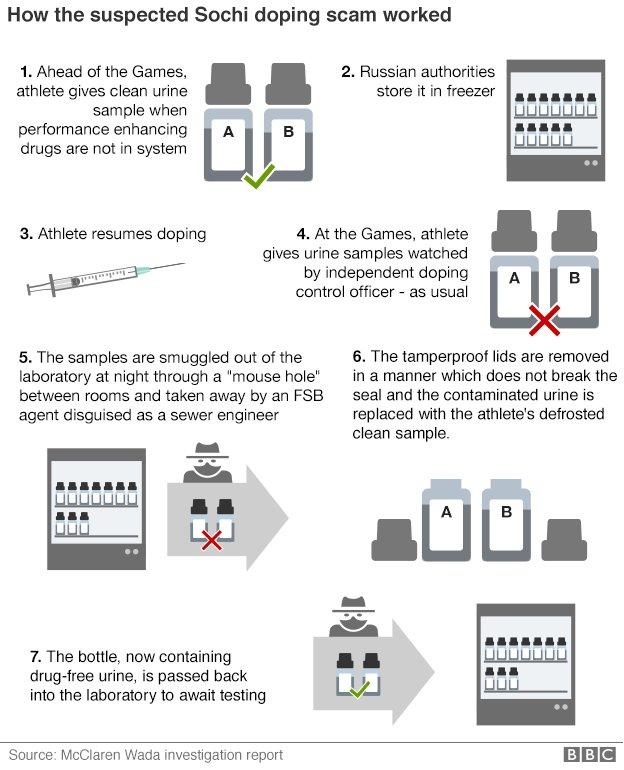 How has Russia reacted?

The Tass news agency subsequently reported that deputy sports minister Yuri Nagornykh had been relieved of his responsibilities.

According to McLaren's report, Nagornykh knew of "every positive analytical finding" and decided which athletes to protect.

However, Putin said whistleblower Rodchenkov was "a person with a scandalous reputation".

The Russian Olympic Committee has also called for a fuller investigation into the allegations in McLaren's report and has pledged to provide full assistance.

"This is a watershed moment in sport's long fight against drugs cheats - and arguably the gravest crisis in the history of the IOC.

"IOC president Thomas Bach - a friend of Russian president Vladimir Putin - is in a very difficult position. Sport relies on Russia to host many of its global events. It will stage football's World Cup in 2018. But now its status as a sporting superpower, along with its participation in Rio, hangs by a thread.

"Bach previously made clear how reluctant he is to ban the entire Russian team from Rio, but this report was worse than many had expected. The sense is that such is the pressure from the likes of Wada, he may feel he now has no choice but to take this unprecedented step, just weeks before the Rio Games.

"The IOC and Wada face serious questions, too. How could all this have gone on in a Wada-accredited lab? Why did it take a whistleblower to unearth the corruption? And will this scandal split the Olympic movement beyond repair?"

"Our position has been clear for months. In the event that the report showed the state involvement in corrupting the Olympic Games and running a doping programme, they have no business being around the Olympics."

"I think that a level of institutionalised doping, of institutionalised cheating and fraud to sport, which has done such damage to every sport globally, has to be punished strongly. The IOC has to stand up for the rights of the clean athletes who want to perform at an Olympic Games on a fair and level playing field."

"The IOC needs to make a statement that says this isn't all right and this can't happen again. The only way to do that is by banning Russia. A statement that used to bug me was: 'You're just a drug cheat like other athletes'. But I don't get angry now because I can understand why people think that."

"What we will hear, no doubt, on Tuesday is this question of individual punishment set against collective responsibility. Is it right that clean Russian athletes should be barred because of the actions of their state? It will be fascinating which side of that line the IOC falls."