Juventus midfielder Paul Pogba's world record £100m move to Manchester United is being held up by a row over who pays the 23-year-old France international's agent a £25m fee. (Sun)

Juventus could replace Pogba with Barcelona's 32-year-old Argentina international Javier Mascherano, who can play in defence and midfield. (Corriere dello Sport - in Italian)

Manchester United are ready to rival Manchester City for the signing of Juventus defender Leonardo Bonucci and are willing to pay £50m for the 29-year-old Italy international. (Manchester Evening News)

Liverpool could bring in more than £100m in transfer fees this summer, with £30m-rated Belgium striker Christian Benteke, 25, among those expected to leave. (Daily Mail)

Manchester City believe they would be Lionel Messi's first choice if he left Barcelona - and a former president of the Spanish giants has claimed there is a "conspiracy" to get rid of the 29-year-old former Argentina forward. (Catalunya Radio, via Manchester Evening News)

The agent of Kalidou Koulibaly, 25, says the Senegal defender - who interests Chelsea and Everton - intends to leave Serie A side Napoli this summer. (Radio CRC, via Talksport)

Liverpool and Borussia Dortmund have both made offers to 26-year-old Newcastle and France midfielder Moussa Sissoko. (Le 10 Sport, via Daily Star)

Algeria international Mahrez is "not bothered" about speculation linking him with a move to Arsenal, according to team-mate Demarai Gray, 20. (Independent)

Palmeiras' Brazilian forward Gabriel Jesus, 19, who has a minimum fee release clause of £20m, is a target for both Manchester United and Manchester City. (UOL Esporte, via Sun)

Hull City have a five-man shortlist topped by former Everton boss Roberto Martinez as they seek a successor to Steve Bruce. (Guardian)

Former Tigers boss Bruce could quit football after leaving the club to spend more time with his wife at their property in Portugal. (Daily Star)

Former Tottenham midfielder Rafael van der Vaart, 33, has been linked with a move to Championship side Reading after being told he has no future at Spanish club Real Betis. (Daily Mirror)

Argentina forward Carlos Tevez, 32, says both Chelsea and Napoli want to bring him back to Europe, but he wants to stay with Boca Juniors. (Gazzetta dello Sport)

Winger Ryan Kent, 19, is the first of a host of youngsters Liverpool manager Jurgen Klopp intends to send out on loan next season. (Liverpool Echo)

Tottenham forward Harry Kane found a unique way of breaking his baby news to the world, posting this picture with a tweet that said: "So happy that @KateGoodlandx and I are expecting our first child! Exciting times ahead! Can't wait!" 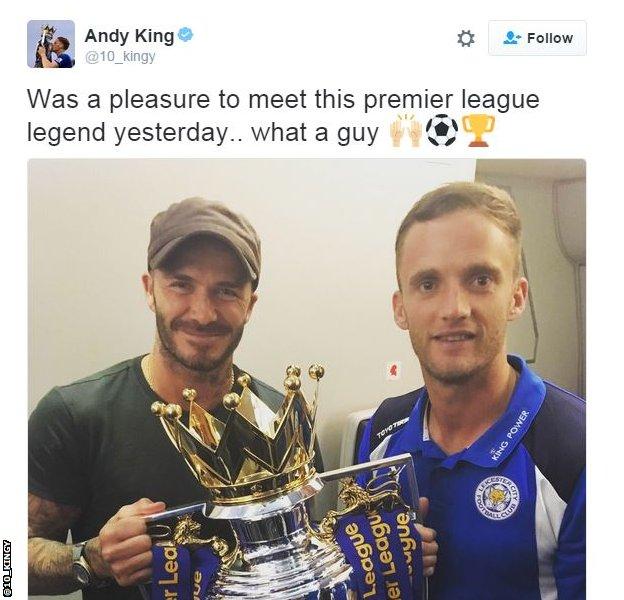 Foxes defender Danny Simpson also enjoyed the chance to meet the former England captain, tweeting: "Absolute pleasure to meet this legend and hold the trophy with him #DavidBeckham"

Following a meeting with his agent Mino Raiola in Miami, Paul Pogba posted this picture on Instagram with the caption "we say it all by saying nothing at all". 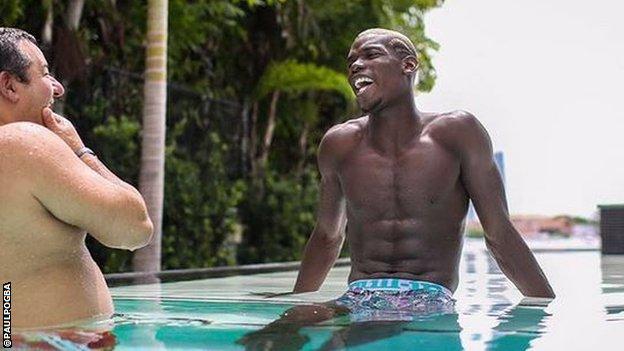 Manchester United's Daley Blind had a message for fans after the club's pre-season friendly against Manchester City was called off. The Netherlands international wrote on Instagram: "It's time to go back to Manchester, unfortunately the last game was cancelled but thanks for all your support in China."

But he got messages of support from his fellows professionals, with team-mate Andy Carroll saying "Stay Strong!! #Gutted." Norwich City's Matt Jarvis added: "I hear you. You'll be back flying in no time at all!"

Chelsea players struggled with some USA-themed questions when their knowledge was put to the test before the club's pre-season tour. (Metro)