Arsenal will make an improved £35m bid for Lyon striker Alexandre Lacazette, 25, after having an initial £29.3m offer rejected by the French club. (Daily Telegraph)

The Gunners are interested in signing Torino full-back Bruno Peres, 26, with the club wanting £16.9m for the player. (Gazzetta World)

Arsene Wenger's side are in talks to sign Valencia's German defender Shkodran Mustafi, 24, who has a £42.1m release clause in his contract. (Sky Sports)

Chelsea have had a £57m bid for their former striker Romelu Lukaku, 23, rejected by Everton, with the Toffees holding out for £75m. (Daily Mirror)

Tottenham midfielder Christian Eriksen, 24, has turned down a new contract as he wants a significant rise on his current £30,000-a-week deal. (Evening Standard)

Swansea have made an offer for Sevilla striker Fernando Llorente, 31, after Bafetimbi Gomis joined Marseille on a season-long loan to leave the Swans without a recognised striker. (Daily Mail)

Leicester City are ready to offer a new £100,000-a-week contract to playmaker Riyad Mahrez, 25, who is believed to be a target for Arsenal. (Daily Express)

Aston Villa are likely to sell Senegal international Idrissa Gana, 26, to Everton in a £7.1m deal this weekend. (Daily Mirror)

Manchester United defender Cameron Borthwick-Jackson, 19, could leave the club on loan after having discussions about his future at Old Trafford. (Manchester Evening News)

Paul Pogba's transfer to Manchester United and John Stones' move to Manchester City are both "only a matter of time" before they happen, says Times journalist Rory Smith. (5 live in short)

Everton have not made a bid for Sunderland defender Lamine Kone, 27, despite reports suggesting a £14m offer has been made. (Sunderland Echo)

The Toffees are interested in signing Swansea defender Ashley Williams, 31, who could cost up to £10m. (Daily Mirror)

Manchester City are reluctant to meet Everton's £50m valuation of defender John Stones, 22, with their preferred price being around £40m. (Guardian)

City goalkeeper Angus Gunn, 20, who made three penalty saves in a pre-season friendly against Borussia Dortmund, wants to stay at the club and fight for his place under new boss Pep Guardiola. (Manchester Evening News)

West Brom striker Saido Berahino, 22, is willing to stay at the club until his contract runs out next summer and leave on a free transfer to join a club in Europe. (ESPN)

Newcastle have had an approach rejected by Championship rivals Brighton for winger Anthony Knockaert, 24, who could cost up to £10m. (Chronicle)

Manchester City will confirm Argentina international Sergio Aguero, 28, has signed a new contract before the start of the season. (Daily Mail)

It's a game of cat and mouse to announce Paul Pogba's move to Manchester United from Juventus, according to the player's agent, who said on Twitter:

Leicester midfielder Andy King signed his new contract in picturesque surroundings and said on Instagram: "Everyone knows how much I love playing for this team and the journey we've been on has been unbelievable." 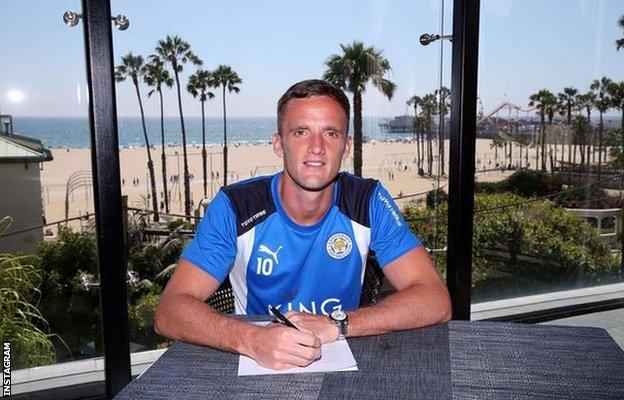 A fan of Barcelona star Neymar was arrested after being discovered in the laundry room of the Brazil national team's hotel in Rio de Janeiro. (ESPN)