Chelsea are preparing a £68m bid to buy back striker Romelu Lukaku - even though Everton do not want to sell the 23-year-old. (Daily Mirror)

Manchester United forward Wayne Rooney, 30, will continue to be available for England even if manager Sam Allardyce does not retain him as captain. (Daily Mail)

Leicester striker Jamie Vardy, 29, says that his life is "carnage" and that he rarely leaves his house because of the attention he gets after helping his club win the Premier League last season. (Daily Telegraph)

Manchester United are inching closer to completing a world-record deal for Juventus midfielder Paul Pogba, 23, in the region of £100m. (Sky Sports)

Hull City are poised to make a decision on their new manager in the next 24 hours, with Wales boss Chris Coleman believed to be one of the newly promoted club's top targets.(Daily Mail)

West Ham's deal for the Olympic Stadium could make the club's owners richer than was previously thought. (City AM)

Premier League clubs with money to spend thanks to a new television contract are being overcharged significantly for players by their European rivals. (Daily Mirror)

Jose Mourinho was desperate to sign Swiss forward Breel Embolo, 19, from Basel - according to Schalke sporting director Christian Heidel, who signed him instead. (Manchester Evening News)

Mourinho and his new forward signing Zlatan Ibrahimovic, 34, will make Manchester United successful again, according to retired striker Hernan Crespo, who played for the manager at Chelsea and Inter Milan. (Guardian)

New Chelsea manager Antonio Conte says he is losing his voice because he shouts at his players so much. (Times - subscription required)

League One side Walsall are set to break their transfer record by paying £300,000 to Cypriot top-flight side Anorthosis Famagusta for forward Andreas Makris, 20. (Express and Star, Wolverhampton)

Manchester United captain Wayne Rooney organised a picture of his three sons as he gets ready for his testimonial match against Everton on Wednesday.

Liverpool striker Mario Balotelli, who has been left out of the club's United States tour party, posted a photo on Sunday of himself enjoying the last of the July sunshine. One tweeter responded: "Join Tranmere." 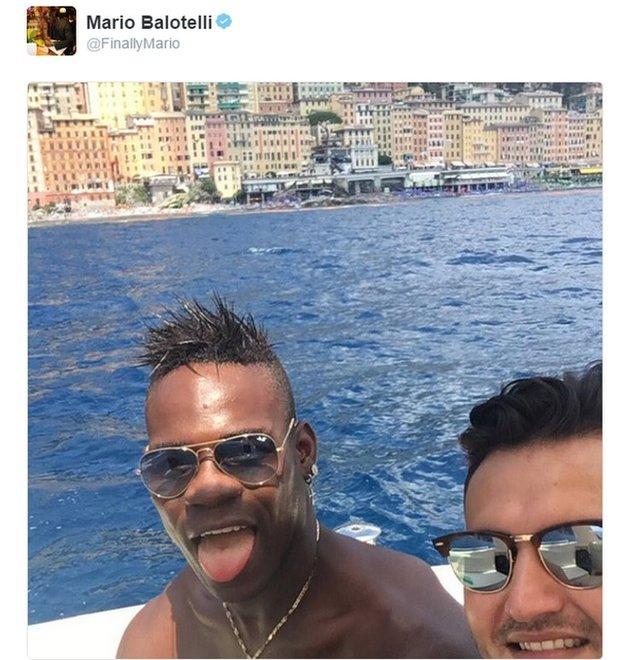 Inspirational quote of the day came from Watford striker Odion Ighalo: "Comparison will steal your joy, stop that habit and run your race," he tweeted. True, but it might get you cheaper car insurance.

"I really can't believe this was 10 years ago," tweeted Michael Carrick, marking the anniversary of his move to Manchester United from Tottenham. "I remember the feeling like it was just yesterday."

Professional footballers across England are eager to get the season started, among them Newcastle striker Dwight Gayle, who posted on Instagram: "Nice to finish pre-season with a win at St James' Park [over Vitesse Arnhem]. Looking forward to next week. #howaythetoon."

League One side Oxford United held their family fun day on Sunday - and striker Wes Thomas was particularly brave as he got to grips with a snake that was, appropriately, the colour of the club's strip.

Ryan Giggs once held a young Cristiano Ronaldo up against the wall when they were team-mates at Manchester United - because he felt the Portuguese winger's breakfast soft drink was too unhealthy. (Daily Mirror)

New United forward Zlatan Ibrahimovic, 34, left his hotel in Manchester just a few hours after arriving in England, because it did not have a swimming pool. (Sun)