United boss Jose Mourinho refused to comment on their reported pursuit of Pogba but revealed: "The reality is we are going to sign one more player." (Talksport)

A £100m world record deal for Pogba could be confirmed before Sunday's Community Shield against Leicester at Wembley. (Daily Telegraph)

Pogba is expected in Manchester by the weekend to complete the move, which could be worth as much as £112m, earning the France international around £275,000 per week. (Daily Express)

Arsenal are likely to have to pay more than £50m for Wolfburg's Germany international winger Julian Draxler, 22. (Daily Star)

However, Wolfsburg have released a statement claiming that they will not sell Draxler this summer. (Metro)

Belgium forward Benteke is prepared to leave Liverpool on loan in order to kick-start his stalled career. (Daily Mail)

The success of West Ham's £26m move for AC Milan striker Carlos Bacca, 29, may depend on whether the Hammers qualify for the Europa League. (Daily Mirror)

West Ham have opened talks with Aston Villa over a £8m move for striker Jordan Ayew, in the hope that buying the 24-year-old will help their pursuit of older brother Andre from Swansea. (Sun)

New boss Antonio Conte has dropped his biggest hint yet that Chelsea are on the verge of a club record deal for Everton striker Romelu Lukaku, 23, and says fellow striker Diego Costa, 27, will remain at Stamford Bridge. (London Evening Standard)

Arsenal boss Arsene Wenger has been told that he can have whatever transfer funds it takes to secure his main targets - Lyon striker Alexandre Lacazette, 25, and Valencia defender Shkodran Mustafi, 24. (Times - subscription required)

Manchester City are set for their fifth big-money signing of the summer after agreeing terms with Colombian side Atletico Nacional for the £15m signing of 19-year-old striker Marlos Moreno. (Daily Star)

Manchester United defender Marcos Rojo has turned down the chance to join Sven-Goran Eriksson's Shanghai SIPG. The Argentina defender, 26, has been made available for £10m. (Daily Record)

Swansea chairman Huw Jenkins admits frustrations with the transfer market but says the club "fully expect to make one or two additions in the next few days." (South Wales Evening Post)

The Swans have agreed a £5m fee for Sevilla striker Fernando Llorente and are in contract talks with the 31-year-old. (Daily Star)

Newcastle manager Rafa Benitez has suggested he will "move on" from Brighton's Anthony Knockaert, 24, after being rebuffed in a move for the French winger. (Argus)

West Ham boss Slaven Bilic says the club were looking for a new left-back even before Aaron Cresswell was ruled out for four months with a knee injury. Sweden Under-21 international Ludwig Augustinsson, 22, who plays for Copenhagen, and ex-Newcastle defender Davide Santon, 25, - now out of favour at Inter Milan - are possible targets. (Romford Recorder)

Stoke are close to signing 19-year-old AFC Wimbledon defender Ryan Sweeney after reportedly agreeing a fee of £250,000 for the Republic of Ireland Under-18 international. (Stoke Sentinel)

Burnley striker Sam Vokes, 26, has urged his international boss Chris Coleman to reject a move to Hull and stay with Wales - who have refused the Tigers permission to speak for him. (Lancashire Telegraph)

QPR have been given approval by London Mayor Sadiq Khan to build 605 new homes adjacent to the site where their proposed new ground will stand at Old Oak, north of Wormwood Scrubs. (GetWestLondon)

Champions League group games could be staged in the Far East, United States and Africa as Italian and Spanish clubs want to increase their fanbase in expanding markets.(Daily Mail)

Could this be a hint from Chelsea midfielder Oscar as to his future, having been linked with a move away from Stamford Bridge?

As the Rio Olympics draws ever closer, Tottenham's summer signing Victor Wanyama backs his 89 Kenya compatriots who will be competing at the Games.

West Ham goalkeeper Adrian gets acquainted with the club's new ground at the Olympic Stadium in Stratford, where they will play their first competitive home match on Thursday against Slovenia's NK Domzale in the Europa League. 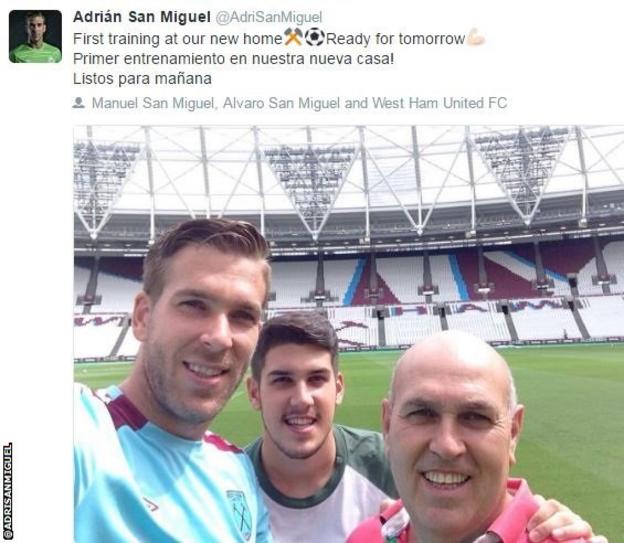 Hull defender Curtis Davies reveals a podcast in collaboration with comedian Romesh Ranganathan entitled "HipHop Saved My Life", and writes on Instagram: "It's not just for hip hop fans Romesh is hilarious as always."

Manchester United fans wasted no time in correcting winger Jesse Lingard for tweeting congratulations to Wayne Rooney for "celebrating 10 years with Man Utd" at his testimonial when it is, in fact, 12 years since he joined from Everton. (Metro)