Manager Pep Guardiola has suggested Joe Hart's career at Manchester City could be in the balance, but says the 29-year-old England goalkeeper's future will be decided "inside the doors" of the club. (Guardian)

Denmark winger Christian Eriksen, 24, is in a stalemate with Tottenham after asking for a new contract worth £150,000 a week. (Daily Mirror)

Juventus and Inter Milan are both interested in Eriksen. (Daily Telegraph)

Tottenham are prepared to bid £13m for Sporting Lisbon and Portugal midfielder Adrien Silva, 27, who is also wanted by Everton. (L'Equipe - in French)

Spurs striker Harry Kane, 23, says he "still can't put my finger on what went wrong" at Euro 2016 but adds he is "probably feeling as good going into a season as ever." (Sun)

Arsenal manager Arsene Wenger says midfielders Mesut Ozil and Alexis Sanchez, both 27, are no closer to signing new contracts but he is not worried about their futures. (Evening Standard)

Wenger has chosen Santi Cazorla as his new club captain for the 2016-17 season.(Daily Star)

The Arsenal boss believes that the first £200m footballer is just around the corner but is adamant the Gunners can still compete with Europe's elite despite the astronomical spending of his rivals.(Daily Mail)

Everton are closing in on a deal for Valencia and Tunisia defender Aymen Abdennour, 27. (Deporte Valenciano, via HITC)

Former England Under-21 striker Saido Berahino, 23, has told West Brom he intends to see out the final year of his contract, despite interest from Crystal Palace and Stoke. (Daily Mail)

Berahino will not be allowed to leave West Brom unless manager Tony Pulis can find a suitable replacement.(Daily Mirror)

Liverpool and Italy striker Mario Balotelli, 26, will not join Serie A side Pescara this summer, according to the club's president Daniele Sebastiani. (Gazzetta World)

Liverpool striker Daniel Sturridge, who was told by manager Jurgen Klopp last season that he must learn "what is serious pain and what is only pain", says he has "played with many injuries, many a tear, many a bruise."(Times - subscription required)

Southampton defender Jose Fonte, 32, has described Manchester United as "one of the biggest clubs in the world" and says he is flattered to be linked with them. (Mais Futebol, via ESPN)

Everton manager Ronald Koeman says the speed of the Toffees' transfer activity has been "frustrating" and he still hopes to sign up to four new players. (Liverpool Echo)

Bologna midfielder Amadou Diawara, 19, will reject a £14.7m move to Championship side Aston Villa as he wants to sign for Roma instead. (Deporte Valenciano - in Spanish)

Former Sweden striker Zlatan Ibrahimovic, 34, says he could stay at Manchester United and carry on playing for another three seasons. (Sky Sports)

Tottenham midfielder Dele Alli, 20, will just have 'Dele' on the back of his shirt this season - making the change for personal reasons. (Tottenham website)

Patrice Evra has been emptying former Juventus team-mate Paul Pogba's locker after his move to Manchester United. He posted a picture on Instagram with the caption: "You should have at least emptied your locker... I hope you are not expecting me to bring you your stuff to Manchester." 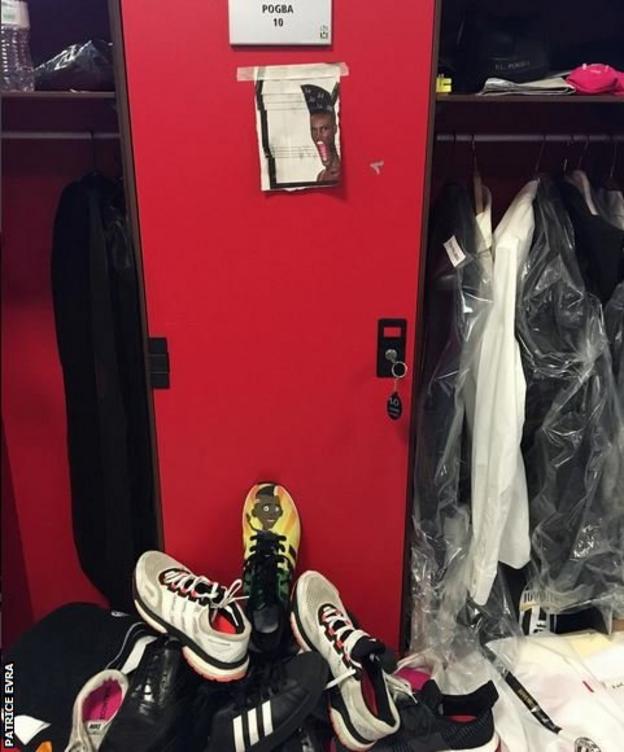 Chelsea midfielder John Mikel Obi has welcomed Pogba back to the Premier League with a video of him nutmegging the France international...

Even Premier League champions have to do their own washing. Leicester goalkeeper Kasper Schmeichel tweeted a picture of his preparations for the new season. He wrote: "Gloves drying, ready for tomorrow. Can't wait for the new Premier League season to begin."

Stoke and England goalkeeper Jack Butland will miss the Premier League opener against Middlesbrough after injuring an ankle in training. Butland, who was ruled out of Euro 2016 after fracturing his ankle on England duty in March, tweeted: "Horrific timing after feeling so strong and sharp in pre-season, waiting on the scan results, fingers crossed just a minor setback!"

Liverpool fan Katarina Johnson-Thompson got a shout-out from the club after she set a new British high jump record in the women's heptathlon in Rio.

Former Manchester United manager Sir Alex Ferguson once wrote to Burnley's new midfielder Steven Defour - after he was injured in 2009.

A Leicester fan who won £20,000 after the Foxes won the title at odds of 5,000-1 has backed Claudio Ranieri's men to win the league, FA Cup and Champions League. The odds he has been given? 5,000-1.(Leicester Mercury)

Pep Guardiola has been improving his English by watching BBC Breakfast before training. (Sun)