Southampton have offered Fonte a new contract that would put him among their top earners. (Daily Telegraph)

Everton and Sevilla are interested in Hart, whose contract runs until 2019. (Sky Sports)

Midfielder Cesc Fabregas, 29, will fight for his Chelsea future - despite being left out in favour of new signing N'Golo Kante, 25, by new boss Antonio Conte. (Sun)

Leicester want to keep Ghana left-back Jeffrey Schlupp, and have rejected two bids for the 23-year-old from West Brom. (Guardian)

Manchester United captain Wayne Rooney, 30, will not be offered a contract extension for at least 18 months. The England striker's contract runs until the summer of 2019 but he must now prove he is worth an increase on his £300,000-a-week wages. (Sun)

Everton and Inter Milan want Newcastle attacking midfielder Moussa Sissoko but the 27-year-old would like to join Real Madrid.(L'Equipe - in French)

Liverpool want a straight £30m for Christian Benteke. They rejected a £30m deal from Crystal Palace because the fee came with add-ons, including Alan Pardew's side qualifying for the Champions League. (Daily Telegraph)

Pardew is facing mounting discontent from a number of players over the handling of his decision to strip Mile Jedinak of the club captaincy and install Scott Dann in the role. (Times - subscription required)

Algeria winger Riyad Mahrez, 25, would only be tempted leave Leicester for "two or three clubs".(France Football via ESPN )

The Hammers have been unable to increase their capacity to 60,000 for their first home Premier League game at their new stadium against Bournemouth on Saturday. Newham Council has limited the attendance to 57,000 - after too many home fans stood for long spells during the first two matches in the all-seater stadium. (Daily Mail)

Barcelona are close to agreeing a deal with Valencia for 22-year-old Spain striker Paco Alcacer. (Sport - in Spanish)

Former Liverpool striker Fernando Torres believes he was portrayed as a "traitor" following his controversial departure to Chelsea five years ago and says the team has not progressed since he left. (Liverpool Echo)

A fundraising dinner at Wembley last month to celebrate the 50th anniversary of England's World Cup victory resulted in a financial loss of £220,000. (Times - subscription required)

Uefa is considering changing the format of the Champions League so the top four teams from the top four European leagues would qualify automatically. (Sky Sports)

When Burnley's Andre Gray took part in a Twitter Q&A, team-mate James Tarkowski could not resist taking part, asking the striker: "Why you always so grumpy?" (Twitter)

Paul Pogba has tweeted a video of his new hairstyle - a pinkish number with a red zigzag - as he prepares for what could be his first start for Manchester United.

Barcelona's Cristian Tello wore an unusual T-shirt as he arrived in Italy for a season-long move to Fiorentina... 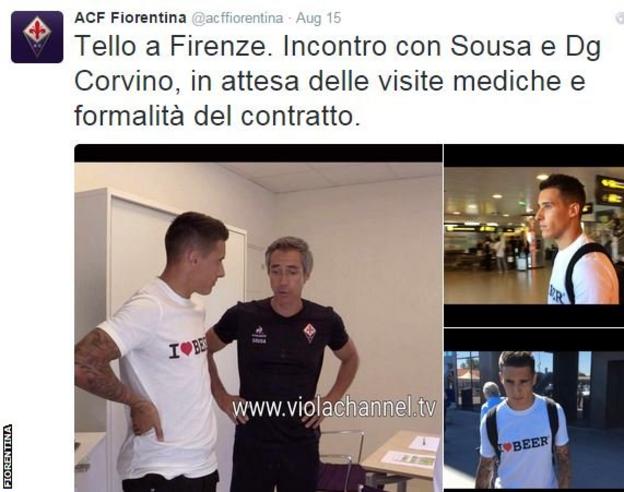 Dinamo Bucharest fans played a prank on rivals Steaua Bucharest before the Champions League defeat by Manchester City. They managed to get Steaua to hold a mosaic which read 'Only Dinamo Bucharest'. (101greatgoals.com)