Everton striker Romelu Lukaku, 23, has told manager Ronald Koeman that he will turn down Chelsea to stay at Goodison Park for at least another season. (Daily Mirror)

But Koeman has admitted that he is preparing a Plan B, in case the Belgium forward leaves the club. (Daily Mail)

Arsenal manager Arsene Wenger says "it is worth trying" to use Chile forward Alexis Sanchez, 27, as a striker, and compared him to Uruguay and Barcelona star Luis Suarez. (Sky Sports)

West Brom manager Tony Pulis says he wants to keep hold of Northern Ireland defender Jonny Evans, 28, who has been linked with a move to Arsenal. (ESPN)

Goalkeeper Joe Hart, 29, could trigger an exodus from Manchester City as midfielders Yaya Toure and Samir Nasri, defender Eliaquim Mangala and striker Wilfried Bony may all leave the Etihad in the transfer window. (Manchester Evening News)

West Brom are relying on long-term target Jeffrey Schlupp, 23, to force Leicester's hand with talks at a standstill between the two clubs over a £12m move for the wide man. (Birmingham Mail)

Arsenal forward Joel Campbell, 24, will join Sporting Lisbon on loan until the end of the season. (O Jogo, via Daily Express)

Sunderland boss David Moyes has offered defender Lamine Kone, 27, a new £50,000-a-week contract in a bid to stop him moving to Everton. (Sun)

But the Ivory Coast defender has rejected the contract, with Moyes questioning the back injury that has ruled Kone out of Sunday's match with Middlesbrough. (Daily Mail)

Club Brugge defender Bjorn Engels, 21, says he is too young to consider a move to Arsenal or Borussia Dortmund. (Het Laatste Nieuws, via Evening Standard)

Striker Gabriel Barbosa, 19, a target for Manchester United, could be set to leave Santos as the Brazilian side are experiencing financial difficulties. (HITC)

Former England defender Ashley Cole, 35, who is currently playing for LA Galaxy, says he wants to work for Chelsea after his playing career is over rather than Arsenal. (Evening Standard)

Jay Rodriguez's dad shut down a fan on Twitter after suggestions that the Saints striker may retire because of injury. Enrique Rodriguez first told Twitter: "Don't believe everything you hear I can tell you he is 100% fit," and when asked what the source of his information was, he replied: "I'm his dad."

Manchester United's Bastian Schweinsteiger may have been exiled from the first team by Jose Mourinho, but the German midfielder was at Old Trafford on Friday to watch his team play Southampton. (Twitter)

Mourinho's daughter Matilde was pleased with her father's first win as United boss at Old Trafford... 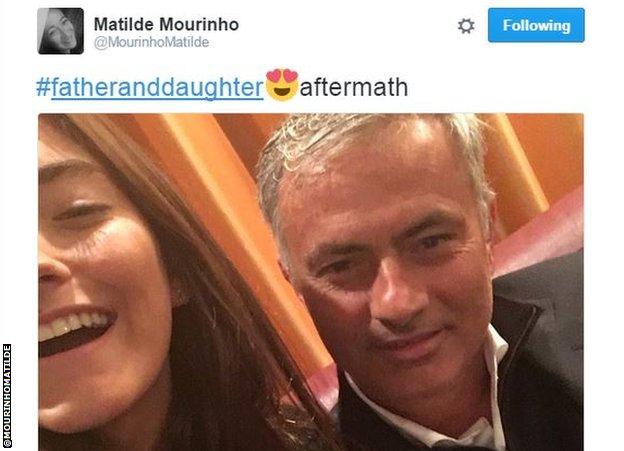 A few hours before Usain Bolt won gold in the men's 4x100m relay final, the world's fastest man and United fan tweeted: "Great start off to the evening @ManUtd #winnings"

Sir Bobby Charlton has seen his fair share of season-openers at Old Trafford...

Petr Cech has admitted he crashed his car after the 4-3 defeat by Liverpool last weekend. The goalkeeper said he "hit a pillar" and it was "one of those days". (Arsenal, via Daily Telegraph)

Hull City caretaker manager Mike Phelan compiles lengthy dossiers on all his side's opponents, with midfielder David Meyler joking Hull players even know "how many times they go to the toilet". (Daily Star)