But Wenger might need to spend heavily amid reports Mustafi could cost the Gunners £50m. (Daily Mirror)

Joe Hart, 29, will be allowed to leave Manchester City after they agreed to sign fellow goalkeeper Claudio Bravo, 33, from Barcelona in a deal worth up to £17m. (Daily Telegraph)

Everton's hopes of signing Hart depend on a chain of goalkeeper transfers - beginning with Barcelona completing a deal for Ajax's Jasper Cillessen, 27. (Liverpool Echo)

Liverpool manager Jurgen Klopp says he he would be an "idiot" to make panic buys in the wake of defeat at Burnley. (Guardian)

Hull caretaker-manager Mike Phelan has called on the club to allow him to sign more players after their impressive start to the Premier League season. (Daily Mail)

Colombia winger Juan Cuadrado, 28, is expected to complete a permanent move from Chelsea to Juventus in the next few days. (ESPN)

Valencia goalkeeper Diego Alves' future is in doubt as the 31-year-old Brazilian's predicted transfer might not happen. (Marca)

But Hammers manager Slaven Bilic is targeting one more "proper" signing of his own before the end of the window. (West Ham official website)

Tottenham have made a number of offers for Espanyol's Spanish goalkeeper Pau Lopez, 21.(Sky Sports)

A game in Germany between bitter rivals Dynamo Dresden and Red Bull Leipzig was marred when a severed bull's head was thrown by fans towards the pitch. (Goal.com - warning: contains graphic image)

Los Angeles Galaxy have ruled out a move for Joleon Lescott, with the 34-year-old defender seeking a way out of Championship club Aston Villa. (Daily Mirror)

West Ham youngster Ashley Fletcher had more reason than most to celebrate after his side's victory over Bournemouth in their first Premier League game at the former Olympic Stadium. 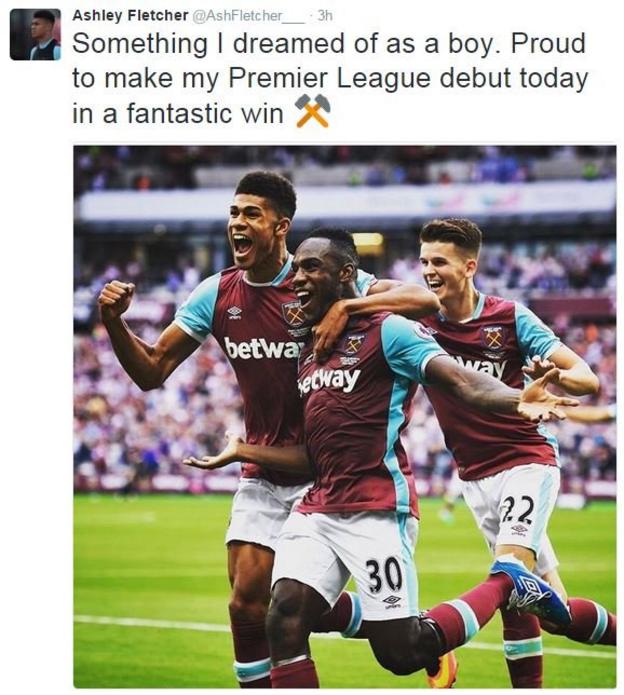 Fletcher's team-mate Andy Carroll, who has reached double figures just once in a Premier League season, remained confident on Twitter despite being ruled out for four to six weeks by a knee injury.

Ipswich manager Mick McCarthy pulled no punches when he laid into critical fans in a rant that contained some colourful language. (Daily Mail)

Middlesbrough midfielder Adam Clayton revealed more than he bargained for when he posed with his team-mates in the dressing room after Sunday's 2-1 win over Sunderland. (Sun)

Germany midfielder Robert Bauer has apologised for taunting Brazil fans after the home nation won Olympic gold in a penalty shoot-out on Saturday night. (AS)