Juventus are planning a move for Manchester United defender Matteo Darmian, 26, in January. (Tuttosport - in Italian)

Leicester City striker Jamie Vardy, 29, has revealed new England boss Sam Allardyce had the opportunity to sign him when he was in charge at West Ham. (London Evening Standard)

France forward Antoine Griezmann, 25, has insisted he will not leave Atletico Madrid as long as Diego Simeone is the manager, despite reports Manchester United were preparing a world-record bid in January. (Telefoot - in French)

England goalkeeper Joe Hart, 29 - who is on loan at Torino - has been described by Manchester City team-mate Willy Caballero as a "robot" and a "big cat". (Tuttosport)

Arsenal's Germany playmaker Mesut Ozil, 27, has told German newspaper Express he would like to take the number 10 jersey previously worn by Jack Wilshere, who left the club on loan last week.

The decision over whether Real Madrid striker Karim Benzema can return to the France team lies with manager Didier Deschamps, says French Football Federation president Noel le Graet. Benzema has been unavailable since being charged over his involvement in the alleged blackmail of international team-mate Mathieu Valbuena. (L'Equipe)

Bundesliga side HSV Hamburg are being linked with a January bid for Cardiff City's 27-year-old midfielder Aron Gunnarsson. (Wales Online)

A poll shows 61% of fans are confident Uruguay striker Edinson Cavani, 29, can take on the goalscoring responsibility at Paris St-Germain following the departure of Zlatan Ibrahimovic, 34, to Manchester United - while 69% say former Liverpool forward Mario Balotelli, 26, is a good signing for Nice. (L'Equipe - in French)

Wales boss Chris Coleman was tempted by an approach from Hull during the summer but resisted the Premier League club because he is desperate for more success on the international stage. (Daily Mail)

Former Manchester City youth player Adrien Rabiot, 21, wants a move back to England after the midfielder fell out of favour at Paris St-Germain. (Sun)

Bordeaux goalkeeper Cedric Carrasso, 34, rejected a move to Sunderland in the final minutes of transfer deadline day. (L'Equipe - in French)

West Brom boss Tony Pulis is set to take training this week and is expected to stay on as manager despite reports he is considering his future. (Daily Mirror)

Midfielder Jack Wilshere is delighted with the reception he has received since his loan move to Bournemouth from Arsenal. 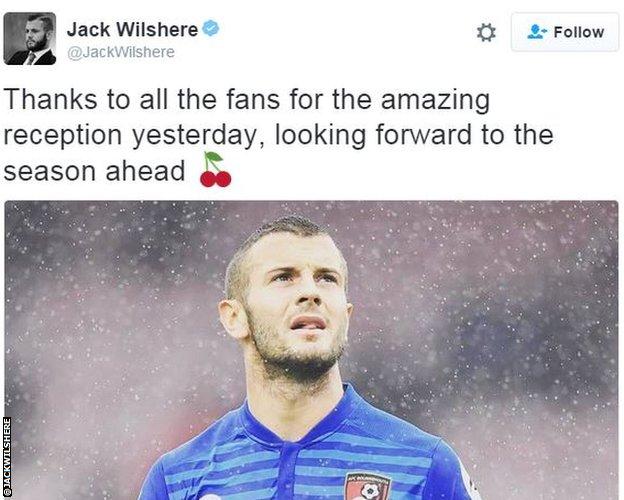 Michael Carrick paid tribute to Manchester United team-mate Wayne Rooney after the England captain became his country's most capped outfield player of all time on Sunday.

The Germany team's English-language twitter account really loves Thomas Muller, who scored in their win over Norway in a World Cup qualifier on Sunday. 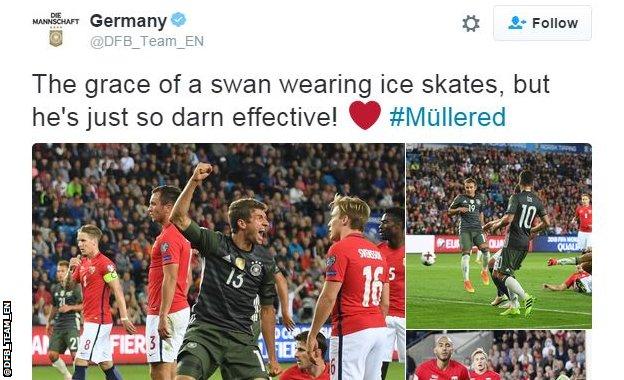 Barcelona playmaker Lionel Messi says he dyed his hair blond as part of a new start following the announcement of his short-lived international retirement this summer. (Sun)

Manchester United have removed a plaque from former manager Sir Matt Busby's old seat at Old Trafford and have moved his family's season tickets from the director's box to another part of the stadium. (Daily Mail)

And the Red Devils' players have been banned from swapping shirts with opposition players, as it is "not cost effective". (Sun)