Tottenham are confident they will break the UK record for stadium naming rights once the club's new 61,000-seater ground is built. (Sun)

Chelsea will make another offer for Lazio defender Stefan de Vrij, 24, in January after having a bid for the Netherlands international rejected in the summer. (Calciomercato, via Daily Star)

Wales forward Gareth Bale is in negotiations with Real Madrid over a new long-term contract that stands to put him in the same pay bracket as team-mate Cristiano Ronaldo. (Guardian)

Arsenal's Chile forward Alexis Sanchez, 27, wants a wage increase and a buyout clause included in any new deal he signs with the club. (Daily Mirror)

The Gunners will offer new deals to Sanchez and Germany midfielder Mesut Ozil, 27, but the futures of England contingent of Jack Wilshere, 24, Alex Oxlade-Chamberlain, 23, and 26-year-old Kieran Gibbs are less certain. (Daily Mail)

Manchester United and Everton both want to sign Juventus' 18-year-old Cyprus midfielder Grigoris Kastanos, who will cost around £17m. (Sun)

Barcelona forward Neymar, 24, held summer talks with French champions Paris St-Germain, who were willing to give him a private jet and put his name on a chain of hotels, according to one of the Brazil international's representatives. (ESPN)

La Liga is investigating how Barcelona handled Neymar's transfer from Santos to the Spanish side in 2013. (Catalunya Radio, via AS)

Any takeover of Hull City would be welcomed by the local council, according to one of its senior councillors. (Hull Daily Mail)

Former Aston Villa winger Charles N'Zogbia, 30, who had a trial at Sunderland this summer, will join French side Nantes. (L'Equipe, via Birmingham Mail)

Inter Milan owe Manchester City £12.2m for Montenegro forward Stevan Jovetic due to a clause in the 26-year-old's loan deal that means the move became permanent when he made his first appearance of the season. (Gazzetta dello Sport - in Italian)

Former Liverpool winger Ryan Babel, 29, is set to join Spanish side Deportivo la Coruna. The Dutchman has been without a club since leaving UAE side Al Ain earlier this year. (AS)

Arsenal forward Olivier Giroud, 29, claims 23-year-old PSG midfielder Marco Verratti tricked the referee into sending him off during their 1-1 draw in the Champions League.(Telegraph)

Gunners boss Arsene Wenger has promised Colombia goalkeeper David Ospina, 28, he will remain in goal for Champions League matches in order to keep him at the club.(Daily Express)

Arsenal's 34-year-old first-choice goalkeeper Petr Cech is happy with the agreement to let Ospina play in European games ahead of him.(Daily Star)

Former Liverpool captain Steven Gerrard, 36, says he gets on well with current Reds boss Jurgen Klopp but there is no job opportunity for him at Anfield at the moment. (Liverpool Echo) 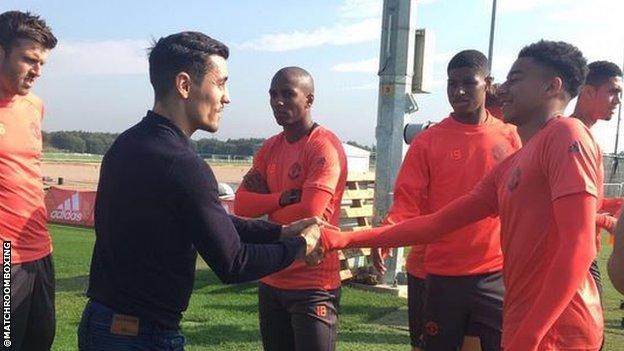 However, the United midfielder later posted this message to Crolla on Twitter...

Tottenham defender Kyle Walker had a crack at singing the Champions League anthem before the club's opening game in the competition.

Arsenal defender Hector Bellerin has been reflecting on his side's 1-1 Champions League draw with PSG: He wrote on Twitter: "Tough game, but a positive result for us in the end. On to Hull for Saturday."

Arsenal and Wales midfielder Aaron Ramsey has been enjoying this spell of hot weather: 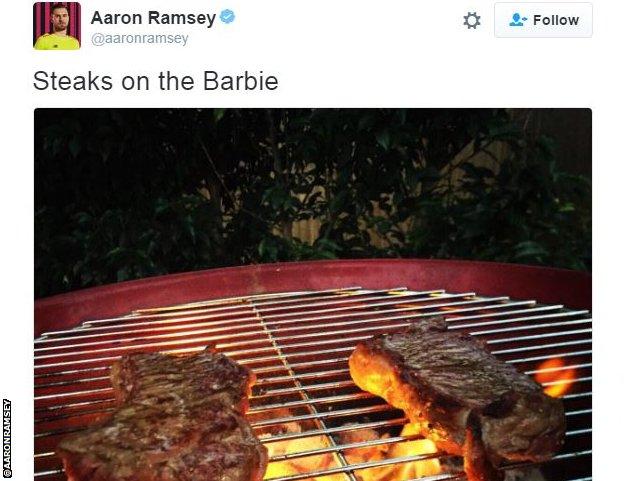 A tweet put out by League Two side Mansfield Town went viral after it claimed an event with a clairvoyant - people known for their psychic abilities don't forget - was cancelled due to "unforeseen circumstances".

Borussia Monchengladbach left 'sick notes' on the seats of supporters who stayed in England a day longer to watch their rescheduled Champions League match against Manchester City. (Daily Mirror)