Manchester City forward Kevin de Bruyne, 25, could be sidelined for a month by the hamstring injury he sustained in Saturday's win over Swansea. (Daily Mail)

De Bruyne will fly to Barcelona on Monday for more tests and to begin treatment but is certain to be out of action for at least three weeks. (Sun)

Kevin de Bruyne initially thought he had suffered a minor strain but the injury is a minor tear, although the player and City may have to wait until Wednesday for a full prognosis. (Guardian)

Chelsea manager Antonio Conte is targeting Burnley's Michael Keane, 23, and Middlesbrough's Ben Gibson, 23, as he plans an overhaul of his backline. Defenders Gary Cahill, 30, and Branislav Ivanovic, 32, are expected to be phased out of the Blues team as Conte targets a new full-back and two new centre-halves. (Daily Mail)

However, Juve director Giuseppe Marotta says there has been no contact from City. (Mediaset Premium via Manchester Evening News)

Striker Wayne Rooney, 30, is prepared to accept he is no longer an automatic pick for Manchester United following manager Jose Mourinho's decision to drop him for Saturday's match against Leicester. (Daily Mirror)

Rooney will not quit United and will see out the two years of his existing contract at Old Trafford, with an option for a third. (Daily Express)

Manchester United boss Mourinho has had a private meeting with Rooney and told the club captain to sort his own form out before criticising any of his team-mates. (Sun)

Arsenal midfielder Francis Coquelin, 25, could be sidelined for months rather than weeks by the knee injury he sustained against Chelsea on Saturday if he has suffered a recurrence of the medial ligament injury that kept him out for two months last season. (Daily Mail)

Manchester United might have a better chance of signing 25-year-old Atletico Madrid forward Antoine Griezmann now he has left his agent. (Independent)

Bristol City's former West Ham midfielder Gary O'Neil is perplexed by the Hammers' recent poor fortunes. The east London club were beaten 3-0 at home by Southampton and remain 17th in the Premier League with three points.

And is this ex-Manchester United defender a good luck charm? Nemanja Vidic was at Old Trafford on Saturday to watch his former side beat Leicester 4-1. 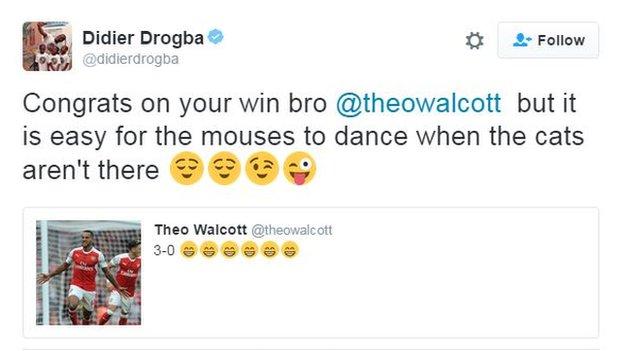 Newcastle United goalkeeper Matz Sels closed his Twitter account following criticism from some of the club's fans after the 1-1 draw at Aston Villa. (Daily Mirror)