Real Madrid forwards Cristiano Ronaldo, 31, and Gareth Bale, 27, have agreed new contracts, with Wales international Bale offered a £91m deal as an incentive to reject a move to Manchester United next summer. (Cope, via Daily Express)

Arsenal and Tottenham both want to sign Real Madrid midfielder Isco, 24, who is out of contract in 2018. (Diario Madridista, via Daily Star)

Arsenal attackers Mesut Ozil and Alexis Sanchez, both 27, want £250,000 a week each in wages to extend their contracts. The declining value of the pound in the wake of the United Kingdom's decision to leave the European Union is partly behind their demands. (Times)

Gunners defender Per Mertesacker, 32, is wanted by former side Hannover. (Sun)

Interim boss Mike Phelan is set to be given the Hull City manager's job on a permanent basis.(Sun)

Arsenal defender Shkodran Mustafi, 24, is determined not to be affected by an "incredible" price tag following his summer move from Valencia for a fee in excess of £35m. (Daily Mirror)

West Ham have an obligation to buy forward Simone Zaza after 10 appearances, according to the 25-year-old's agent and father. (Tutto Juve, via International Business Times)

Sunderland fear they will have to pay £10m to sign former Inter Milan midfielder Ricardo Alvarez, 28, if a Court of Arbitration ruling goes in the Serie A club's favour. (Daily Express)

Manchester City midfielder Fernandinho, 31, is set to sign a two-year contract extension after entering the final 12 months of his existing deal. (Daily Mail)

Manchester United have been "disrespectful" to midfielder Bastian Schweinsteiger, 32, according to Manchester City midfielder Ilkay Gundogan, 25.(Bild, via ESPN)

But former Barcelona midfielder Deco, who played under Manchester United boss Jose Mourinho at Porto and Chelsea, says players at Old Trafford have to get over criticism from their manager.(Daily Star)

West Ham's vice-chairman Karren Brady insists a move to London Stadium was a crucial part of "rebranding" the club. (Guardian)

Real Madrid forward Alvaro Morata, 23, spoke to several teams before agreeing to rejoin the Spanish side from Juventus this summer.(Cadena Ser, via Metro)

Liverpool striker Divock Origi, 21, says he has not heard the "rumours" linking him with a move to Juventus. (HLN, via Metro)

Chelsea forward Tammy Abraham, 18, who is on loan at Bristol City, says he found out about his England Under-21 call up on television. (Evening Standard)

Manchester United and England forward Wayne Rooney stumbled across some of old team-mate Gary Neville's golf kit when preparing for a round: 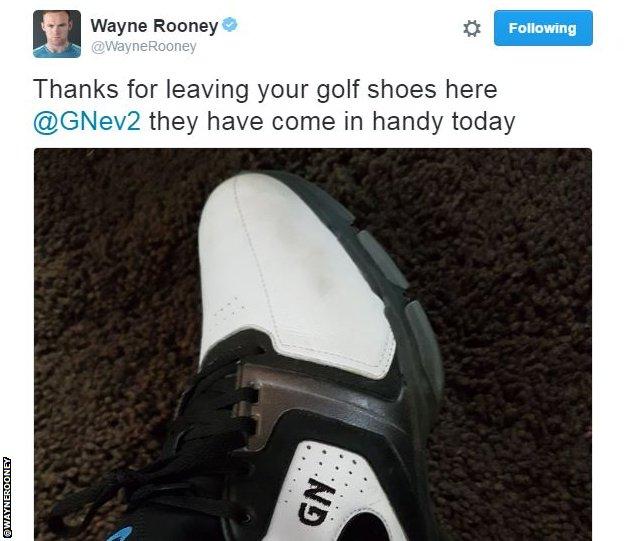 The debate over how many Accrington Stanley fans travelled to Chesterfield for their EFL Trophy win on Tuesday continues...

Stoke City's Jonathan Walters is not a fan of Fifa Ultimate Team, it seems. Though Hull City's David Meyler, his Republic of Ireland team-mate, certainly is.

Manchester United midfielder Ander Herrera turned up to Spain training without any boots and had to buy a new pair after he was called up to replace the injured Javi Martinez. The 27-year-old had been on holiday in Madrid when he found out he was required. (El Confidencial)

West Ham are set to release a movie called 'Iron Men' to celebrate the club's move from the Boleyn Ground to the London Stadium.(Evening Standard)