Manchester United have held more talks with Atletico Madrid about a move for £80m-rated France forward Antoine Griezmann, 25, who they see as a replacement for 30-year-old captain Wayne Rooney. (Sunday Mirror)

However, Pickford is to be handed a wage increase by the Black Cats in an attempt to keep him at the club. (Sunday Mirror)

England keeper Joe Hart, 29, who is on loan at Torino, has played his last game for Manchester City and will leave the club permanently next summer because he feels let down by boss Pep Guardiola. (Sunday Express)

Newcastle United are keen on Partizan Belgrade's 19-year-old defender Nikola Milenkovic and could make a move in January. (Chronicle)

Southampton's club record £16m signing Sofiane Boufal, 23, will have to wait to make his first start for the club as boss Claude Puel eases the Morocco midfielder back after a knee injury. (Southern Daily Echo)

Brighton boss Chris Hughton wants managers to be given more time after a spate of sackings in the Championship. (The Argus)

Frustrated Manchester City fans claimed thousands missed the start of their team's 1-1 draw with Everton on Saturday because turnstiles were not working properly. (Manchester Evening News)

Former Valencia and England coach Gary Neville says he will not coach again. (Mail on Sunday)

MPs will demand the Football Association sets up an inquiry into claims of widespread corruption in football. (Sunday Telegraph)

Everton and Belgium striker Romelu Lukaku was not too unhappy with a point and a goal against Manchester City at Etihad Stadium. (Twitter) 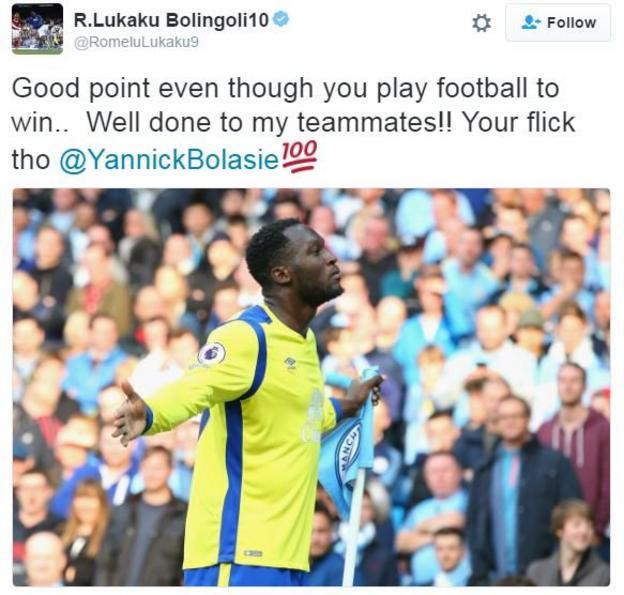 Despite a busy day of Premier League action, Southampton striker Charlie Austin was enjoying other forms of entertainment. (Twitter)

And how about this for a gesture? Stewart Donald, chairman of National League Eastleigh, donated his club's share of the gate receipts to opponents North Leigh - his former club - after a 6-0 win in the FA Cup fourth qualifying round. (Twitter)

West Brom midfielder Nacer Chadli, 27, owes Tony Pulis dinner - after the Baggies manager bet he would get his £13m signing back into the Belgium squad. (Birmingham Mail)

Hull City boss Mike Phelan has been unable able to park in the manager's space at the club's training ground since his appointment was confirmed - because it's been occupied by a white van. (Hull Daily Mail)

A Manchester United fan has had the Liverpool crest tattooed on to his leg to raise money for charity. (Liverpool Echo)