Jose Mourinho is plotting a revamp of his defence and is targeting Roma's Germany defender Antonio Rudiger. The 23-year-old is valued at £35m by the Serie A club. Defenders Marcos Rojo and Matteo Darmian, both 26, could be sold in January, while Chris Smalling, 26, and Daley Blind, 26, face uncertain futures at Old Trafford. (Daily Mail)

Chelsea are preparing to submit an offer for 27-year-old Paris St-Germain midfielder Javier Pastore in January. (Get French Football News, via Daily Star)

Former England manager Sam Allardyce is understood to have rejected an early return to management with Wolves. (Times - subscription required)

Fiorentina midfielder Josip Ilicic wants to leave the Italian club and the 28-year-old is a target for Leicester City. (Calciomercato)

French midfielder Steven N'Zonzi, 27, is ready to snub a Premier League return and sign a new deal with Spanish side Sevilla. (Mirror)

Everton outcast Oumar Niasse could be on his way to Galatasaray. The 26-year-old Senegal striker has been linked with a January move to the Turkish club. (Mirror)

West Ham will give stewards hand-held video cameras as part of increased security measures at the London Stadium. (Telegraph)

Stoke City boss Mark Hughes wants to sign goalkeeper Lee Grant, 33, who is on loan at the club from Derby County, on a permanent deal in January. (Stoke Sentinel)

Paul Pogba's transfer to Manchester United was two years in the making, according to the 23-year-old France midfielder's agent Mino Raiola. (Financial Times)

Peter Crouch made this offer to fans on Friday...

Which prompted this response from Stoke team-mate Charlie Adam...

Juventus left-back Patrice Evra has posted a video of himself dressed as a panda, in a stand against racism. (Instagram) 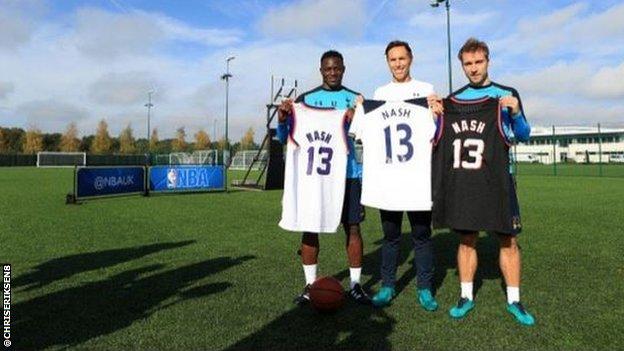 Believe it or not, this is Southampton defender Oriol Romeu on the front of the matchday programme for Sunday's game against Chelsea. (Instagram)

Marouane Fellaini has dyed his afro ginger. He was spotted in Manchester city centre with his twin brother, who had a matching haircut. (Daily Express)

Barcelona and Brazil forward Neymar has spent £7.2m on a new house in Rio de Janeiro that boasts six suites, a helipad, a swimming pool, tennis courts, a gymnasium, a subterranean cave and its own pier. (O Globo, via AS)

Under-pressure Sunderland manager David Moyes has joked he may be soon looking for a job at the city's Nissan factory. (Guardian)