West Ham's French playmaker Dimitri Payet, 29, has refused to rule out a January move away from the club. (Telefoot, in French)

But manager Slaven Bilic will plead with the midfielder to remain at London Stadium. (Daily Mirror)

Manchester City midfielder Ilkay Gundogan has predicted that Argentina striker Sergio Aguero will not play for another European club in his career, despite speculation linking the 28-year-old to Real Madrid. (Daily Mirror)

Sevilla midfielder Steven N'Zonzi says he is flattered by rumoured interest in him from Chelsea and Barcelona, but the 27-year-old Frenchman is happy at the club. (L'Equipe, in French)

Liverpool and France defender Mamadou Sakho, 26, has been urged to leave the club in January by his national team coach Didier Deschamps. (Telefoot, via Daily Mirror)

Former Liverpool and England captain Steven Gerrard, 36, is ready to announce his retirement after LA Galaxy were knocked out of the MLS play-offs. (Guardian)

Everton, Sunderland and West Ham are all interested in signing Dynamo Kiev's Poland striker Lukasz Teodorczyk, 25, who is currently on loan at Anderlecht. (Daily Mirror)

As many as 10 Premier League clubs have been scouting Nice's French centre-half Malang Sarr, 17. (BT Sport)

Colombia striker Radamel Falcao, who spent disappointing loan spells at Manchester United and Chelsea in the past two years, could be set to sign a new contract with Monaco. (BT Sport)

Manchester United winger Memphis Depay, 22, will reject a move to Marseille in favour of joining another Premier League side. (L'Equipe, via Daily Express)

Liverpool midfielder Emre Can, 22, says he is close to agreeing a new deal with the club. (Omnisport, via Daily Star)

Everton midfielder Tom Cleverley, 27, says the Toffees were made to feel "inferior" during their 5-0 thrashing by Chelsea on Saturday. (Daily Telegraph)

Match of the Day presenter Gary Lineker is at it again...

Former Manchester United goalkeeper Peter Schmeichel was impressed by Michael Carrick's performance in the club's 3-1 win at Swansea on Sunday, but thinks the club missed out by not signing Germany and Real Madrid midfielder Toni Kroos. 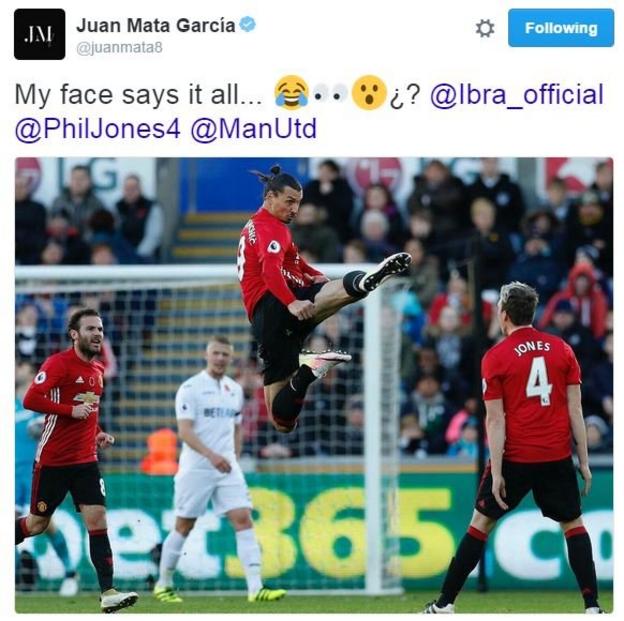 Borussia Dortmund midfielder Mario Gotze, 24, posted a video of a "mannequin challenge" on Instagram, with a number of team-mates in the gym.

West Brom striker Saido Berahino, 23, posted a picture on Snapchat of his six-pack with the caption "fatboy" after being put on a weight-loss training plan by boss Tony Pulis.

Ex-England defender Wayne Bridge, 36, has signed up to be a contestant on I'm A Celebrity Get Me Out Of Here. (Sun)

A 17-year-old Liverpool youth-team goalkeeper was left on crutches after being bitten by a fly. (Liverpool Echo)