RB Leipzig will find it hard to resist a third and final offer of £80m from Liverpool for midfielder Naby Keita, 22, reports Guinean journalist. (Liverpool Echo)

Crystal Palace have suffered a blow in their reported pursuit of Dutchman Jasper Cillessen, 28, with the goalkeeper insisting he is happy at Barcelona. (Croydon Advertiser)

Arsenal will compete with Tottenham for Ross Barkley's signature with the 23-year-old's Everton career in doubt. (Daily Express)

West Brom manager Tony Pulis has dismissed reports linking winger Nacer Chadli, 27, with a move to Swansea City, saying he does not want to lose players and that the Baggies are looking to bring players in. (Daily Star)

Manchester City have had a £44.5m bid for left-back Benjamin Mendy rejected by Monaco. The Ligue 1 side are demanding £54m for the 23-year-old. (Daily Mail)

And City will complete the signing of 26-year-old right-back Danilo from Real Madrid on Friday. (Marca - in Spanish)

Barcelona have bid £72m for Liverpool's Brazil midfielder Philippe Coutinho, 25, but the Reds are expected to reject the offer. (Daily Mail)

The Reds say the La Liga giants are wasting their time. (Liverpool Echo)

Manchester United have turned their attention to a £25m deal for Paris St-Germain right-back Serge Aurier, 24, as they struggle to reach a deal with Monaco for Fabinho, 23. (Independent)

Midfielder Jack Wilshere, 25, is open to a move to West Ham - if they can agree a fee with Arsenal. (Daily Star)

Tottenham have asked to be kept informed of Riyad Mahrez's situation at Leicester City, but the Foxes will have to lower their £50m asking price for the 26-year-old forward for Spurs to make a move.(Standard)

Leicester players are ready to "dig out" Mahrez if he does not put in 100% effort, says midfielder Andy King.(Leicester Mercury)

Crystal Palace are planning a new bid for Arsenal defender Calum Chambers, 22, after their opening offer of £16m was rejected.(ESPN FC)

Fulham target Diego Rolan could make the Cottagers wait until the final days of the transfer window to sign him. The Bordeaux striker, 24, is holding out for a move to the Premier League or Spain.(Sky Sports)

Bournemouth winger Max Gradel has told the club he wants to join Toulouse. The Cherries have already rejected a loan offer from the French club for the 29-year-old.(L'Equipe, via Talksport)

Stewart Downing's anticipated departure from Middlesbrough has been delayed as Birmingham City continue to try to strike a deal for the 32-year-old midfielder.(Gazette) 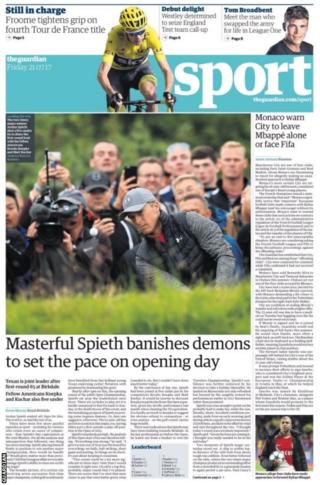 Following John Terry's departure from Chelsea, defender David Luiz admits he 'enjoys' the responsibility of being captain but expects centre-back partner Gary Cahill to be awarded the armband. (Metro)

Stuart Manley once had a trial at Manchester United, but the Welshman turned his back on football and is now playing in golf's Open Championship. (Daily Mail)

Tottenham are continuing to enjoy their pre-season trip to the United States... 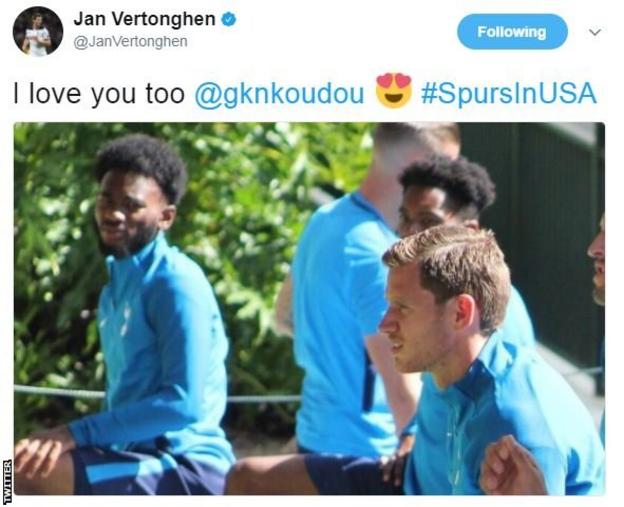 Liverpool manager Jurgen Klopp says he owes the club's recruitment staff a debt of gratitude over striker Dominic Solanke, who was such an unknown quantity he struggled to even find DVDs of the 19-year-old in action. (Liverpool Echo)

Lucas Leiva, who joined Lazio from Liverpool on Tuesday, has been getting to know his new colleagues, including club mascot Olimpia...

The best of Thursday's transfer news

PSG are willing to pay Neymar a signing on fee of £45m and will offer him a five-year contract worth £596,000 a week after tax. (Daily Mail)

Chelsea are holding out for £44m for Atletico Madrid target Diego Costa, 28, after agreeing a deal to sign his fellow striker Alvaro Morata, 24, from Real Madrid. (Independent)