Liverpool manager Jurgen Klopp says Coutinho is "comfortable" at the club after holding talks with the player amid Barca's interest. (ESPN FC)

Barcelona believe signing playmaker Coutinho could help keep his 25-year-old international team-mate Neymar, who has been linked with a move to Paris St-Germain. (Mail on Sunday)

PSG are increasingly confident of signing forward Neymar for £196m from Barcelona, with the Brazilian supposedly having agreed a contract worth £27m a year after tax. (Sunday Express)

Arsenal manager Arsene Wenger has denied forward Alexis Sanchez, 28, is on the verge of a £70m move to Paris St-Germain. (Standard)

Liverpool and Manchester City are still in the race to sign 18-year-old Monaco forward Kylian Mbappe. (Le 10 Sport, via Star on Sunday)

Chelsea will make a formal offer for Arsenal midfielder Alex Oxlade-Chamberlain within the next 48 hours but face competition from Manchester City for the 23-year-old. (Sunday Express)

The Stamford Bridge club have spent nearly £130m this summer but Blues boss Antonio Conte says they need to make more signings to improve the quality of the squad. (Sunday Telegraph)

Chelsea have made a move for 20-year-old Brazilian forward Richarlison, who was expected to join Ajax from Fluminense for £12m. (Mail on Sunday)

Algeria international Mahrez will reject a move to Roma as he tries to push through a £35m switch from the Foxes to Arsenal. (Sun)

Defender Matteo Darmian, 27, says he is happy to stay at Manchester United this summer, despite being linked with a return to Italy. (Independent)

Everton manager Ronald Koeman wants to bring another "one or two quality players" to the club before the end of the transfer window. (Liverpool Echo)

Aston Villa's decision to leave defender Tommy Elphick, 29, and striker Ross McCormack, 30, out of their pre-season games in Germany has given Sunderland hope of signing the pair. (Birmingham Mail)

Tottenham midfielder Christian Eriksen, 25, says "it's an English thing" to think spending money will bring success to a club. (Mail on Sunday)

Las Palmas midfielder Kevin-Prince Boateng will wear Abdelhak Nouri's shirt in a mark of respect after the Ajax midfielder collapsed on the pitch earlier this month. 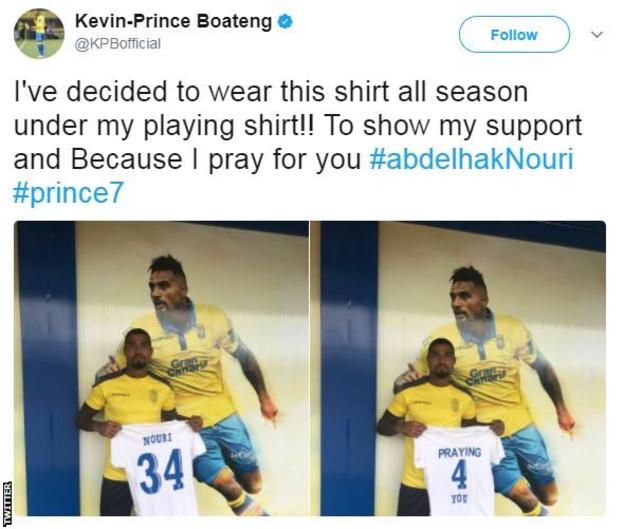 New Manchester United signing Victor Lindelof, 23, says he is getting into life under manager Jose Mourinho "better and better every day".(Manchester Evening News)

The best of Saturday's transfer news

Neymar's chances of leaving Barcelona for Paris St-Germain in this summer's transfer window are "90%". (Sky Sports)

The 25-year-old Brazil forward has told team-mates he is joining Paris St-Germain, with the French club pursuing a world record £196m transfer. (Le Parisen - in French)

Manchester United have made a £35m bid for Chelsea midfielder Nemanja Matic, 28, and have been told they can have him for £50m. (Daily Mirror)