Turkish side Antalyaspor have made a move to sign Arsenal midfielder Jack Wilshere, 25, but the club president says Arsenal "want a lot" for the player. (Turkish-Football.com)

England Under-20 and Newcastle goalkeeper Freddie Woodman, 20, has a host of Championship clubs keen to take him on loan this season.(Chronicle Live)

Arsenal forward Lucas Perez, 28, has been offered a 10-year deal with Deportivo La Coruna, as speculation around the Spaniard's future grows.(Metro)

Brazilian forward Neymar, 25, has told Barcelona team-mates Lionel Messi and Luis Suarez he will stay at the club, after the pair persuaded him not to join Paris St-Germain in a world record £200m deal. (Sport)

Arsenal forward Alexis Sanchez's transfer to PSG is on hold after talks collapsed over the 28-year-old's transfer fee and wage demands. (Le Parisien via Talksport)

Gunners boss Arsene Wenger fears Chile international Sanchez has been tapped up but reiterated that the player, who has one year left on his deal, will not be sold. (Daily Telegraph)

Chelsea will step up their interest in 23-year-old Arsenal midfielder Alex Oxlade-Chamberlain this week but can expect a battle from Manchester City. (Daily Express)

Swansea City have been given permission to hold talks with their former striker Wilfried Bony after putting in place a deal with Manchester City for the 28-year-old. (Wales Online)

Tottenham are closing in on the signing of Germany Under-21 defender Jeremy Toljan, 22, from Hoffenheim.(Record via Sun)

Liverpool boss Jurgen Klopp says 23-year-old midfielder Emre Can, who has one year remaining on his contract, is going nowhere this summer and that there have been "good talks" over a new contract. (Liverpool Echo)

But Juventus will make a bid of between £27m and £31m for Germany international Can and, if that fails, will try to sign him on a free transfer next summer. (Tuttosport via Daily Mail)

Liverpool will not make a move for Southampton centre-back Virgil van Dijk, 26, unless they are invited to do so by the south coast club. (Daily Mail)

Manchester City have dropped their asking price for 30-year-old midfielder Samir Nasri, who is being shunned by team-mates on the club's pre-season tour because of his arrogance, from £21m to £10m. (Times - subscription required)

Talks between Leicester City winger Riyad Mahrez and Roma have taken place but the Foxes are still unwilling to accept an offer of £30m for the 26-year-old. (Gianluca di Marzio)

Liverpool's chances of signing RB Leipzig midfielder Naby Keita are looking increasingly remote as the German club insist they will not sell the 22-year-old Guinean this summer. (Sky Sports)

The Reds will not increase their £66m bid for Keita and will instead return to sign the player in 12 months when his release clause will be £48m. (Daily Telegraph)

Inter Milan boss Luciano Spalletti says the club could sell winger Ivan Perisic, 28, if they "are satisfied with the money" amid interest from Manchester United. (Daily Mirror)

Bayer Leverkusen striker Javier Hernandez, 29, will fly to London on Tuesday to complete his move to West Ham. (Sky Sports)

Leicester City are closing in on Coventry City's George Thomas, 20, and are preparing to make a second bid of £500,000 for the striker. (Independent)

Swansea have made a £3m bid for Barnsley full-back Andy Yiadom, 25, after their first bid was rejected. (Sun)

Leicester striker Jamie Vardy, 30, says he has "no regrets" over not moving to Arsenal last summer. (Daily Mirror)

Former France and Gunners winger Robert Pires says Arsenal cannot afford to sell Alexis Sanchez or Olivier Giroud if they want to challenge for the title.(Talksport) 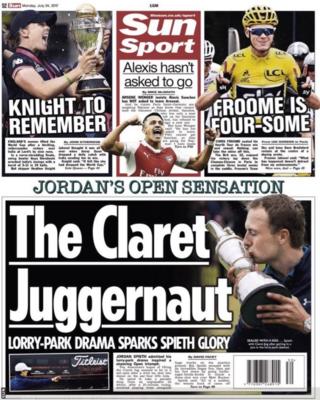 Barcelona defender Gerard Pique has told supporters what he thinks about the rumours linking Neymar with a move away from the Nou Camp...

Everton took advantage of The Open being on their doorstep... 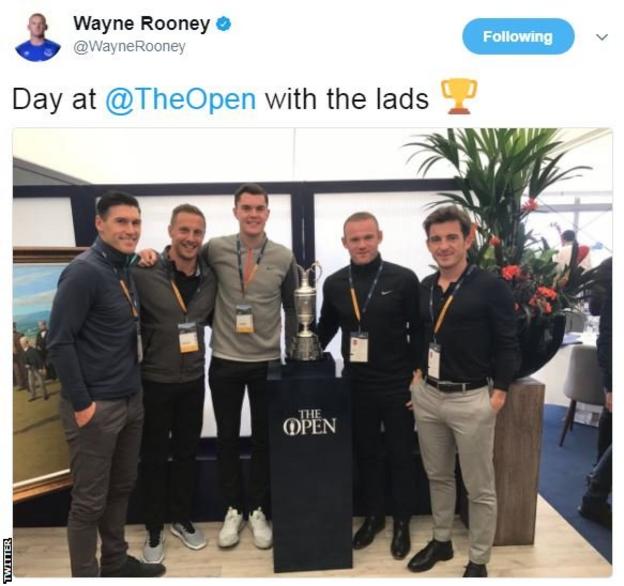 Aston Villa won the Cup of Traditions by beating Hertha Berlin 2-0 in Germany and it's the weirdest-looking trophy we've ever seen. 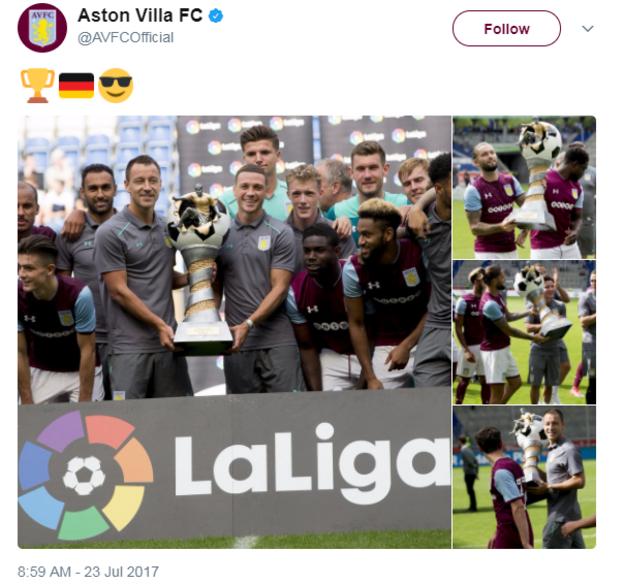 And a Villa fan seems to have found a replica of the cup available for sale for £13. (Birmingham Mail)

Chelsea midfielder Cesc Fabregas, 30, says strikers Alvaro Morata, 24, and Michy Batshuayi, 23, will be "under pressure" to get up to speed quickly as they are the club's "main strikers". (Times - subscription required)

Manchester United's Henrikh Mkhitaryan, 28, says he will be a "better player" after some tough times last season. (Guardian)

The best of Sunday's transfer news

PSG are increasingly confident of signing forward Neymar for £196m from Barcelona, with the Brazilian supposedly having agreed a contract worth £27m a year after tax. (Sunday Express)

Arsenal manager Arsene Wenger has denied forward Alexis Sanchez, 28, is on the verge of a £70m move to Paris St-Germain. (Standard)

Chelsea will make a formal offer for Arsenal midfielder Alex Oxlade-Chamberlain within the next 48 hours but face competition from Manchester City for the 23-year-old. (Sunday Express)