Chelsea failed in a late bid to buy Kyle Walker, 27, from Tottenham. The England right-back moved to Manchester City for an initial £45m. (Evening Standard)

Cardiff City manager Neil Warnock says "a couple" of clubs have shown interest in winger Craig Noone, 29, this summer, but there has been no contact for any of his other players. (Wales Online)

Barcelona will try to sign Liverpool forward Philippe Coutinho, 25, should they lose Neymar to PSG. (Talksport)

Coutinho has asked Liverpool to let him leave for Barcelona, and has already agreed personal terms with the La Liga club. (RAC1, via Star)

Manchester City manager Pep Guardiola says his club have the finances to challenge Real Madrid for the signing of Mbappe.(Mail)

Meanwhile, Bale has rejected a possible move to Arsenal. The Gunners wanted the Wales international to replace Alexis Sanchez.(Don Balon, via Star)

Midfielder Jack Wilshere, 25, wants to stay in England if he leaves Arsenal. (ESPN)

Manchester United manager Jose Mourinho has given the clearest indication yet that Swedish striker Zlatan Ibrahimovic, 35, will re-sign for the club. (Times - subscription required)

Arsenal are closing in on a £45m deal for Monaco's French midfielder Thomas Lemar. (Sun)

Or, Lemar will stay at the Ligue 1 club after Monaco vice-president Vadim Vasilyev said the 21-year-old is not for sale. (Metro)

Manchester United are still keen to sign Chelsea's 28-year-old midfielder Nemanja Matic, and believe they can persuade the Premier League champions to sell for a fee over £40m. (Independent)

France centre-back Mamadou Sakho, 27, has not been included in Liverpool's 30-man squad for their three-match tour of Germany.(Liverpool Echo)

Chelsea want to borrow £500m to fund the building of their new stadium, rather than relying on the cash reserves of owner Roman Abramovich.(Times - subscription required)

The Blues are in talks with interested parties over a naming rights deal for their new stadium, but the club insist the name Stamford Bridge will be preserved in some way. (Evening Standard)

Chelsea boss Antonio Conte says if he could buy any striker in the world, he would go for Tottenham's 23-year-old forward Harry Kane.(Daily Mail) 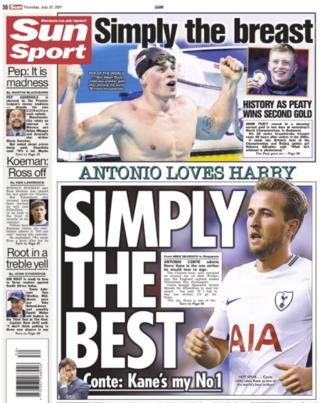 The Sun back page on Thursday

Zlatan Ibrahimovic has been depicted on a 1,000 kroner note by a Swedish artist. "You have Benjamin Franklin and you have me," the striker wrote on Instagram.

England goalkeeper Joe Hart, 30, revealed why he has chosen to wear the number 25 shirt on loan at West Ham from Manchester City. (Evening Standard)

Barcelona have sent officials to England to try to sign Philippe Coutinho despite Liverpool rejecting a £72m bid from the Spanish giants for the 25-year-old forward. (Sport, via Daily Express)

Liverpool insist Coutinho is not for sale at any price, but Barca are prepared to bid £80m. (Daily Star)

Bayern Munich midfielder Renato Sanches has revealed he wants to leave, with AC Milan and Manchester United interested in the £43m-rated 19-year-old. (Independent)

Arsenal face the prospect of taking a sizeable loss on Spanish striker Lucas Perez after Deportivo La Coruna made a £9m bid for the 28-year-old. (Evening Standard)