Neymar's father asked Paris St-Germain to delay formal negotiations with Barcelona over a £450m deal for his son until after 31 July - the day he earns a £23.3m commission for his part in persuading the 25-year-old forward to sign a new contract last October. (Sunday Times - subscription required)

If Brazil international Neymar does leave to join PSG, Barcelona could target Atletico Madrid and France striker Antoine Griezmann, 26, as his replacement. (Marca)

Once a deal is done for Neymar, PSG will then lodge a £35m bid to sign 28-year-old striker Alexis Sanchez from Arsenal. (Sunday Express)

But Chile forward Sanchez is also ready to submit a transfer request to force through a move to Manchester City. (Sunday Mirror)

Liverpool target and Guinea midfielder Naby Keita, 22, will "100%" stay at RB Leipzig, according to the German side's coach. (Observer)

Chelsea midfielder Nemanja Matic's £50m move to Manchester United is being held up by disputes over potential bonus payments to the Premier League champions as part of a deal for the 28-year-old Serbia international. (Sun on Sunday)

Manchester United midfielder Marouane Fellaini has agreed a deal to join Turkish side Galatasaray. The 29-year-old Belgium international has less than a year left on his contract at Old Trafford.(Ajansspor, via Daily Star Sunday)

United have been linked with Anderlecht midfielder Leander Dendoncker, 22, and the Belgian club's sporting director Herman van Holsbeeck says "if a club is willing to pay between 25m euros and 35m euros, we have a problem".(Het Belang van Limburg via Manchester Evening News)

Manchester City are back on Uefa's financial fair play watch list after a £220m spending spree this summer.(Sunday Telegraph)

Roma director of football Monchi says the club are "ready to look at other possibilities" after their most recent offer for Leicester City's Algeria winger Riyad Mahrez, 26, was rejected.(Evening Standard)

Tottenham's Belgium defender Toby Alderweireld says "zero progress" has been made regarding a new deal at the club. The 28-year-old has a contract that runs until 2019.(Sky Sports)

Antonio Conte will make a fresh plea for new signings next week after saying he fears being sacked as Chelsea boss. The Italian has spent £130m this summer.(Sunday Telegraph)

Newcastle want to sign Arsenal's Lucas Perez to be their main striker, despite the 28-year-old Spaniard's desire to rejoin former club Deportivo La Coruna.(Sun on Sunday)

Hull City are planning a permanent move for 29-year-old Bournemouth and Republic of Ireland defender Marc Wilson, who spent the second half of last season on loan at West Brom.(Mail on Sunday)

Sunderland have rejected a bid - thought to be from Turkish side Besiktas - for 29-year-old midfielder Jeremain Lens, but the Dutch international could still leave the Stadium of Light this week.(Chronicle)

Elsewhere, the Black Cats are stepping up their pursuit of 29-year-old Bournemouth and Ivory Coast winger Max Gradel.(Mail on Sunday) 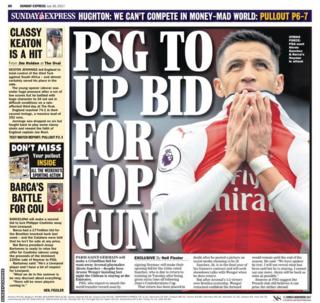 The Sunday Express leads on PSG's interest in Alexis Sanchez

Arsene Wenger was involved in a bust-up with a pitch invader during the 5-2 win over Benfica in the Emirates Cup. The Frenchman shouted back and forth with the fan, who was dragged off. (Sun on Sunday)

Liverpool boss Jurgen Klopp said defender Joe Gomez "had a lot of muscle and you only need muscles like that if you're only going to the beach" when the 20-year-old returned from injury but that he now looks "fit" and "sharp". (Liverpool Echo)

Barcelona and Brazil forward Neymar, 25, has agreed a five-year contract with Paris St-Germain and could complete a 220m euros (£197m) move to the French side next week. (RMC, via Metro)

PSG will offer former Manchester United winger Angel di Maria, 29, as part of the deal to reduce the taxes they will have to pay by triggering Neymar's buyout clause. (AS)

But Barcelona fear Liverpool will price them out of a deal for Coutinho. (AS)

Manchester City will offer Arsenal forward Alexis Sanchez, 28, a deal worth £320,000 a week to join them this summer. (Mail)