Tottenham manager Mauricio Pochettino has revealed he spoke to Chelsea striker Alvaro Morata about joining Tottenham but the 24-year-old did not want to compete with Harry Kane. (Daily Mail)

Arsene Wenger has told Arsenal striker Alexis Sanchez, 28, he will not be sold to another English club this summer. (Times - subscription required)

United have also made an enquiry about Anderlecht midfielder Leander Dendoncker, but are not expected to sign the 22-year-old this summer. (Manchester Evening News)

Liverpool are not interested in Barcelona midfielders Rafinha or Andre Gomes, both 24, who have been mentioned as part of a possible swap deal for Philippe Coutinho. (Liverpool Echo)

Manchester City striker Kelechi Iheanacho is finally having his medical at Leicester, who agreed a £25m fee for the 20-year-old Nigerian weeks ago.(Leicester Mercury)

The Manchester club have insisted on a £50m buy-back option for Iheanacho.(Daily Telegraph)

Arsenal are weighing up a move for 26-year-old Nice midfielder Jean Michael Seri.(ESPN)

Everton are considering a move for 23-year-old Lazio defender Wesley Hoedt, who is valued at £12m.(Liverpool Echo)

Valencia striker Alvaro Negredo, 31, is set to sign for Turkish club Besiktas, despite rival interest from Swansea City and Leeds.(AS - in Spanish)

Arsenal goalkeeper David Ospina, 28, plans to stay and fight for his place at the club next season.(London Evening Standard)

Leicester winger Riyad Mahrez, 26, is ready to force through a move to Roma, with the Foxes still reluctant to sell. (Daily Mirror)

Former West Ham striker Carlton Cole, 33, is on the verge of being sacked by Indonesian side Persib Bandung, whose manager said "he plays very badly" compared to other foreign players. (Daily Mail)

The Spanish club would be interested in one of four PSG midfielders in a possible part-exchange deal for Neymar: Angel di Maria, Julian Draxler, Adrien Rabiot and Marco Verratti. (Mundo Deportivo - in Spanish)

Brazil international Neymar is expected to return to training with his Barca team-mates on Wednesday. (ESPN)

Chelsea are considering an individual fitness regime for striker Diego Costa, 28, who is training away from the club in Brazil. (Daily Telegraph) 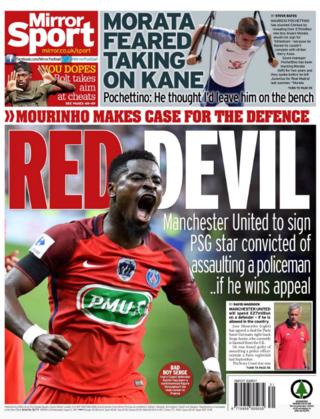 The Mirror back page on Wednesday

Former US international Freddy Adu, 28, has joined Polish club Sandecja Nowy Sacz on trial, despite their manager protesting against the move, describing it as "a joke". (Sportowefakty.pl, via Guardian)

Real Madrid forward Cristiano Ronaldo posted an Instagram picture with the caption: "What bothers people is my brilliance, insects only attack lamps that shine!" 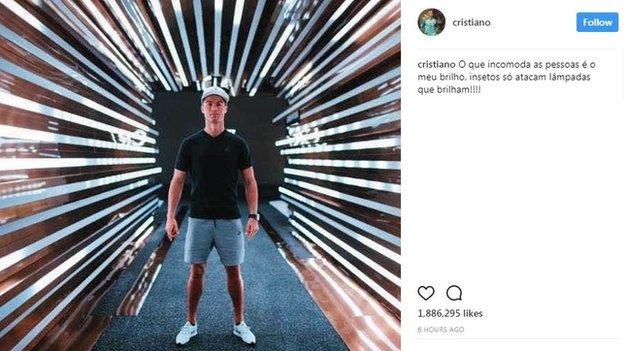 The manager of National League club Barrow wants to add "nastiness and horribleness" to his squad by bringing in "somebody who bites and scratches". (North West Evening Mail)

Dundee United have announced they are open to offers for their 30-year-old goalkeeper Cammy Bell... on Twitter. (Dundee United)

Liverpool forward Sadio Mane has emerged as a new target for Italian giants Inter Milan with the club expecting to bid £35m for the 25-year-old. (Daily Express)

Chelsea striker Diego Costa, 28, will not report for pre-season training with the rest of the squad on Tuesday as he continues to look for a move. (Marca)

Southampton defender Virgil van Dijk, 26, is set for talks with new manager Mauricio Pellegrino this week, with Liverpool prepared to break their transfer record to sign the Dutchman. (Liverpool Echo)

Liverpool are interested in Monaco's 21-year-old midfielder Thomas Lemar, who is also a target for Arsenal. (Le10Sport - in French)

Usain Bolt says he is waiting for a call from Jose Mourinho to join his beloved Manchester United before the transfer window shuts.(FourFourTwo)

Manchester United have reportedly agreed a deal of around £12m a year to have a certain dating application advertised on their shirts throughout the 2017-18 season. (Daily Mirror)