Roy Hodgson is finalising a deal to become the new Crystal Palace manager on a two-year contract, and will receive a bonus if Palace remain in the Premier League. (London Evening Standard)

Atletico Madrid are hoping to agree a £54m deal for Chelsea striker Diego Costa, 28, this week. (Marca, via Talksport)

Argentina forward Paulo Dybala, 23, will leave Juventus and is likely to end up in the Premier League, at one of Manchester United, Manchester City or Chelsea, according to super-agent Mino Raiola. (Rai, via Independent)

After Crystal Palace name Roy Hodgson as their new manager, BBC Sport looks at whether the former England boss is the right man for the job.

Hoffenheim boss Julian Nagelsmann has added to speculation that he could one day coach Bayern Munich by revealing his wife and children will move to Munich, and suggesting it is his dream club. (Eurosport - in German)

Former Sweden striker Zlatan Ibrahimovic, 35, had no intention of returning to Italy this summer rather than re-signing for Manchester United. (Gazzetta dello Sport, via Daily Express)

Liverpool target Stefan de Vrij, 25, is also attracting interest from Inter Milan and Juventus, who are keen to sign the Lazio defender on a free transfer. (Calciomercato via Teamtalk)

Arsenal could get the chance to sign Real Madrid striker Karim Benzema, 29, next summer as the Spanish club are interested in signing Atletico Madrid's Antoine Griezmann, 26, and Juventus forward Paulo Dybala, 23. (Don Balon via Daily Star)

Dybala has refused to rule out joining fellow Argentina international Lionel Messi at Barcelona but insists he is happy at the Italian club. (FourFourTwo)

Leicester are confident winger Demarai Gray, 21, will sign a new contract worth £50,000 a week. (Daily Telegraph)

Trabzonspor manager Muharrem Usta says he held "direct talks" with Arsenal midfielder Jack Wilshere, 25, about a loan move to the Turkish club "but the move stalled at the last moment". (Turkish-Football via Daily Star)

Bayern Munich forward Thomas Muller has said he considered moving to Manchester United two years ago - and the 27-year-old has not ruled out a move in the future. (Manchester Evening News)

Sporting Kansas City defender Erik Palmer-Brown, 20, has signed a pre-contract with Manchester City and will join the club in January. (ESPN)

Bayern Munich chief executive Karl-Heinz Rummenigge has criticised Robert Lewandowski after the 29-year-old striker questioned why the German champions did not match the summer spending of Paris St-Germain and Barcelona. (Daily Mail) 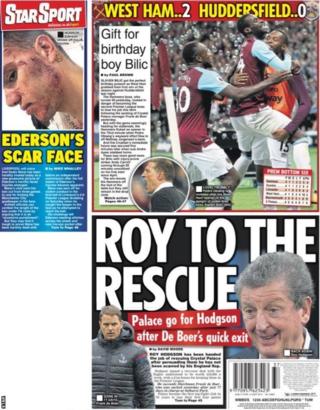 Real Madrid forward Gareth Bale, 28, says there was an "argument" for moving to Manchester United and becoming the team's biggest star but he stayed at the Bernabeu as "the main thing, when you look back on your career, is that you look at your trophies". (Daily Mail)

Roy Hodgson, who is set to be named as Crystal Palace manager, is set to get a minimum £1m bonus for keeping the club in the Premier League as part of any deal. (Daily Mail)

Only one Premier League player has been included in the top 10 ratings of Fifa 18, to be released at the end of the month. (Metro)

Crystal Palace defender Pape Souare broke his thighbone and jaw in a car crash last September, but a year on he had this announcement...

The Football League is set to sign a new five-year broadcast deal worth £600m, which will allow viewers to watch any midweek Championship games live. (Times - subscription required)

Southampton defender Virgil van Dijk suffered an unhappy return to Saints duty as he played in the under-23 side's 4-0 defeat by Aston Villa. (Sun)

The best of Monday's gossip...

Sam Allardyce is also being linked with a return to Crystal Palace. (Daily Mail)

But the former England manager has reiterated he does not want to return to Selhurst Park, despite saving Palace last season. (London Evening Standard)

Manchester United are keeping their number seven shirt free for 26-year-old striker Antoine Griezmann, whom they believe they can eventually sign from Atletico Madrid for £100m. (Daily Star)

Chelsea striker Diego Costa has relocated his family to Madrid as the 28-year-old expects a deal to be finalised which will allow him to rejoin Atletico. (Football 365)

Stoke City boss Mark Hughes could face a fine for pushing Jose Mourinho on the touchline during his side's draw with Manchester United on Saturday. (Times)