Manchester City manager Pep Guardiola has told midfielder Yaya Toure he must force his way back into his first-team plans, revealing the 34-year-old has been left out for "sporting" reasons. (Telegraph)

Arsenal have not held contract negotiations with midfielder Mesut Ozil since February. The 28-year-old Germany international has one year left on his deal. (SportBild via Metro)

Reports in Germany say Ozil is preparing to leave on a free transfer when his contract expires next summer. (Sun)

Chelsea striker Diego Costa, 28, has finally left Brazil and has arrived in Madrid to try to force through his transfer to Atletico. (Gianluca di Marzio via Metro)

After Crystal Palace name Roy Hodgson as their new manager, BBC Sport looks at whether the former England boss is the right man for the job.

Atletico are set to make a revised offer of £40m, plus £9m in add-ons and a £4m bonus payment, for the Spaniard's early release. (Mail)

Barcelona are set to renew their interest in Nice midfielder Jean Michael Seri, 26, in January after calling off the deal to pursue Liverpool's Philippe Coutinho, 25. (Sport via Sun)

Jose Mourinho said there was no specific reason behind his decision to leave out midfielder Ander Herrera, 28, from the Manchester United squad for their Champions League win over Basel. (Manchester Evening News) 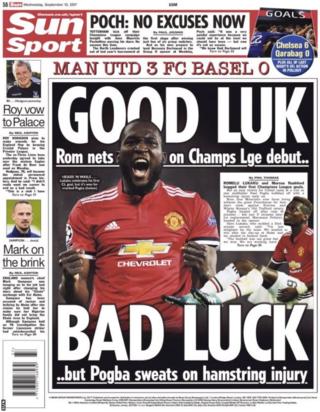 Tuesday was a big day for the Premier League as three title-chasing teams revealed their third kits... and they all featured a camouflage design. (Mail)

But Chelsea manager Antonio Conte confirmed Zappacosta's first goal for the club was supposed to be a cross. (Metro)

The best of Tuesday's gossip...

Argentina forward Paulo Dybala, 23, will leave Juventus and is likely to end up in the Premier League, at one of Manchester United, Manchester City or Chelsea, according to super-agent Mino Raiola. (Rai, via Independent)

Leicester are confident winger Demarai Gray, 21, will sign a new contract worth £50,000 a week. (Daily Telegraph)