Atletico Madrid are increasingly confident they have made a breakthrough in negotiations to re-sign 28-year-old forward Diego Costa from Chelsea. (Sky Sports)

Atletico are hopeful of concluding the deal for Costa within the next fortnight. (Daily Mail)

Costa was due to arrive back in London from Sao Paulo on a flight on Tuesday, but his ticket went unused. (Marca - in Spanish)

Arsenal manager Arsene Wenger denies reports that contract negotiations with playmaker Mesut Ozil have broken down. The 28-year-old's current deal at the Emirates expires at the end of this season. (Daily Mirror)

Inter Milan will offer 24-year-old striker Mauro Icardi a new contract with an increased release clause of more than £100m to try to ward off any approaches from Arsenal, Chelsea or Manchester United. (Premium Sport, via Talksport)

Former Chelsea boss Carlo Ancelotti will seek a return to the Premier League next summer if Bayern Munich trigger a break clause in his three-year contract as head coach. (ESPN)

RB Leipzig will offer Liverpool target Timo Werner a new contract, but insist they are under no pressure to sell the 21-year-old forward. (Sky Deutschland, via Talksport) 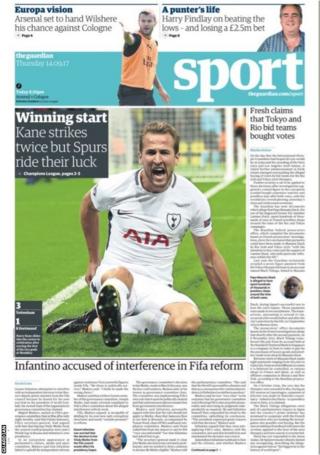 The best of Wednesday's gossip...

Manchester City manager Pep Guardiola has told midfielder Yaya Toure he must force his way back into his first-team plans, revealing the 34-year-old has been left out for "sporting" reasons. (Daily Telegraph)

Arsenal have not held contract negotiations with midfielder Mesut Ozil since February. The 28-year-old Germany international has one year left on his deal. (SportBild via Metro)

Reports in Germany say Ozil is preparing to leave on a free transfer when his contract expires next summer. (Sun)

Chelsea striker Diego Costa, 28, has finally left Brazil and has arrived in Madrid to try to force through his transfer to Atletico. (Gianluca di Marzio via Metro)