Inter Milan are hoping to beat Arsenal and Tottenham to the signing of 22-year-old Paris St-Germain and France midfielder Adrien Rabiot. (Calciomercato, via Talksport)

Barcelona president Josep Bartomeu says forward Lionel Messi is already playing under the terms of his new contract with the club, even though the 30-year-old has yet to sign it. (8TV, via Sun)

Tottenham boss Mauricio Pochettino says midfielder Dele Alli, 21, needs to keep his focus on his football as six of football's biggest agencies try to sign him up. (Telegraph)

Tottenham defender Toby Alderweireld, 28, says he is concentrating on trying to win trophies with Spurs while the Belgium international's father and agent sort out his contract. (Talksport)

RB Leipzig forward Timo Werner is open to a move to the Premier League, but Real Madrid are likely to rival any bid for the 21-year-old Germany international. (Don Balon, via Daily Star)

Everton defender Michael Keane, 24, says former club Manchester United "showed a lot of interest" in signing him in the summer but he chose a switch to Goodison Park from Burnley for more first-team football as he "wasn't as big a fan" of United as he had been. (Times - subscription required)

Meanwhile, PSG forward Julian Draxler, 23, wants to move to Barcelona after losing his place to Neymar but a move in January could be in doubt as he played against Celtic in the Champions League and would be ineligible to play for another team in the competition this season. (Don Balon, via Daily Express)

Chelsea striker Alvaro Morata, 24, says Manchester United were interested in signing him in the summer but that he "didn't think twice" about switching from Real Madrid to Stamford Bridge. (Daily Mail)

Stoke goalkeeper Jack Butland believes he can become England number one while playing for the Potters, but the 24-year-old also wants Champions League football. (Daily Mirror)

Bayern Munich and Germany forward Thomas Muller, 28, has admitted he considered leaving the Bundesliga champions for Manchester United in 2015. (Kicker, via Independent)

Manchester City and France left-back Benjamin Mendy, 23, would not have left Monaco if Chelsea was his only option, says Monaco's vice president Vadim Vasilyev. (L'Equipe, via Independent)

West Brom's Chinese owners have rejected an approach from a US investor to buy the club. (Bloomberg)

Everton have to sign a number nine in the January transfer window to stand any chance of qualifying for Europe, says former England midfielder Owen Hargreaves. (BBC Radio 5 live In Short)

Athletic Bilbao defender Aymeric Laporte, 23, will reject a move to Barcelona in order to sign for Real Madrid. (Don Balon - in Spanish)

Former Newcastle midfielder Nolberto Solano, 42, is being lined up as the next manager of Gillingham, whose current boss Adrian Pennock says he is unaware of any plans to replace him.(Kent Online) 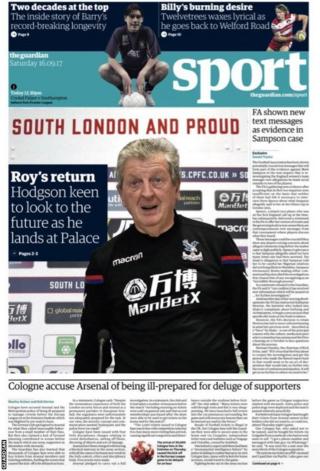 The Guardian Sport on Saturday

From Bob Marley to Muhammad Ali, Watford striker Andre Gray has revealed the story behind his many tattoos. (Telegraph)

Newcastle's 22-year-old midfielder Isaac Hayden is a regular helper at one of the city's food banks. (Independent)

Burnley defender James Tarkowski, 24, has rejected an approach to play for Poland as he is hopeful of turning out for England. (Times - subscription required)

Bayern Munich boss Carlo Ancelotti wants to stay with the club "for a long time", despite speculation surrounding his future. (FourFourTwo)

Liverpool fans have suggested former midfielder Steven Gerrard looks more like current Reds right-back Jon Flanagan after he was brought back as one of the club's 'legends' in Pro Evolution Soccer 2018. (Sun)

Manager Rafael Benitez says he missed part of Newcastle's 1-0 victory at Swansea last Sunday while watching at home because of illness - when a storm knocked out his TV signal. (Daily Mail)

The best of Friday's gossip...

However, Spain goalkeeper De Gea has hinted at a long-term Manchester United stay - by moving into a new house. (Sun)