Manchester City will open talks with Kevin de Bruyne, 26, over a new contract and the Belgium midfielder could double his existing £6m-a-year wages. (Daily Telegraph)

City are also interested in signing Bayern Munich striker Robert Lewandowski, 29, as Pep Guardiola is keen on being reunited in January. (Sun)

Real Madrid have started talks with Arsenal striker Alexis Sanchez, 28, over a move in January - but senior players at the Spanish club don't want the Chilean to join. (Don Balon - in Spanish)

Tottenham Hotspur striker Fernando Llorente, 32, says he was offered a new Swansea City contract but could not turn down the chance to join Spurs. (Wales Online)

'A goal to remind me of Maradona'

Who makes Garth Crooks' team of the week?

Liverpool playmaker Philippe Coutinho, 25, has spoken about his failed move to Barcelona and says he was "honoured" to have been wanted by the La Liga side. (EPSN)

Chelsea midfielder Cesc Fabregas, 30, says Arsenal passed up on the opportunity to re-sign him when he returned to England from Barcelona in 2014. (Metro)

The United manager also believes former striker Wayne Rooney, 31, will return to Old Trafford in the future after leaving for Everton in the summer. (Daily Mirror)

Celtic midfielder Scott Brown, 32, hasn't ruled out signing another contract extension at the age of 34 despite only penning a new two-year deal last week. (Daily Record via CelticTV)

Arsenal striker Danny Welbeck, 26, could face a lengthy lay-off after limping off with a suspected groin tear in the 73rd minute against Chelsea. (Daily Telegraph) 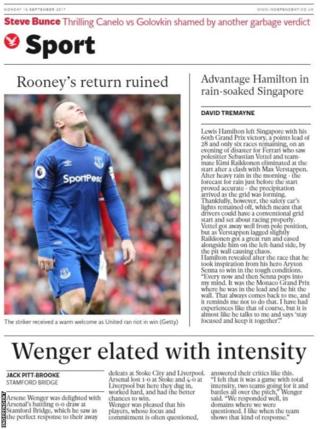 Striker Oumar Niasse put a smile on some Everton fans' faces on Sunday, by sitting in the away end at Old Trafford during their defeat at Manchester United. (Liverpool Echo)

Paris St-Germain could run out of Neymar shirts after selling 120,000 in the last month. (Daily Mail)

Chelsea striker Diego Costa, 28, has reportedly sold his fleet of cars as he prepares to leave Stamford Bridge and return to Spain. (Daily Mirror)

Everton fans are questioning their club's decision to sign a sleeve sponsorship deal with Angry Birds as they are worried the logo may contain red. (Daily Mail)

Former England manager Sam Allardyce, 62, could appear on ITV's 'I'm A Celebrity... Get Me Out Of Here' for a six-figure sum. (Sun)

The best of Sunday's gossip...

Tottenham are interested in Barcelona midfielder Andre Gomes, 24, which could put any move for Everton's Ross Barkley, 23, in doubt. (Sun on Sunday)

Leicester are set to complete the £22m signing of Sporting Lisbon midfielder Adrien Silva after approval from Fifa. (Sunday Mirror)