Atletico Madrid have given Chelsea a final "take it or leave it" offer worth £57m for 28-year-old striker Diego Costa. (Marca via Talksport)

Tottenham midfielder Dele Alli, 21, is not in negotiations with the club over a new contract, according to Spurs manager Mauricio Pochettino. (Daily Express)

Manchester United midfielder Marouane Fellaini, 29, is yet to accept a new contract offer as his advisers hold out for an improved deal. (Daily Mail)

Sunderland have said the £30m sale of goalkeeper Jordan Pickford, 23, to Everton in the summer was needed to keep the club running. (Daily Mirror)

Midfielder Jack Wilshere, 25, wants West Ham to make another bid for him after failing to win back a first-team place at Arsenal. (Daily Star)

Is there a new Yorke & Cole partnership?

City's 20-year-old Brazil forward Gabriel Jesus, who is already on £70,000 a week, is in line for a significant pay rise in recognition of an outstanding first nine months at the club. (Daily Telegraph)

Chelsea forward Eden Hazard, 26, has dealt Paris St-Germain a major blow by saying he will only return to France to play for former club Lille. (SFR Sport, via Metro)

Premier League clubs are hoping to capitalise on the closure of Huddersfield Town's academy by recruiting some of their young players for free. (Daily Mail)

Derby County could make a move for midfielder Joe Ledley, 30, who is a free agent after leaving Crystal Palace in the summer. (Derby Telegraph)

Defender Rolf Feltscher, 26, has left Birmingham City where he had been training in an attempt to earn a contract. His departure follows the sacking of manager Harry Redknapp. (Birmingham Mail)

Former Blues coach Steve Cotterill is willing to return to Birmingham as manager, despite feeling "betrayed" after Redknapp took the job ahead of him over the summer. (Daily Mirror) 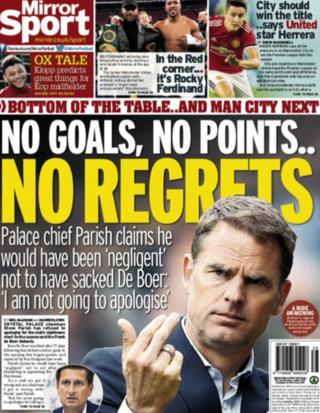 Crystal Palace chairman Steve Parish claims he would have been 'negligent' not to have sacked Frank de Boer, according to the Daily Mirror

Sheffield Wednesday supporters will finally be able to get their hands on their team's new kit... more than six weeks into the season. (Daily Mail)

Championship side Barnsley are taking about 3,000 fans to Wembley for Tuesday's EFL Cup third-round tie with Tottenham Hotspur. (Yorkshire Post)

Genoa's 16-year-old striker Pietro Pellegri became the youngest player ever to score a Serie A double - reducing his father, Marco, to tears in the process. (Daily Telegraph)

Some of Arsenal's players "enjoyed not having Alexis Sanchez or Mesut Ozil in the team" during Sunday's draw at Chelsea, according to Rory Smith of the New York Times newspaper. (BBC Radio 5 live)

The best of Monday's gossip...

Manchester City will open talks with Kevin de Bruyne, 26, over a new contract and the Belgium midfielder could double his existing £6m-a-year wages. (Daily Telegraph)

City are also interested in signing Bayern Munich striker Robert Lewandowski, 29, as Pep Guardiola is keen on being reunited in January. (Sun)

Real Madrid have started talks with Arsenal striker Alexis Sanchez, 28, over a move in January - but senior players at the Spanish club don't want the Chilean to join. (Don Balon - in Spanish)

Tottenham Hotspur striker Fernando Llorente, 32, says he was offered a new Swansea City contract but could not turn down the chance to join Spurs. (Wales Online)