Chelsea manager Antonio Conte retains the support of the board despite Tuesday's Champions League defeat at Roma. (Mirror)

Nuno Espirito Santo is considering an offer to take over at Everton following the sacking of Ronald Koeman, but is inclined to stay at Wolverhampton Wanderers.(Guardian)

Gremio's 24-year-old attacker Luan, who is a target for Barcelona, Liverpool and Arsenal, has signed a contract extension to stay in his native Brazil until 2020. (Goal)

Why record-breaking Aguero is so special

Everton's caretaker boss David Unsworth believes he has two games to convince the club's owners he deserves the job on a permanent basis. (Liverpool Echo) 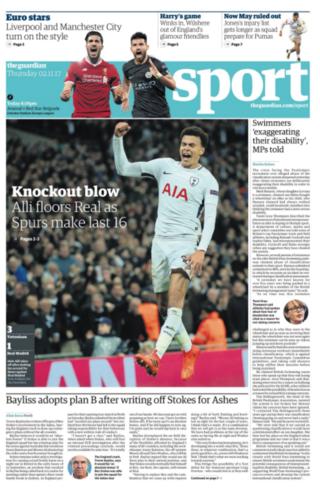 The Guardian sport section on Thursday

Besiktas fans thought they had spotted Manchester United midfielder Marouane Fellaini meeting with officials from their club in an Istanbul hotel - but it was Fellaini's twin brother Mansour. (Daily Mail)

Egyptian club Al-Ahly's training session on Tuesday was cancelled because too many fans showed up to watch. (Video 7 via Guardian)

Watford midfielder Tom Cleverley, 28, could be recalled to the England squad for friendlies against Germany and Brazil in November. (ESPN)

Leeds United have appointed a free-kick specialist to their backroom staff. Gianni Vio built his reputation as an expert with set-piece routines during spells with Fiorentina, AC Milan and Brentford. (Yorkshire Evening Post)

The best of Wednesday's gossip

Former England boss Sam Allardyce is to hold talks with Everton over their vacant managerial position, but he wants a lucrative contract. (Sun)