Chelsea and Brazil defender David Luiz was left out of the squad for the 1-0 victory over Manchester United after the 30-year-old questioned Conte's tactics in the build-up to the game. (Times - subscription required)

Watford boss Marco Silva refused to answer questions about the Everton job after his team's dramatic 3-2 defeat against the Toffees at Goodison Park. (Liverpool Echo)

Roma say they and Barcelona were interested in signing Leicester winger Riyad Mahrez, 26, last summer - but neither side were prepared to meet the Algeria international's £50m asking price. (Daily Mirror)

West Brom manager Tony Pulis is "not worried" that a 10-game winless run and a third straight defeat will force the club's board to sack him. (Birmingham Mail)

Aston Villa have no plans to sell Scott Hogan, 25, Henri Lansbury, 27, Jack Grealish, 22, or James Bree, 19 - who have all been linked with exits from Villa Park - in the January transfer window. (Birmingham Mail) 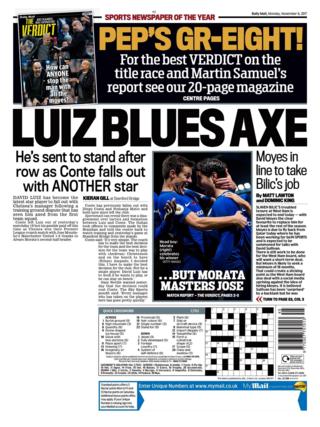 David Luiz faces the axe at Chelsea after a row with Antonio Conte, according to the Daily Mail

Former referees' chief Keith Hackett has agreed with Arsenal manager Arsene Wenger that standard of refereeing is getting worse every year. (Telegraph)

Huddersfield's Elias Kachunga was back at the club on Sunday morning despite playing in the 1-0 victory over West Brom the afternoon before. 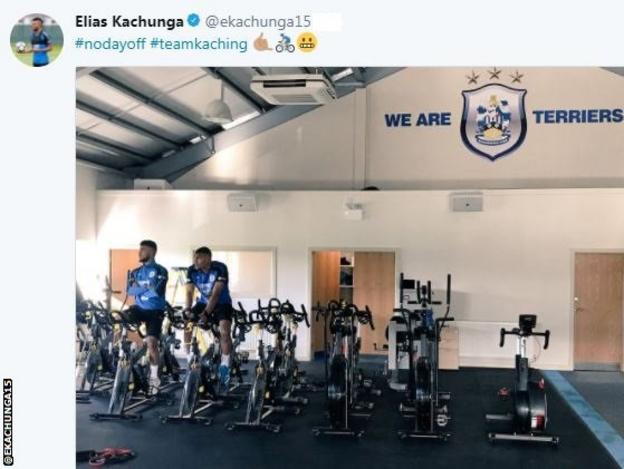 Tottenham striker Harry Kane was not on the scoresheet as they saw off Crystal Palace 1-0 with a Son Heung-min goal to move level with Manchester United on 23 points, but the England international was keen to highlight the importance of the three points. 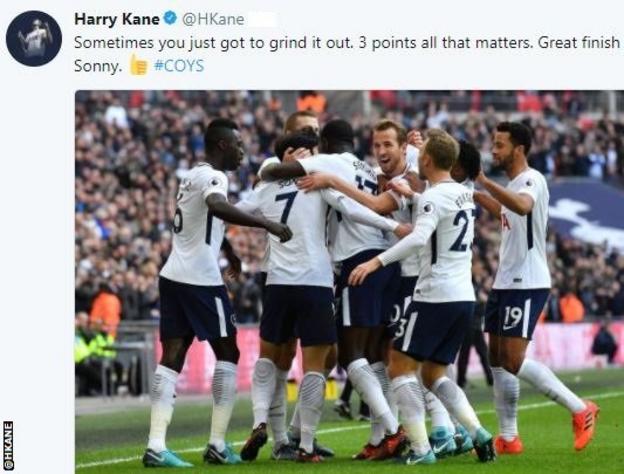 Spurs boss Mauricio Pochettino took Kane off against Crystal Palace following a heavy tackle and has urged England boss Gareth Southgate not to take any chances with the 24-year-old in the forthcoming friendlies against Germany and Brazil. (Telegraph)

Long-term Manchester United target Antoine Griezmann was captured in a curious photograph in which he turned his back on a group shot with his Atletico Madrid team-mates before their game with Deportivo La Coruna. (Marca)

Former Everton midfielder Tim Cahill says he has an "outside chance" of recovering from an ankle injury to play for Australia in a World Cup play-off against Honduras.(Guardian)

Who is 'the gazelle' in Garth Crooks' team of the week?

Brighton forward Glenn Murray believes the club have surpassed their own expectations with 15 points from 11 Premier League games, a start that has left them in eighth place after this weekend's matches. (Argus)

Swansea fans were seen fighting among themselves in the East Stand at the Liberty Stadium following their defeat against Brighton. (This is South Wales)

American actress Julia Roberts, thought to be a Manchester United fan, was spotted on the pitch at Stamford Bridge clutching a ball after Chelsea's 1-0 victory over the Red Devils. (Daily Mail)

Coach loads of Newcastle fans caused "mayhem" in a quiet Lancashire village on their way to watch the Magpies play at Burnley last month. (Newcastle Chronicle)

The best of Sunday's gossip

David Moyes is in pole position to take over at West Ham until the end of the season, should Slaven Bilic be sacked. (Sunday Telegraph)

Bayern Munich have ruled out re-entering the race to sign Arsenal star Alexis Sanchez, 28, because they believe he has already decided his next destination. (Metro)

Midfielder Cesc Fabregas, 30, has confirmed he wants to sign a new contract at Chelsea despite interest from Manchester United. (London Evening Standard)

Real Madrid are considering a move for Tottenham duo Harry Kane, 24, and Dele Alli, 21, after their impressive displays against the Spanish giants in the Champions League. (Marca)