Sam Allardyce says that he has received no contact from Everton about the vacant managerial position at Goodison Park, but has suggested he would be willing to speak with the Merseyside club. (Talksport)

Real Madrid are planning to bid for Manchester United midfielder Juan Mata in January. The 29-year old Spaniard, omitted from United's team against Chelsea at the weekend, is out of contract next summer. (Daily Express)

Manchester United midfielder Marouane Fellaini, 29, is wanted by Turkish side Besiktas, who could make a move to sign him in January. (Daily Star)

West Ham may have to sell some of their younger players, including defender Reece Oxford, 18, and midfielder Josh Cullen, 21, in order to free up January funds for new manager David Moyes. (Daily Mirror)

Arsenal forward Mesut Ozil, 29, has suggested that he could sign a new contract, if the club give him Jack Wilshere's number 10 shirt. (Sun)

Arsenal are trying to re-sign 25-year-old Turkey midfielder Oguzhan Ozyakup from Besiktas, five years after selling him to the Turkish side for just £400,000. (Fotomac, via Metro)

Tottenham are preparing an £8.8m bid for 27-year-old Besiktas midfielder Tolgay Arslan. (Fotomac via This is Futbol)

Newcastle United are interested in signing Liverpool striker Danny Ings, 25, on loan in January, regardless of whether or not owner Mike Ashley achieves his aim of selling the club by Christmas. (Newcastle Chronicle)

Arsenal's hopes of signing midfielder Arda Turan, 30, have been boosted after he was told he could leave Barcelona in January. (Sport, via Daily Mail)

Leicester City striker Islam Slimani wants to leave the club in January. Crystal Palace and French club Rennes have been linked with the 29-year old. (L'Expression via Sport Witness)

Besiktas striker Cenk Tosun, 26, who Crystal Palace tried to sign in August, says he is "very happy" the move to the Eagles did not go through. (Croydon Guardian)

Southampton are lining up a January move for Monaco striker Stevan Jovetic. The Montenegro striker, 27, has already played in England with Manchester City. (Daily Mirror)

Major League Soccer side Real Salt Lake hope to turn Brooks Lennon's loan move from Liverpool into a permanent transfer. The 20-year-old forward has been with the American side since January. (ESPN FC)

Liverpool and England midfielder Adam Lallana, 29, will play for the first time this season in a behind-closed-doors match next week after suffering a thigh injury in the summer. (Daily Telegraph)

West Brom owner Guochuan Lai will fly in from China to assess their form as manager Tony Pulis fights for his job. (Times - subscription required)

Former West Ham striker Tony Cottee has criticised the decision to only give the club's new manager David Moyes a short-term contract until the end of the season. (Express)

Sacked Hammers manager Slaven Bilic rang his players to ask where he went wrong - and was told he had not been tough enough on them. (Daily Mirror)

Emenalo's successor at Chelsea is likely to answer to director Marina Granovskaia rather than Abramovich. (Guardian)

Premier League players have taken to social media to pay tribute to Andrea Pirlo, who announced his retirement on Monday. 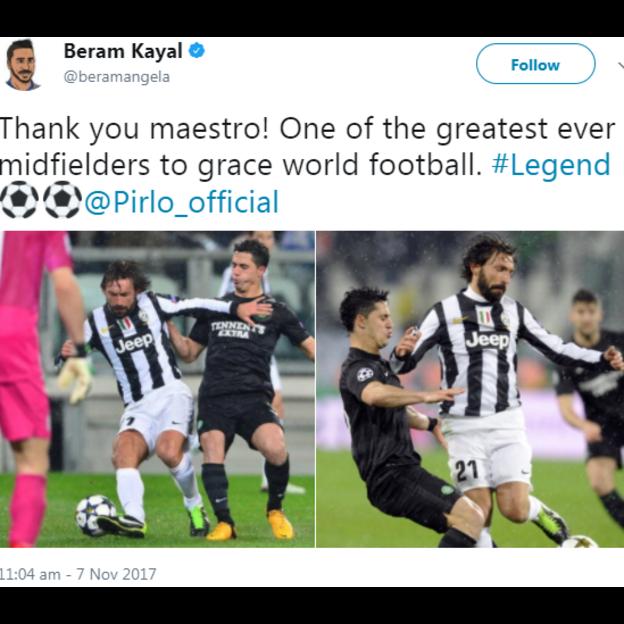 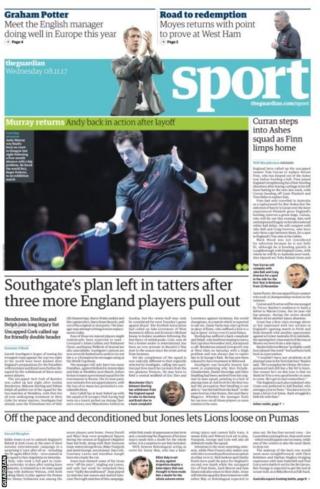 The best of Tuesday's gossip

Southampton and Netherlands defender Virgil van Dijk, 26, says he is "happy" and "giving 100%" for the club - despite handing in a transfer request in the summer after being linked with Liverpool. (Southern Daily Echo)