Arsenal forward Alexis Sanchez, 29, is nearing a move to Paris St-Germain after his agent flew to the French capital for talks. (Canal Plus - via Metro)

PSG will bid £25m to try to sign Sanchez, though Manchester City still want the Chile international after failing with a £60m bid in the summer. (Express)

Sanchez will stay at Arsenal until the end of the season, then join Manchester City on a free transfer in a deal that will earn him £400,000 a week. (Daily Mirror)

Atletico Madrid say 25-year-old full-back Sime Vrsaljko, a target for Liverpool, will not be moving next month. (Corriere dello Sport - via Daily Mirror)

Lemar is thought to prefer a move to Liverpool over a switch to Stamford Bridge or Arsenal. (Independent)

Arsenal boss Arsene Wenger says there is a 90% chance he will not add to his squad in January. (BeInSports - via London Evening Standard)

Valencia have agreed a £31m fee for Paris St-Germain winger Goncalo Guedes. The 21-year-old has been on loan at the Spanish club and has interested both Arsenal and Manchester United. (L'Equipe - via Sun)

Arsenal and Manchester City are monitoring Burnley centre-back James Tarkowski, 25, with a view to bidding for him next summer. (Times - subscription required)

Arsenal and Everton target Steven N'Zonzi appears to have been spotted at Gatwick Airport. The former Stoke and Blackburn midfielder, 29, has told Sevilla he wants to leave. (Sun)

The Magpies have also secured a loan deal for Chelsea winger Kenedy, 21, and he is set to arrive when the transfer window reopens next month. (Daily Mail)

Juventus midfielder Stefano Sturaro's agent says the 24-year-old, who is a target for Newcastle, could move in January. (Tribal Football - via Newcastle Chronicle)

West Brom will focus on signing Middlesbrough defenderBen Gibson if they sell Jonny Evans, 29. The Baggies will, however, meet stiff resistance from the Championship club for the 24-year-old. (Birmingham Mail)

Liverpool will refuse to let striker Daniel Sturridge leave in January, putting his hopes of featuring for England at the World Cup in jeopardy. Newcastle, West Ham and Stoke are interested in the 28-year-old. (Daily Mail)

Liverpool boss Jurgen Klopp has given Ben Woodburn the green light to leave the club on loan. Leeds United and Sunderland are keen on the 18-year-old forward. (Daily Express)

Inter Milan director Walter Sabatini has insisted the club have no desire to let Joao Mario, 24, leave in the January transfer window. The defender has been linked with Manchester United and Paris St-Germain. (Independent)

West Ham have been dealt a blow in their pursuit of Bologna forward Simone Verdi as the club's sporting director says the 25-year-old does not want to leave. (Sky Italia - via Talksport)

Goalkeeper Claudio Bravo, 34, has hinted at his frosty relationship with Manchester City boss Pep Guardiola but insists he has no desire to leave the Premier League leaders anytime soon. (Goal.com) 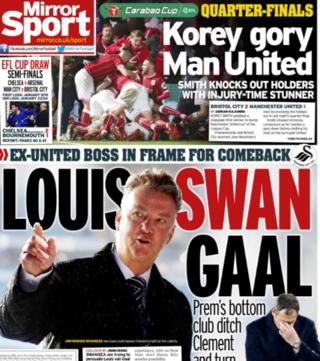 Mark Hughes will go into the home match against West Bromwich Albion on Saturday facing the sack if Stoke City show no sign of improvement and suffer a sixth defeat in seven games. (Guardian)

Keeping Swansea in the Premier League will be the "hardest" job any top-flight manager would have faced in the past three years, said former Scotland boss Gordon Strachan. (Sky Sports)

Former Arsenal forward Paul Merson has come under scrutiny for failing to pick Liverpool forward Mohamed Salah in his team of the season so far. (Liverpool Echo)

Arsenal midfielder Aaron Ramsey was one of several players wishing Tomas Rosicky luck in retirement. Ramsey wrote on Instagram: "Good luck Tommy in the next chapter of your life. It was a pleasure to play alongside you. Thank you for all the good times & I hope to see you soon!"

Newcastle United have joined the race to sign Chelsea defender David Luiz in the January transfer window, but are only interested in a loan deal for the Brazilian, 30. (Shields Gazette)

Leicester City are lining up a bid for Portugal and Benfica full-back Andre Almeida, 27. (Leicester Mercury)

Chinese club Chongqing Dangdai Lifan are not interested in signing Barcelona midfielder Andreas Iniesta as they believe he is not good enough to play in the Chinese Super League. (Marca via the Chongqing Morning Post)

Real Madrid are preparing to pay Athletic Bilbao and Spain goalkeeper Kepa Arrizabalaga's 20m euro release clause in January and want to confirm the 23-year-old's signing in the first week of the new year. (AS)

Barcelona defender Javier Mascherano, 33, is close to completing a move to Chinese side Hebei Fortune. (Sport)