Swansea are considering an approach for former Arsenal striker Dennis Bergkamp as their new manager after the 48-year-old Dutchmanwas sacked as Ajax assistant. (Daily Express)

Chelsea have offered to make Thibaut Courtois the best-paid goalkeeper in the world, putting a contract extension worth more than £200,000 a week deal on the table for the 25-year-old Belgium international. (Telegraph)

Barcelona and Spain midfielderSergio Busquets, 29, has been earmarked as a £50m replacement for Yaya Toure by Manchester City. (Daily Star)

Alternatively, Sunderland centre-back Lamine Kone could be set for a reunion with former manager Allardyce with Everton interested in a £10m January move. (Mirror)

Stoke City boss Mark Hughes is confident he retains the support of the club's board and can turn the Potters' fortunes around. (Talksport)

Newcastle are interested in Leicester and Algeria striker Islam Slimani, 29, but current takeover talks at St James' Park could scupper any deal in January. (Leicester Mercury)

Nice forward Mario Balotelli, 27, wants to move to a "big club" and would return to Manchester City for free. (Daily Mirror)

Chelsea boss Antonio Conte expects to strengthen his squad by adding a forward in January. (Independent)

Liverpool target Sime Vrsaljko, 25, will not be leaving Atletico Madrid in January, with the club's president insisting he will remain with the La Liga side. (Radio CRC, via Daily Star)

Stoke midfielder Stephen Ireland, 31, has agreed a new deal at the club. (ESPN) 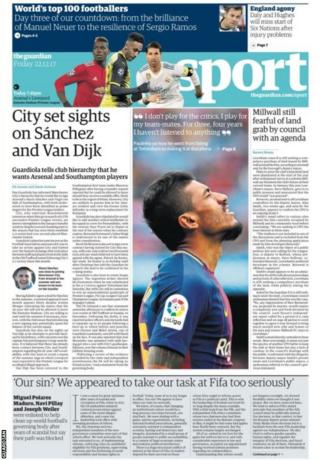 Manchester United legend and former assistant manager Ryan Giggs has criticised the club's transfer policy claiming he advised them to sign both now-Manchester City striker Gabriel Jesus, 20, and Paris St Germain forward Kylian Mbappe, 19 during his time on the staff. (The Times- subscription)

Juventus midfielder Sami Khedira has thanked Fifa for fixing his haircut after the game maker's initially gave him his old, longer look.

"I think I look quite realistic now, right? Thanks for fixing it," he said on Instagram. "I promise I'll never colour it blonde."

Atletico Madrid have sold their share in Ligue 2 side Lens, just 12 months after making the investment. (ESPN)

Liverpool midfielder Alex Oxlade-Chamberlain took a bit of a hammering from some pupils on a visit to a local school. (Twitter)

Former Chelsea boss Luiz Felipe Scolari says striker Nicolas Anelka got him the sack at Stamford Bridge - by refusing to play on the wing. (ESPN Brazil, via Daily Mirror)

Arsenal forward Alexis Sanchez, 29, is nearing a move to Paris St-Germain after his agent flew to the French capital for talks. (Canal Plus - via Metro)

PSG will bid £25m to try to sign Sanchez, though Manchester City still want the Chile international after failing with a £60m bid in the summer. (Express)

Sanchez will stay at Arsenal until the end of the season, then join Manchester City on a free transfer in a deal that will earn him £400,000 a week. (Daily Mirror)