Liverpool have been offered the chance to sign Paris Saint-Germain'sGerman goalkeeper Kevin Trapp, 27, in January. (Metro)

Manchester United have delayed handing manager Jose Mourinho a new contract, with his side falling further behind in the title race. (Mirror)

Olivier Giroud's agent is due in London for crunch talks this week over the 30-year-old Arsenal striker's future. (Mirror)

Arsenal midfielder Jack Wilshere, 25, is back in Gareth Southgate's England World Cup plans after returning to the Gunners' first-team. (Sun)

Arsenal have moved ahead of Manchester United and Chelsea in the chase for 20-year-old £30m-rated Bayer Leverkusen winger Leon Bailey. (Mirror)

Defender Virgil van Dijk, 26, was left out of the Southampton squad on Saturday, but manager Mauricio Pellegrino would not say anything about a possible January move to Liverpool. (Liverpool Echo) 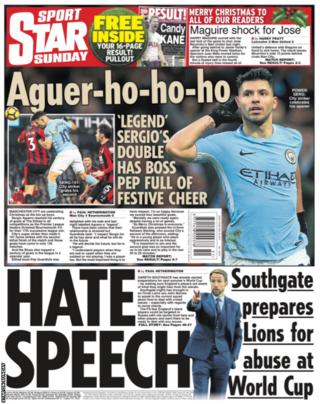 The back page of Sunday's Star

Manchester United's plans to increase Old Trafford's capacity have hit a stumbling block due to the £750m costs. (Sun on Sunday)

Tottenham boss Mauricio Pochettino is being lined up by Paris St-Germain as the French giants look to replace Unai Emery. (Mirror)

Tony Pulis, who was sacked by West Brom as boss last month, is favourite to take over at Middlesbrough following Garry Monk's departure. (Mail on Sunday)

Monk was sacked by Middlesbrough despite holding talks about transfers with the Teesside club earlier in the week. (Independent)

A party of 75 Borussia Moenchengladbach supporters will leave Germany on Christmas Day by coach for their 25th annual pilgrimage to support Liverpool at Anfield. (Liverpool Echo)

Crystal Palace boss Roy Hodgson is convinced forward Wilfried Zaha would be better equipped to deal with a high-profile transfer now than when he joined Manchester United four years ago. (Mail on Sunday)

Manchester City striker Sergio Aguero is growing disillusioned under Pep Guardiola, with the 29-year-old's long-term future at the Premier League leaders in the balance. (Mail on Sunday)

Arsenal forward Alexis Sanchez agreed a deal to stay at the club a year ago but changed his mind after the Gunners lost 10-2 on aggregate to Bayern Munich in the Champions League. (Times - subscription required)

Monaco vice-president Vadim Vasilyev says he is not thinking about selling Thomas Lemar, 22, next month with Arsenal, Chelsea and Liverpool all keen on the France winger. (Daily Star)