Manchester City are closing in on a £60m deal for Southampton defender Virgil van Dijk, 26. (Telegraph)

Meanwhile, the Red Devils have made an improved offer to Marouane Fellaini, to keep the 30-year-old midfielder - who will be out of contract in the summer - at Old Trafford. (Daily Express)

Arsenal have been told they must pay £40m to sign Germany forward Julian Draxler, 24, from Paris St-Germain. (Mirror)

The Gunners are in a bidding war with Liverpool for 22-year-old PSV Eindhoven forward Hirving Lozano, who is valued at £42m. (Daily Star)

However, bids in excess of £35m would tempt Arsenal to sell striker Alexis Sanchez, 29, in January. (Daily Mail)

Celtic have denied reports that they have accepted an £18m bid for striker Moussa Dembele, 21, from Brighton. (Sun)

Manager Roy Hodgson fears Crystal Palace will be forced to sell Wilfried Zaha next month, with Manchester City, Chelsea and Tottenham all interested in the 25-year-old winger. (Mirror) 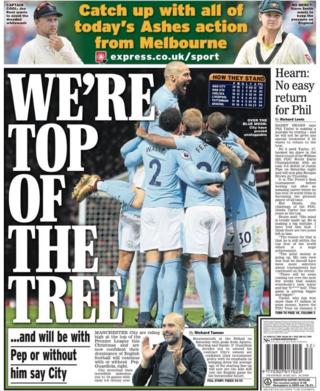 Everton boss Sam Allardyce has revealed he helped rebuild the confidence of defenders Michael Keane and Ashley Williams with the help of television game show The Cube. (Liverpool Echo)

Arsenal midfielder Jack Wilshere, 25, is back in Gareth Southgate's England World Cup plans after returning to the Gunners' first-team. (Sun)