Arsenal midfielder Mesut Ozil, 29, is top of Barcelona's transfer targets but the La Liga giants are looking at making five signings in the January transfer window. (Marca via Daily Express)

Southampton have finally admitted defeat in keeping hold of star defender Virgil Van Dijk, 26, but will not sell for less than £70m. (Sun)

Everton manager Sam Allardyce does not believe Arsenal's Olivier Giroud will be moving to Goodison Park in January as the striker's wife does not want to move north of Watford. (Liverpool Echo)

Juventus could use 22-year-old winger Marko Pjaca as part of a deal to sign Liverpool midfielder Emre Can, 23. (Tuttosport, via ESPN)

Inter Milan striker Mauro Icardi is yet to sign a new deal with the Serie A club, with Real Madrid interested in the 24-year-old. (Calciomercato, via Daily Express)

Former Sheffield Wednesday boss Carlos Carvalhal has emerged as a managerial target for Swansea City, as they refuse to rush their decision on replacing Paul Clement. (Wales Online)

Marouane Fellaini, 30, is unsure whether he will stay at Manchester United even if he is offered an improved contract. (Humo via Manchester Evening News)

Newcastle boss Rafa Benitez has to make some decisions on where some of his youngsters, who are currently out on loan, will spend the rest of the season. (Newcastle Chronicle)

Celtic manager Brendan Rodgers has warned it will take an "astronomical" bid to sign striker Moussa Dembele, 21, in January with Brighton, West Ham and Everton all keen. (Daily Mirror) 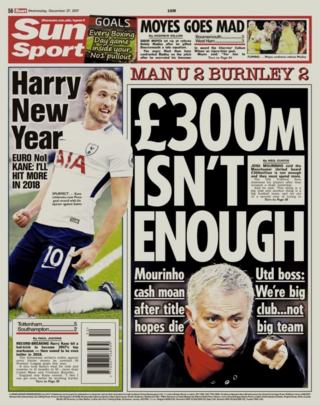 Manchester City's Vincent Kompany has been giving his team-mates regular reminders of how Manchester United blew the lead in the title race in 2012 to warn against complacency. (Telegraph)

Former Arsenal defender Emmanuel Eboue, 34 has received offers of legal advice in his bid to overturn a court ruling set to leave him homeless in the wake of his divorce. (Mirror)

Manchester City are closing in on a £60m deal for Southampton defender Virgil van Dijk, 26. (Telegraph)

Meanwhile, the Red Devils have made an improved offer to Marouane Fellaini, to keep the 30-year-old midfielder - who will be out of contract in the summer - at Old Trafford. (Daily Express)

Arsenal have been told they must pay £40m to sign Germany forward Julian Draxler, 24, from Paris St-Germain. (Mirror)