Paris St-Germain are monitoring Marouane Fellaini's situation at United and would be keen to sign the 30-year-old midfielder on a free transfer next summer. (Daily Mirror)

Liverpool flew a team of doctors to assess Southampton's 26-year-old defender Virgil van Dijk so they could complete his £75m signing as quickly as possible - and before Manchester City could rival their interest. (Liverpool Echo)

Atletico Madrid are happy to sell winger Yannick Carrasco, 24, in the January transfer window. (AS)

Chelsea failed in a bid for the Belgium international last summer but could return with a new offer. (Sun)

West Ham United are closing in on the signing of 23-year-old Swansea defender Alfie Mawson. (ESPN)

Who's on the move in January?

Arsenal have had a £35m bid for defender Medhi Benatia, 30, rejected by Juventus. (Calciomercato, via Daily Star)

Everton have made Besiktas striker Cenk Tosun, 26, their number one target in January and could pay £20m for the Turkey international. (Liverpool Echo)

Watford are in talks with midfielder Abdoulaye Doucoure, 25, over a new five-year deal that could be worth £70,000 a week. (Sun)

Athletic Bilbao are "still waiting" for a reply from their goalkeeper Kepa Arrizabalaga, 23, regarding talks to renew his contract amid interest from Real Madrid. (El Pais - in Spanish)

Norwich are keen to sign Lyon's 21-year-old attacking midfielder Aldo Kalulu, who has been on loan at Sochaux. (France Football - in French) 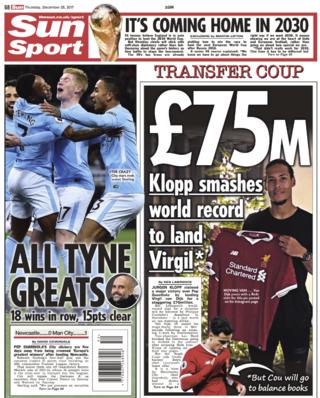 The Sun's back page on Thursday

The Football Association is confident England will be one of the leading contenders to host the 2030 World Cup. (Sun)

In reference to Jose Mourinho's comments about not being able to spend enough at Manchester United, Arsenal boss Arsene Wenger says he has "been in that position for 21 years" so will "not start to complain now". (Daily Telegraph)

Arsenal midfielder Mesut Ozil, 29, is top of Barcelona's transfer targets but the La Liga giants are looking at making five signings in the January transfer window. (Marca via Daily Express)

Everton manager Sam Allardyce does not believe Arsenal's Olivier Giroud will be moving to Goodison Park in January as the striker's wife does not want to move north of Watford. (Liverpool Echo)

Juventus could use 22-year-old winger Marko Pjaca as part of a deal to sign Liverpool midfielder Emre Can, 23. (Tuttosport, via ESPN)