Borussia Dortmund attacking midfielder Christian Pulisic, 19, has refused to rule out a potential move to Manchester United, the club he supported as a child. (Mail)

Leicester's 26-year-old Algeria winger Riyad Mahrez wants his club to guarantee he will be allowed to leave this summer before returning to training. (Times - subscription required)

Arsenal's French striker Alexandre Lacazette is under big pressure at the Emirates and could face a summer exit according to former Gunners player Emmanuel Petit. (Sun)

Mahrez's advisers claim the Foxes had already agreed to let him leave if a big club offered £50m but still rejected a Manchester City bid in January. (Mirror)

France and Monaco forward Thomas Lemar, 22, is not on Liverpool's list of targets for the summer transfer window. (Liverpool Echo)

Germany boss Joachim Low is Real Madrid's preferred option to replace Zinedine Zidane as manager at the end of the season. (Mundo Deportivo - in Spanish)

Pita 'The Penguin' and Cool Runnings

Test yourself on the Winter Olympics

Former Watford manager Marco Silva is threatening the club with legal action because he is yet to receive compensation after being sacked in January. (Times - subscription required)

Arsenal's 26-year-old midfielder Jack Wilshere will take a pay cut to sign a new deal at the club. (Mail)

Juventus are confident they will sign Liverpool's Germany midfielder Emre Can, 24, when his contract expires in the summer. (Mirror)

Bayern Munich's Poland striker Robert Lewandowski, 29, says rumours of a summer move to Real Madrid "do not interest" him. (Bild - in German)

Leicester and West Ham are keen to sign 21-year-old English forward Patrick Roberts, who is on loan at Celtic from Manchester City. (Sun)

Former Arsenal and Tottenham defender Sol Campbell has held talks with Oxford United as the League One club look to appoint a new manager. (Mail) 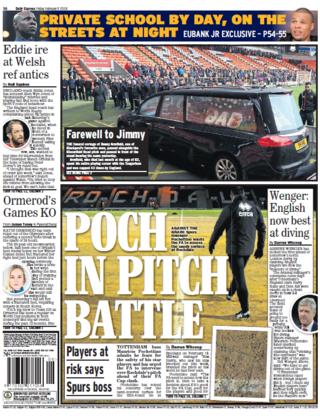 Daily Express back page on Friday

Facebook, Google and Netflix will not be submitting bids for the next round of Premier League TV rights. (Guardian)

Liverpool are preparing a second move for Monaco's 22-year-old France midfielder Thomas Lemar, after he turned down a new contract at the Ligue 1 club. (Independent)

Luis Enrique, the former Barcelona boss who has been linked with replacing Antonio Conte at Chelsea, is preparing for a move to England. The 47-year-old does not want to take over until the end of the season. (Telegraph)

Shakhtar Donetsk midfielder Fred has chosen Manchester City as his next club, according to former coach Mircea Lucescu. The 24-year-old Brazil international has also been linked with City's neighbours Manchester United. (Mirror)